LET GO OF THE WAY YOU ARE GOING

"
Come waltz with me and let go of the way you are goingCome talk to me and I'll tell you what's really worth knowingLife's much too good, my friend. Don't let it end.Come dance with me and I'll give you a gift worth givingTake a chance with me and I'll show you a life that's worth livingLife's much too good, my friend. Don't let it end."
Excerpt from Demis Roussos "Come waltz with me".
When you look at this video, notice how the dancing of the men and the women is different, but complementary, and supportive of each other. Each pair achieves a balance, then each pair dances in harmony with the other pairs. In some dances of the world, the pairs swap over, but the dancing goes on. So it is , with the peaceful interactions, cultural exchanges, help in disasters, and trade, between countries in peacetime. Time is the music.

The dancers are very light, like feathers settling from the air. That is the diplomatic touch that leaders in the world need to have while dealing with each other. Imagine if that lovely Russian palace were to be hit by a massive warhead, nuclear or otherwise. Unthinkable? No, it could happen. Today a medieval mosque was obliterated in Mosul in the Middle East. Let's put the big bombs away, leaders. How about earning the Peace Prize by actually making peace. Now there's a radical new concept.
The Grand al-Nuri Mosque of Mosul with its famous leaning minaret was originally an ancient pagan temple to the Sun god, then a Byzantine church to St John the Baptist, then a mosque from the 1100s. Now it's a pile of rubble, like half of Syria, and its people's shattered lives. The interior: 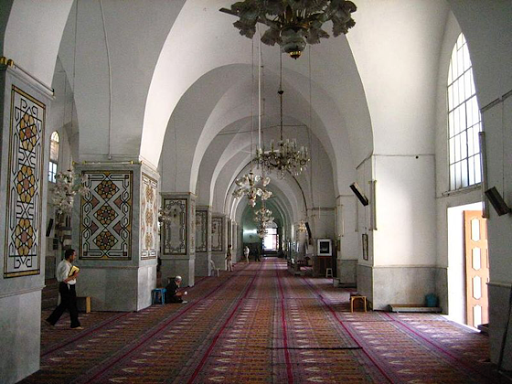 Thankyou to zozo 2kx for gifting this irreplaceable photo to the public domain.
" Life's much too good, my friend. Don't let it end."
Posted by Running on empty at 19:54

This is such a true analogy....we could be light hearted and carefree and be struck down in a second. The leaders of the world hold all the cards and we are on borrowed time. Grab each moment and enjoy the waltz.

Cheers to that KE!
I truly loved that video. Beautiful humans in fabulous costumes, surrounded by majesty, dancing in perfect synchronicity.
I was captivated and smiling because at our best that's what we're capable of.
Then came the recognition that they were all dancing to the same tune and had been in training to do so for a lifetime. That lifetime had very probably been one of privilege too.

Unfortunately people don't like dancing to the same tune and their upbringing and 'training' is every shade from purest white to the deepest black...........Different music, you need different shoes, and a different outfit, and then the ballet dancers will feel left out, and the resentments and the struggles begin.......next thing you know the rappers have moved in and the palace has become a crack den.......:)!

We like to applaud 'difference' but in reality we have quite a narrow margin of true acceptance of it because it unsettles us and I think some form of prejudice lurks under the surface of us all. Wars are just an awful escalation of that really.

I'd love to think all the leaders of the world were peaceful rational humanitarians with a high intellect and purpose, but their versions of what the world should look like depends on their 'training' and I reckon the best we can ever expect from their 'dance' is a Grandads mosh pit where they're all moaning about the music being too loud because THEY can't be heard and the inevitable scuffle would break out shortly followed by threats of my warheads bigger than yours. Sigh....

I agree with your insight about wars being an escalation of our inner conflicts.

Blaming our leaders for the state of the world is like blaming the weather, except we have less control over the weather.


In some countries you can vote directly for the leader, like the US. In others,they are decided by the party that wins. In our country the leader has been changed by the party while in office, that used to be rare, but not anymore.

Proportional representation always sounds a more democratic way of doing things? (I'm no expert but surely all votes should matter)

It seems to work in Denmark but then again the Scandinavians always seem to be a bit fairer and more progressive than us in quite a few areas. Again no expert, just an impression.