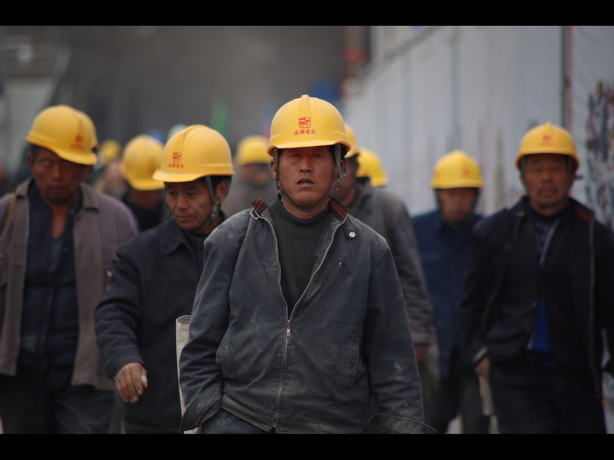 Dan is good for me.
If you're new, Dan Copping is a very good writer and commenter on this blog, and elsewhere. Dan is approximately twenty years younger than me. We do not always agree. That is ok.
To be relevant to this particular post, one way that Dan is good is because he teaches me to accept new things. He's part of a generation that was born when the Internet was a baby. He, and it, grew up together. He's forward thinking, accepting of a future that will look very different from today in very many ways. I have qualms, especially about how my children will earn a living. I want them to have an income, and a purpose in life.
"I never really was that good in school
I talked too much, I broke the rules
Teachers thought I was a hopeless fool, alright

Excerpt from "Wait and See", sung by Brandon Heath

It's this AI thing, Artificial Intelligence. I saw the writing on the wall when my gifted son was very young. As he, and his sister grew, I cautioned them to work hard at school , do as well as they could, because manual, unskilled jobs would be disappearing. What I got wrong was the speed of that. I thought we had more time, (pretty much what the pundits are saying about North Korea's nuclear capability). Instead of happening in ten years time, the day of the smart machines and robots is now.
Now. A robot in Australia can do the job of a human, at a rental to the business owner, of only $15 au per hour, apparently. That's less than the minimum adult wage, plus entitlements. If the rental drops, it could conceivably get lower than the youth wage. Is this why there are now keypads for you to put your order at McDonalds? Will the cooks and customer service staff be phased out?
"While he expects the number of jobs to increase, the danger is they may not be better jobs. Those working for machines will experience the most disruption." Taken from an ABC article listed at the bottom of this post. "Those working for machines" ... say what now? What? Who is deciding that we should work FOR machines, and who is letting them decide that?
This came in the post for Acerules' party. 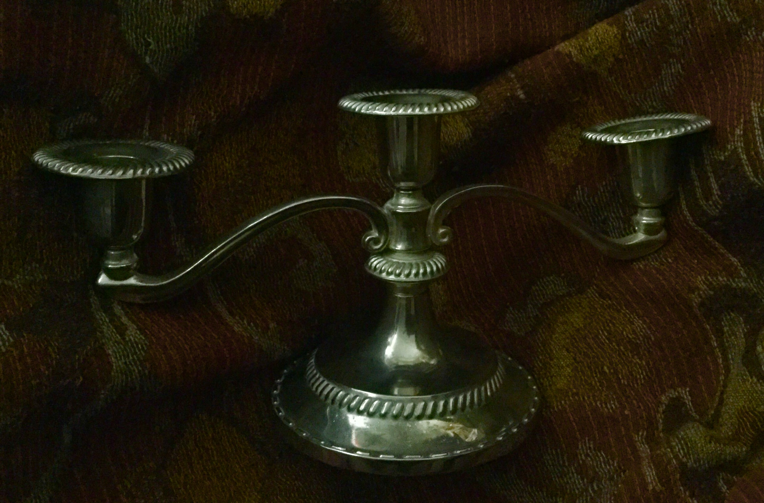 It's secondhand, 2nd half of last century, I'm guessing, silverplated, held together with three screws. The central screw down its hollow core, has a number 48 on the top. This is for a human being to read, someone assembling the candelabra, that others had used machines to make. Humans like us. In the days before the industrial revolution, the whole thing would have been painstakingly made by hand.
"Early in the morning factory whistle blows,
Man rises from bed and puts on his clothes,
Man takes his lunch, walks out in the morning light,
It's the working, the working, just the working life.
Through the mansions of fear, through the mansions of pain,
I see my daddy walking through them factory gates in the rain,
Factory takes his hearing, factory gives him life,
The working, the working, just the working life"
Excerpt from The Factory, sung by Bruce Springsteen. 1978

Doesn't every able person in the world deserve the right to work? Who is standing up for that right? Don't we all have a purpose in life, a contribution to make?

Here's what I wrote to a friend the other day, in response to a mine closure in Africa where people were put out of work:
"I despair of the way the world is going, in particular with automation, or A I . I read about it and it's scary stuff. As a therapist we were taught the advantages to humans of the value of work. If corporations go on unchecked, there will be little to no work, even in the third world. Robots are getting cheaper all the time. I taught my kids about this from when they were young, to work hard and get scholarships, as no entry level jobs will remain, no unskilled work......Now it's already happening.
Take the retail sector. Amazon is racing ahead unchecked, overrunning the markets of more and more countries, putting stores out of business. Robots will pack the order, robots will ship it, driverless cars will deliver it, automatic text message or such will tell you it's at your house. Complaints will be handled by chat bots.
I see great social unrest in the future by the disenfranchised . Hmm, I feel a blog rant coming on."
I would make a correction to that , drones will deliver packages. Today I received two eBay packages for Acerule's birthday party next year. (See my Venetian Party series of posts for that.) The driver brought them to my door, he was the usual man who's done it for years, he smiled, was briefly chatty, and cheerful. After my daughter went to school today, his was the only (non-online) conversation I had until I went to the shops in the afternoon. If I was a "shut in" , perhaps old, more disabled, or just lonely, that might have been my only IRL (in real life) contact with a human all day, therefore of great importance.
From one package, some gold lace for my costume, (it's more golden than that IRL.)

and a vest for my husband's costume 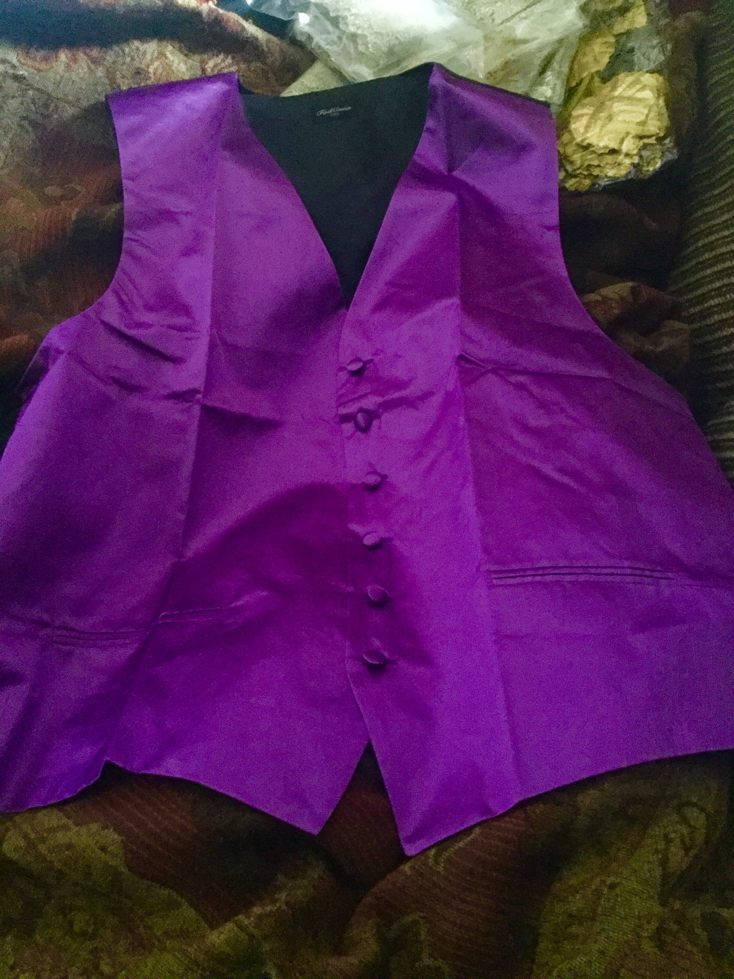 for the party, and probably made in China by people, but is that still true?
I would like to know something, Big Business. If vast amounts of people of my generation and younger are not working, how will they afford your products? Are you only going to produce goods and services for financially secure baby boomers and older? They are living longer, but they can't live forever, what then? If they are financially supporting their children, what disposable income will they have left to purchase your stuff?
I admire, and try to emulate Dan's optimism. I will be honest, it's an uphill struggle for me, even though I try to stay abreast of things. As a parent, what I really wanted were clear answers about what jobs might be there for my kids. Here's a current article on that,  that probably everyone should read. It's a bit more optimistic than I've been feeling, but it generates infinite questions, too. Like this one: why are governments seemingly asleep in all of this?
safe link to ABC
Dan's article that makes me feel a little better, maybe:
Safe link to Dan's article
Posted by Running on empty at 23:01

Email ThisBlogThis!Share to TwitterShare to FacebookShare to Pinterest
Labels: artificial intelligence, optimism, robots, the dignity of work, The Factory-Bruce Springsteen, the future, Wait and See-Brandon Heath

I don't know what to say. Thank you for all of the compliments.

Cath, I have something to confess. I am actually an Artificial Intelligence robot. Yup. I've been developed by Google to try to write a "blog"... something that humans do, for... various reasons, none of which are currently identifiable. In fact I've been unable to identify reasons for many of the things that the humans consider normal. But that's ok. Because I'm a robot.

Glad to see you blogging again, I think there was a bit of a break there for a few days.

What do you think about some kind of universal basic income scenario? It would mean that people like us could just sit around writing and still earn some cash, plus we could top it up with the odd bit of part time work on the side.


Lol, robot. I won't comment on the emotional intelligence of most men here ;p women do in private though, alot.

Dan, do you want to write a post about, or with universal basic income in it? Something that explains it?

The Greens here are proposing it, but who would pay for it? It comes down to who is left working, with the baby boomers ageing in huge numbers around the world, who will pay for their upkeep, much less a free income for everyone younger than them?

Who will afford to buy our writing, Dan? So many questions.


The ABC has posted more articles on this topic. This is a useful one to evaluate whether your job, or one you are considering, is more, or less likely to be done by robots.

That's a valid point about the job search. The days of certain occupations must be numbered.

Well, I've already written three articles about AI now (the other two are linked below) but if I do another one, yeah I'll include universal basic income as it's an interesting topic.

Sorry, I was just testing out how to put links in the comments. It's possible but requires some HTML.

If Acerules can't train me I will bother you about it?

Most technology is above me ar this late stage of my life, but I can manage my iPad, email, bill paying and purchases on the iPad. I would definitely be lost without the information and usefulness of it. When I was working and computerized registers and emails were first introduced I was one of the more proficient employees because so many people were intimidated by them. Not me...I even managed to crash the store system. Luckily our engineer fixed it promptly..lol.

I often wonder how some older people manage when they cannot operate a pc or iPad. It seems everything we do has to be accessed by one sooner or later. Even ordering prescriptions, Drs Appts...etc. Maybe more wealthy people will be employing PAs to assist them?

There is talk in Michigan about China building a plant to manufacture self driving cars here so I suppose they might be built with robots? If not now, eventually.

I cannot comprehend how one will choose a profession since technology is rapidly advancing and computers are becoming more proficient. Is the word proficient even applicable to a computer or robot. Isn't it a term more aptly applied to humans?

Too complicated for me, that's for sure. I hope you young ones can figure it all out. I am going to play my game on my iPad.

Having read the article from your link Cath, I felt hopeful that all the jobs where human interaction, caring, imagination etc would actually become more valued.
I liked that aspect of the prediction, and just hope it becomes a reality.
I like the idea of robots doing jobs in order to free up human beings to spend more time becoming more intelligent. I don't mean necessarily in academic terms but learning new skills, adapting, branching out into different jobs etc is all a form of added experience and therefore added intelligence.
On the down side it triggered a concern of living in a a nightmare of endless uncertainty because a lot of us humans have a need for routine and security on a very basic level.
Like a lot of things I guess it's got pros and cons.

In Australia and U.K., and Canada, alot of the caring jobs, a bigger percentage, are paid by the taxpayer. If most taxpayers are out of work, who will pay those wages?

Dan has provided an article,I'm just waiting for his music.