This is part 8 of the series I'm writing in the lead up to our daughter's sweet 16 Venetian Masquerade baroque ball early next year. Please read the other seven parts.
So, I have been very busy, and broke, with Acerules' party preparations lately. Have been ordering and receiving packages of craft and other materials to start, or complete various projects for the ball.
After alot of research on costs, I settled on making the napkin rings from either curtain, or keyrings, and glueing on fancy buttons, preferably recycled,( to help the environment, and my budget.)
A new eBay friend in Queensland is going through her stash of fancy silvery and goldy buttons, for my idea. She is at the top end of Australia, nearly, and I'm towards the bottom. I enjoy when she calls to chat. She has already sold me  laces and trims for the costumes and masks. 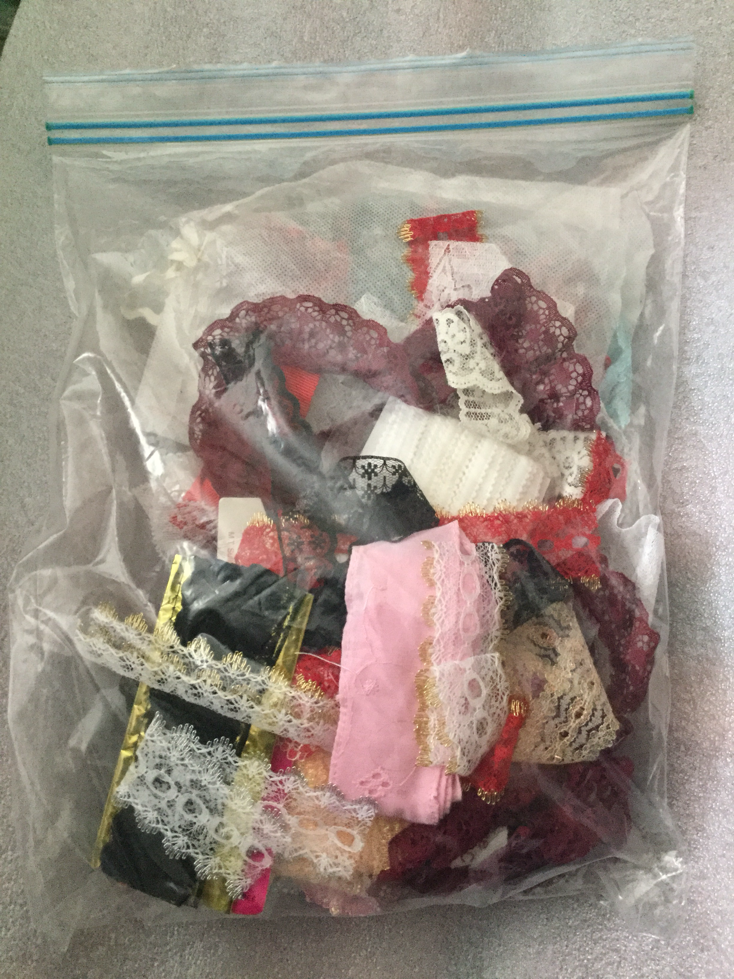 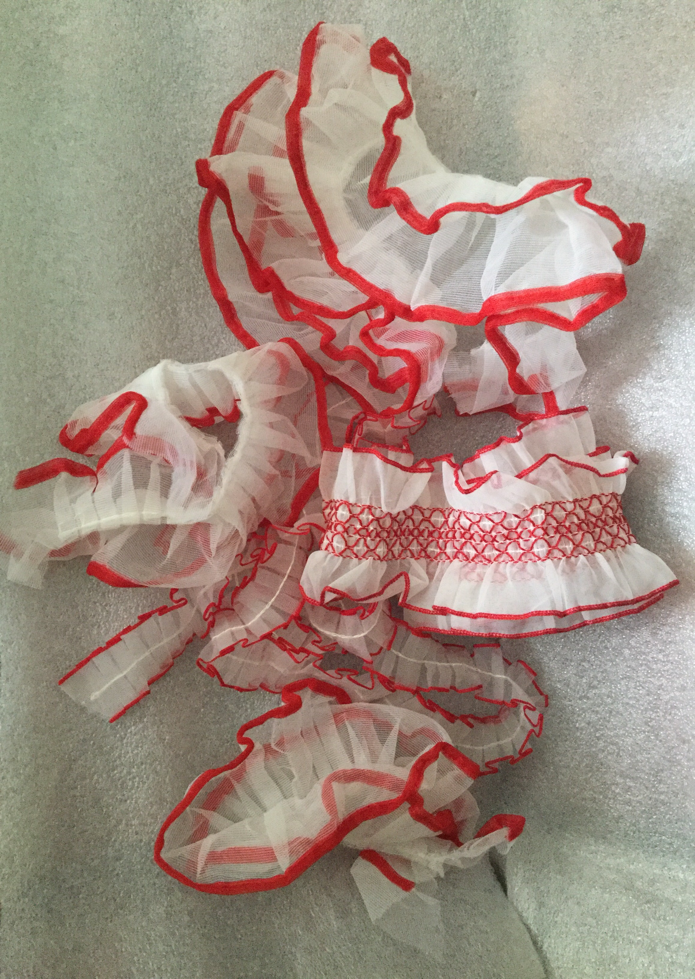 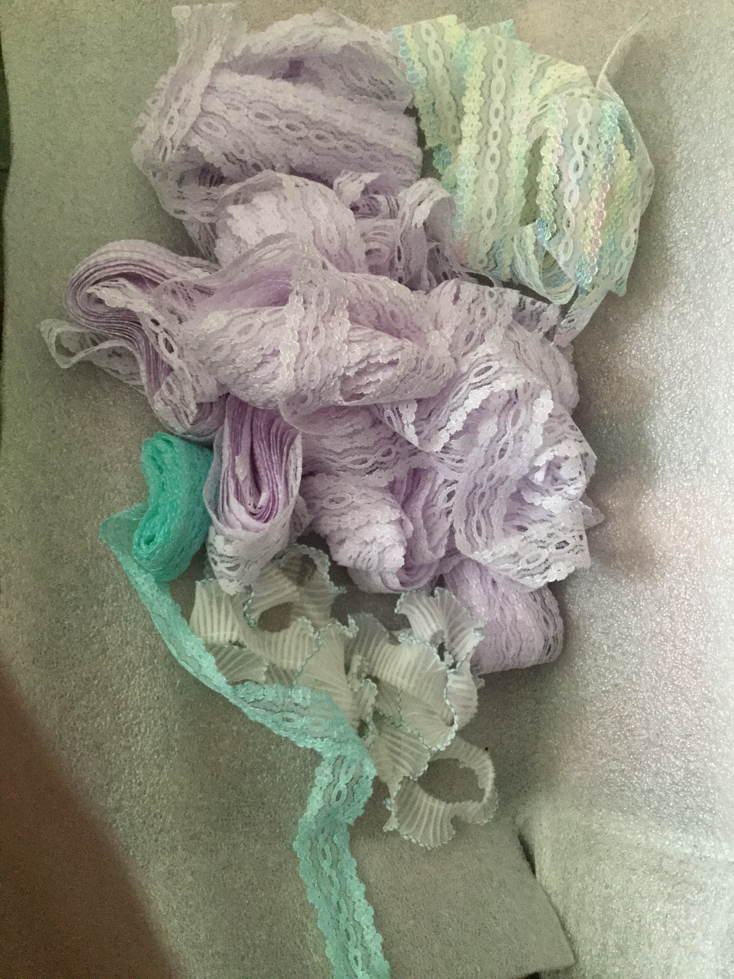 She sold me a vintage mannequin head, so I can give the cheap black and brown ladies wigs I bought , a 1600-1700s updo.
Does she look a bit Italian (still in her hair net.) she likes to answer the front door sometimes, lol. 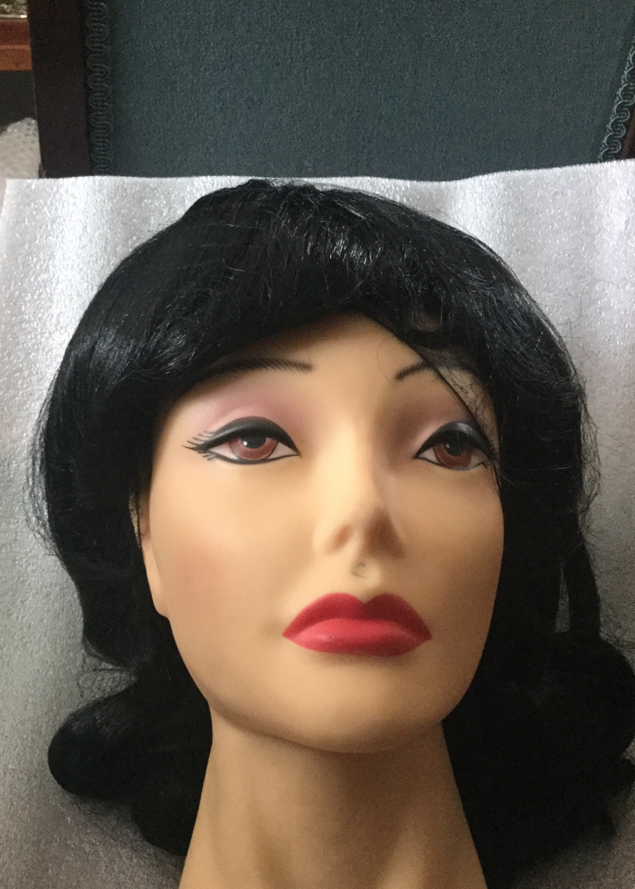 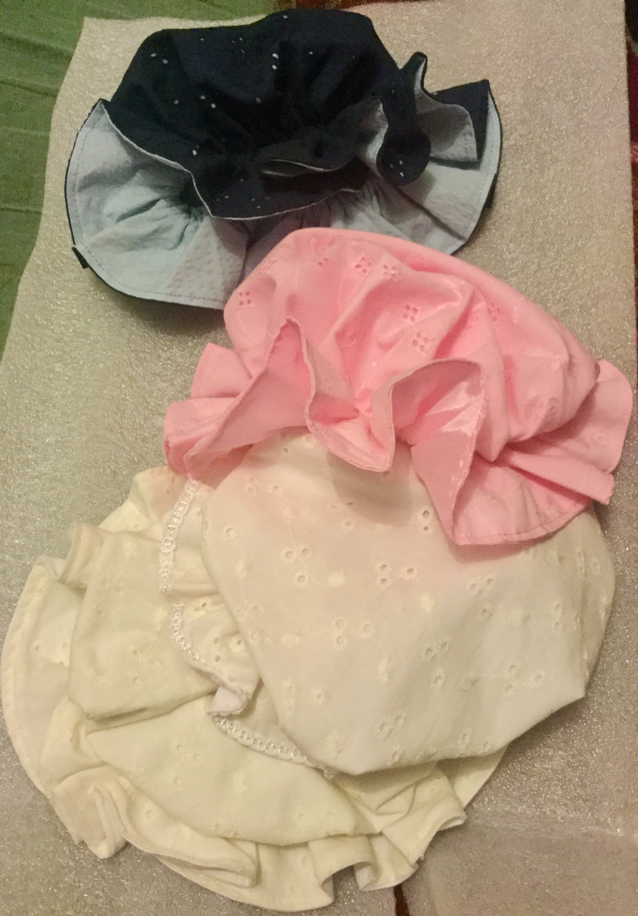 Another idea I've been researching, are flower wheel chandeliers. I'd considered them before, rejected  the idea, and now I'm back to it, to solve a problem.  This party theme is mostly set in the 1600-1800 time period, in Venice,  but the two big lights already in the dining room are 1970s etched glass drum pendants. So I'm revisiting the flower chandelier idea to hide them.
As such, I got my hubby to strip out the spokes from two discarded bike wheels today. The rims look good. Am thinking I might even do two more and completely hide the lights. There's a Council junk collection in October usually, and bike wheels amongst other unwanted hard rubbish , get thrown on nature strips around town (the grassy strip between the footpath and the road. )
The ceiling is high, as it's an historic building, but I'm not sure yet if the lights are tall enough to warrant double or single tier chandeliers over them. If I do the former, I'd put a smaller one under a bigger one. I already collected alot of hot pink artificial flowers over the last three years for this ball. I've learned that if my florist gets the wrong flowers delivered to her then it's not the end of the world, we can supplement. Some of those roses and lilies with cream and black flowers and gold leaves will look lush and hide the light fixtures, or at least upstage them. I've been looking for the best candleholders to attach to the tops of the bike wheel rims. Did find some hot pink ones for $1.00 au each, today, sounds good to me. I'd like to paint some kind of baroque stencil on them though.
Acerules and I have been figuring out how to turn some of those artificial flowers into party LED light strings, as the pre- manufactured ones are $30 each. I bought one cheap set of plain battery LED  fairy  lights to experiment attaching  the flower heads to. The idea was to hide them among the real flowers in the large flower arrangements, and hang them over the wisteria cane arch. Then after dark, which will be after 8 pm that time of year, switch on all the battery candles and led fairy lights, with the overhead electrical lights off. The flower arrangements will softly glow. Much as I'd like to have real candles only, we are worried about a goofy teen accidentally burning the historic hotel down. The flashing disco lights in the dance room won't be historically accurate either, though I'm sure Vivaldi and Mozart would have danced to them if they were available back then.
5.35 mins. Extended dance mix, so dance!

I kept the long canes from my last wisteria pruning, to give to a friend who was planning a "rustic Turkish " wedding. She changed her mind, so I decided to use them at our party. I said to Acerules, I'm thinking of making an archway from those canes. She said"Do you want me to enter through it?" That sounds like a good photo opportunity, her in her ballgown.
Three strings of pink plastic rose LED lights came during the week. They are solar so I have to remember to charge them all up beforehand. 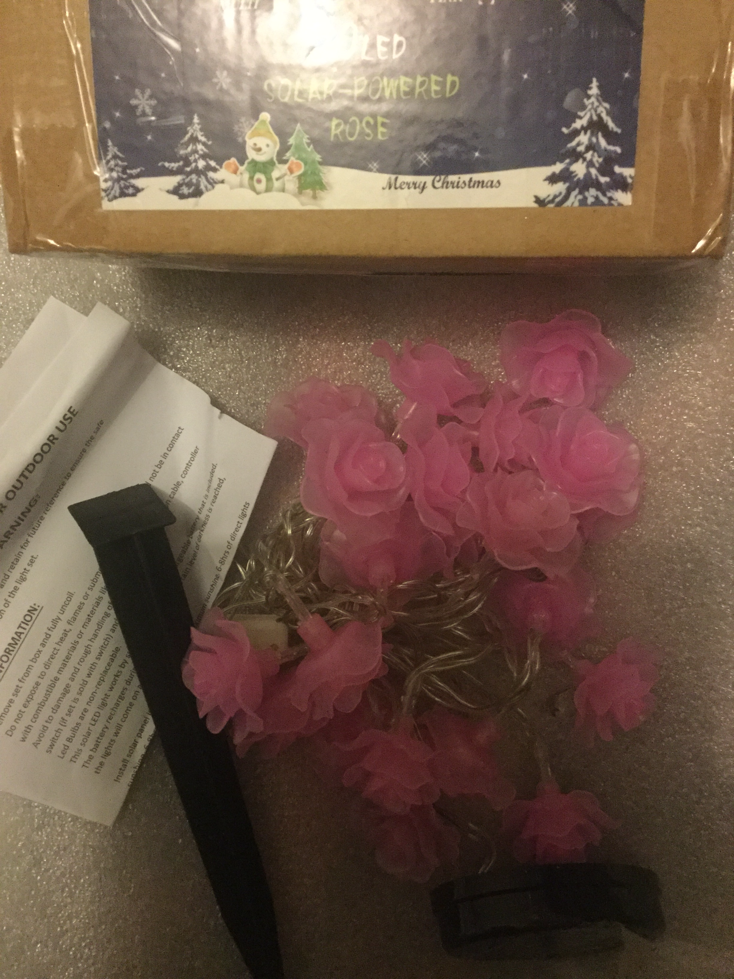 I was going to use them in the dance room, but I think they have solved another problem I'd been trying to fix for months. You see, Venice makes beautiful chandeliers in Murano. Way, way out of my pricerange, I'm talking thousands, so I bought two cheap 1970s crystal Marie Therese ones instead in Melbourne, months ago, through eBay, as you read in my earlier post about that. Well I'm working on simulating Murano chandeliers with those, by taking off the faceted crystals and adding more flowing , smooth, glasswork.
Then I had a weight problem. I have to attach them to the ceiling without putting a hole in it. So I was on the lookout for glasslike acrylic flowers. In this country they were very hard to find, until these opaque pink plastic flowers arrived on the led lights . Acerules said, "we can just use a few, take them off here and there, no one will notice , and put them on the chandeliers". I've also been collecting lots of different hot pink and colourless smooth glass beads that will replace the strings of faceted crystal beads. A sample: 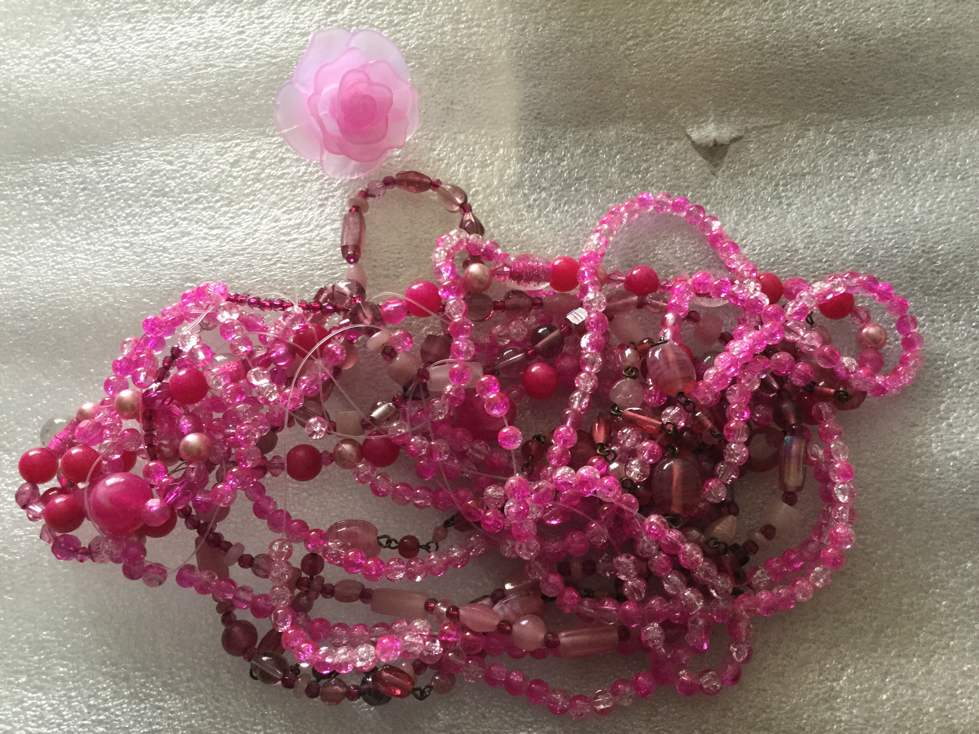 As I don't have the budget for an electrician to wire them up, (it's the law in this country, no electrical DIY, ) I'm just going to replace their bulbs with battery candles.
Acerules' Cinderella shoes came during the week from eBay. They are brand new, in a box, reduced from $120 au to $27. Completely covered in diamentes. 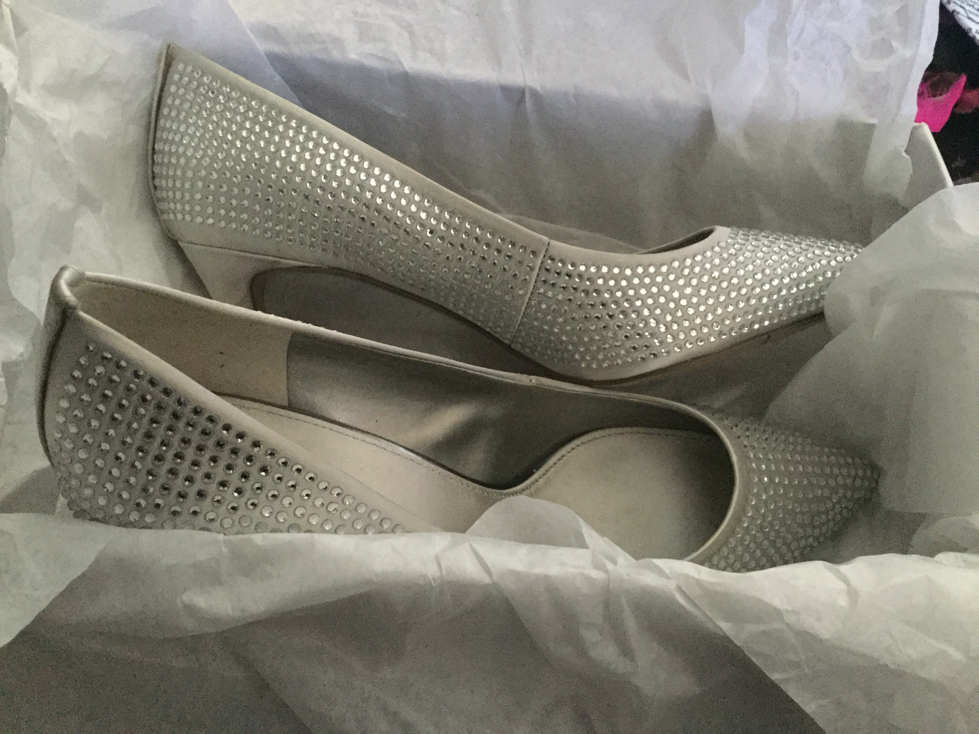  
That's all well and good, but if her feet grow any more, they will be too tight and I'm thinking if I stretch them the decorations might pop off. She does have back up shoes so we shall see. When she had the first fitting of the gown it was too long. Her father was adamant that she would grow enough.
The skirt is too ornate to take up successfully, but we can always raise it up with a hooped petticoat if necessary. Im trying to avoid that though, as Ace wanted to dance, and I want that for her too, so the lady has attached cords underneath for her to raise up the front of the gown. Then I found a short "Goth" black iron hoop that Ace fell in love with. It does look good. Eventually I talked her out of it though, because she wouldn't be able to sit down for 6 hours, the duration, or go to the toilet!!
Some other random things for the party, below:
---------------------------------------------------------
Murano glass vase, a precious piece. She will be able to have it in her adult home later. 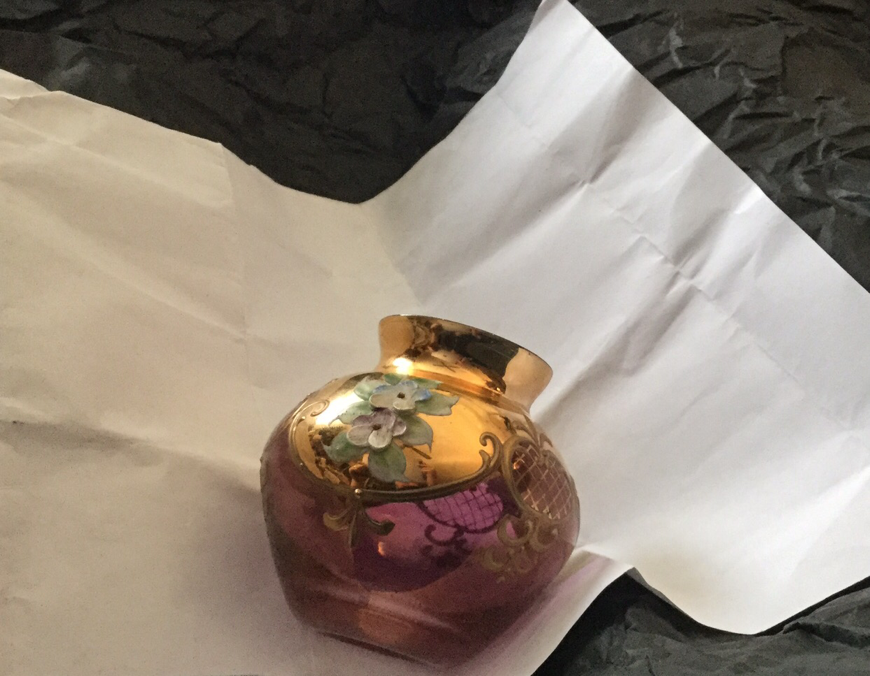 Bags for Italian chocolates, transparent in the middle. 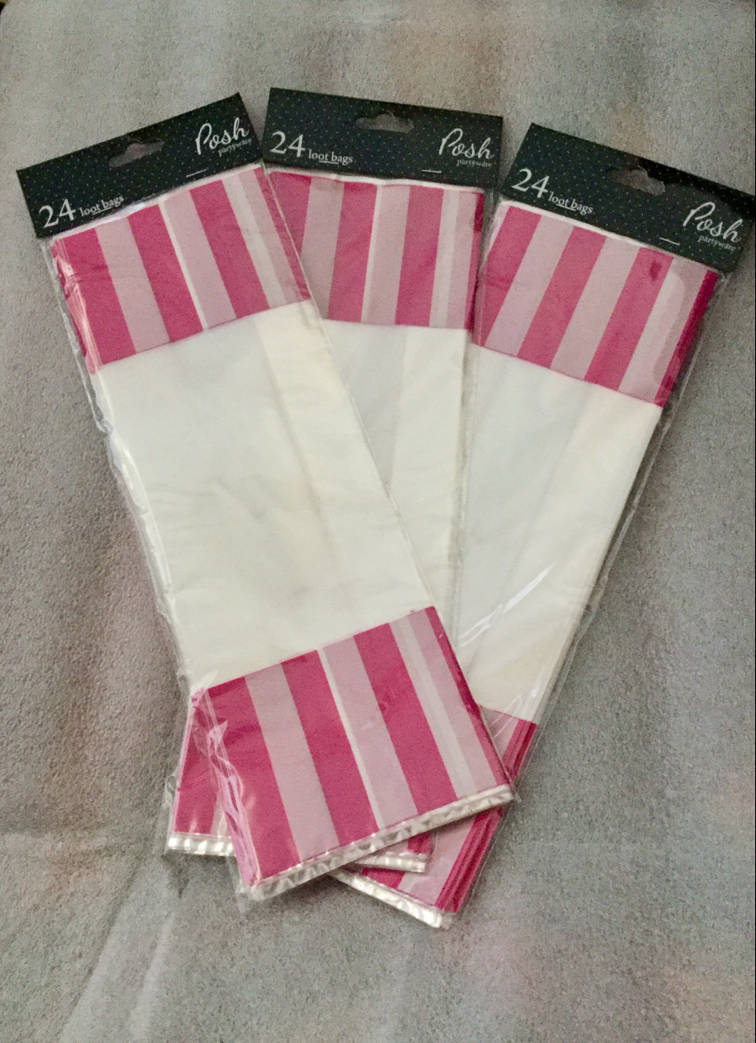 Vintage Italian silk pictures for the walls. The top one is quite large. 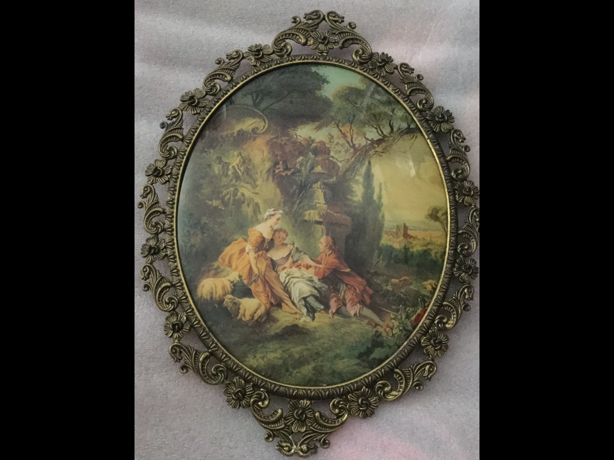 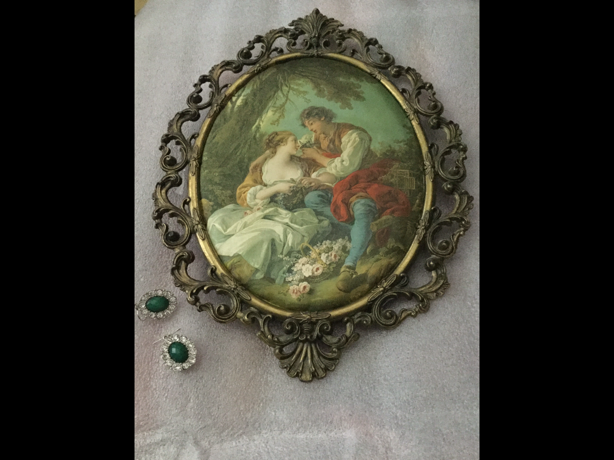 Pink berries that light up, well they are pink when off. For the flower arrangements or arch, whichever is closest to an electrical outlet. 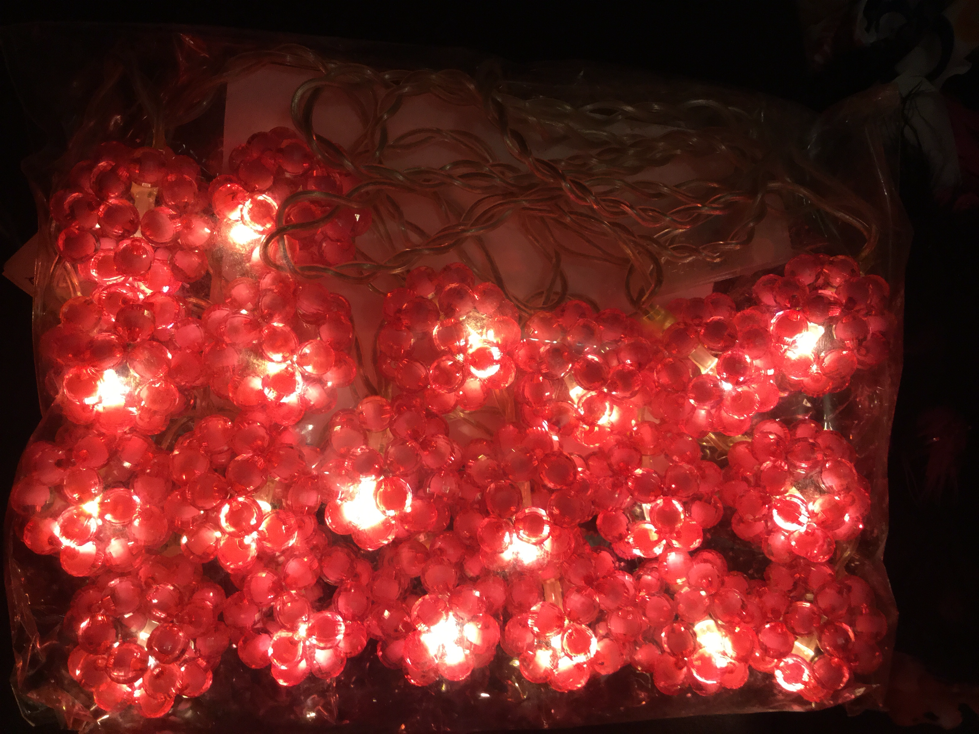 Decorations for the masks, a sample. There are also flat backed cabochon "jewels", lace, ribbons, etc. 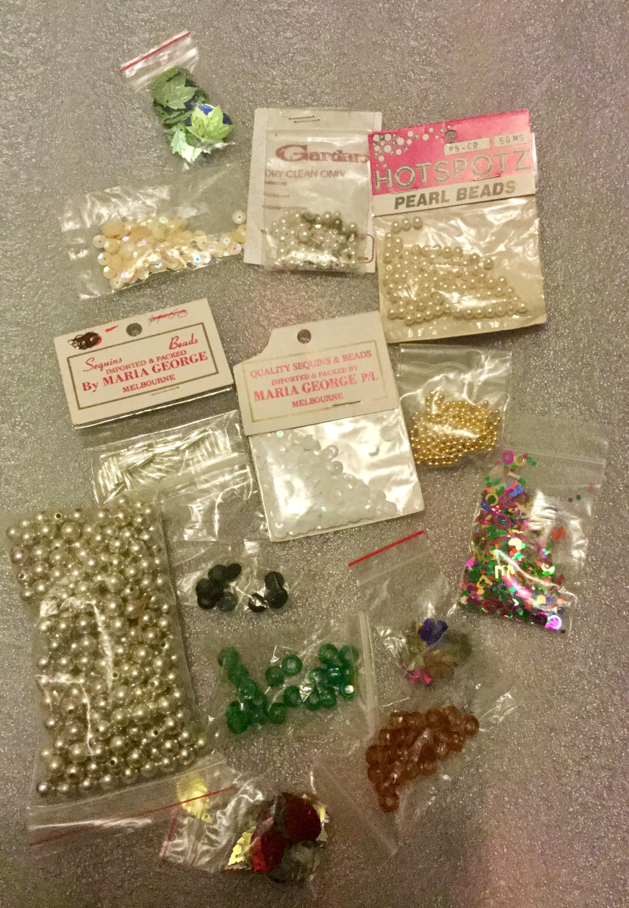 A sample of the vintage jewellery giveaways for girls. I kept telling Acerules she should wear a cameo, as they were very popular in that period, but she didn't like any of the previous ones I found. She's almost sold on the  black ones below, though. Her outfit is not historically accurate , it is more inspired by the period, with a modern wildness to it. She also doesn't want to wear pearls. I have a collection of faux ones for guest costumes as they were very popular in that 200 year period. 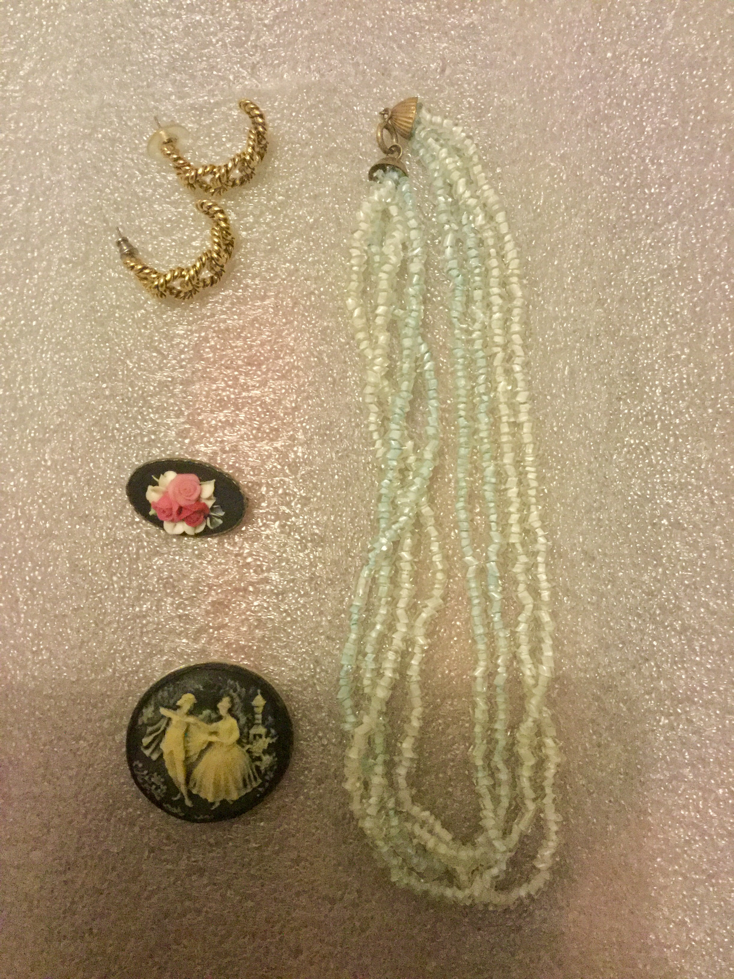 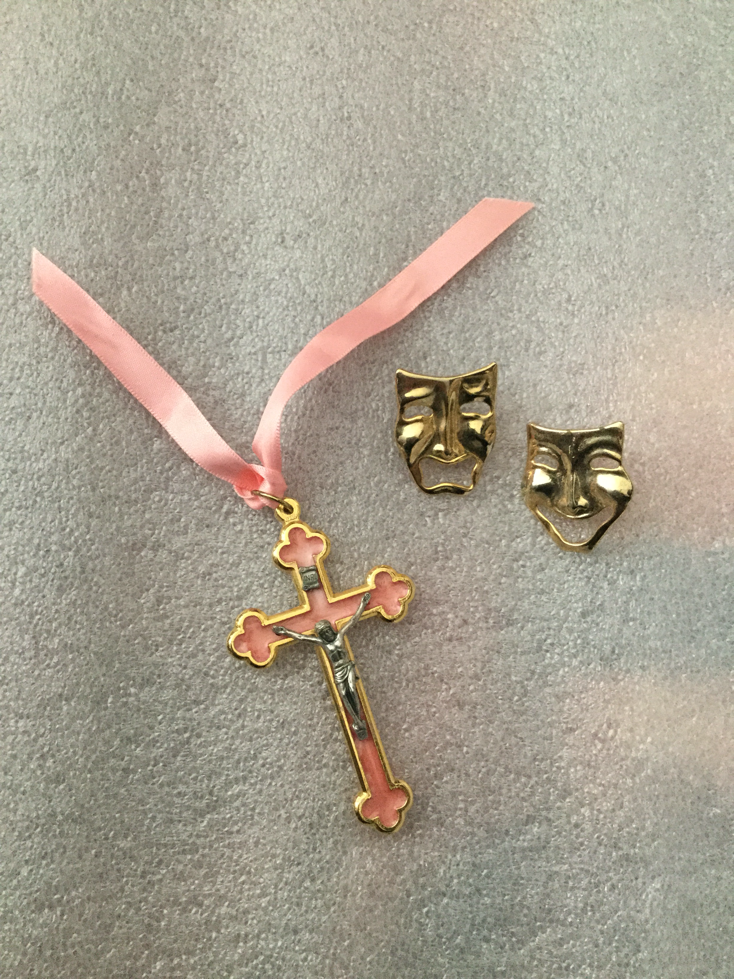 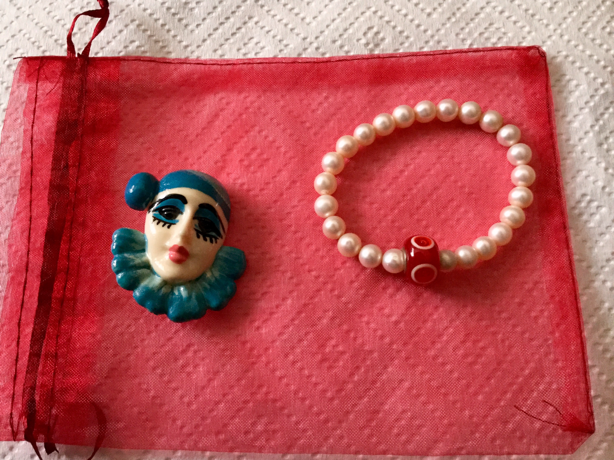 A feather pen for the guest book can be used again for her wedding if it still works. Black narrow ribbon for small table flower arrangements etc. 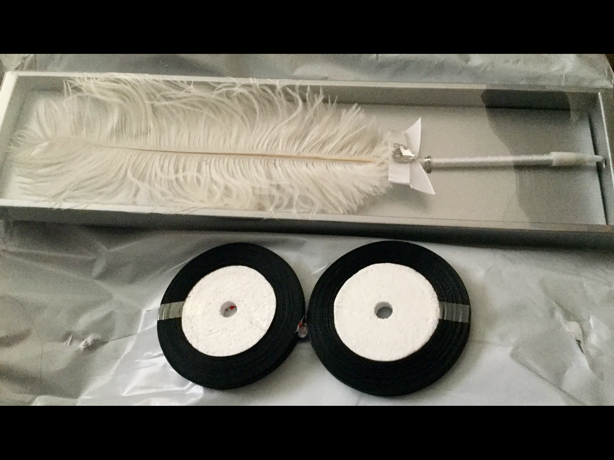 Mop caps for costumes made by the Queensland lady, below. Ace will be wearing a mini black top hat off to the side. It has a black rose , bow and feather. She is mixing Goth/steampunk touches with her Cinderella look. As she has always been a mix of tomboy and princess, that's quite appropriate. I remember when as a preschooler,  she would sit out in the garden in a pretty dress playing with slugs.
Italian brass dish, below, probably for the wall. Things are arriving here from around the country, as Italians downsize, I'm guessing. I look for thecheaper prices. Afterwards I want to have a garage sale. Usually after my theme parties I feel sick of the theme. The preparation for each one always takes a minimum of 12 months, this time three years! Acerules can keep things she wants for her adult house and I have my eye on a piece or three, then the rest must go. The exception is anything that can be used for her wedding. She says she wants a medieval theme, so I'm selling the baroque things. She doesn't want a big 21 st party, just to go out to dinner with her friends. Some kids from Australia like to travel overseas for their 21 st. 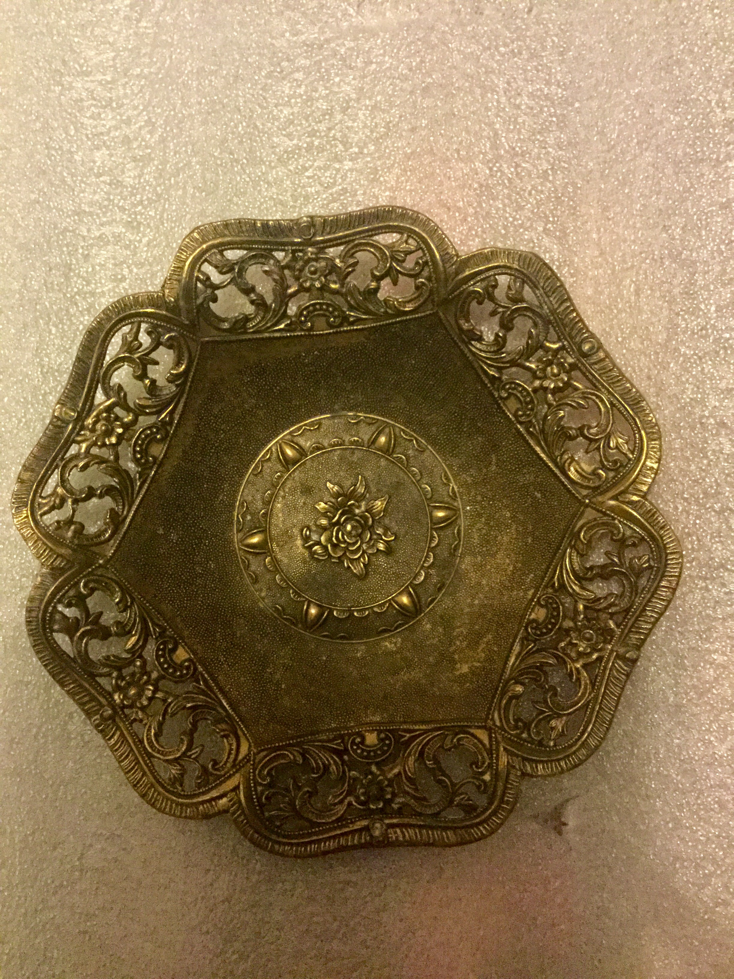 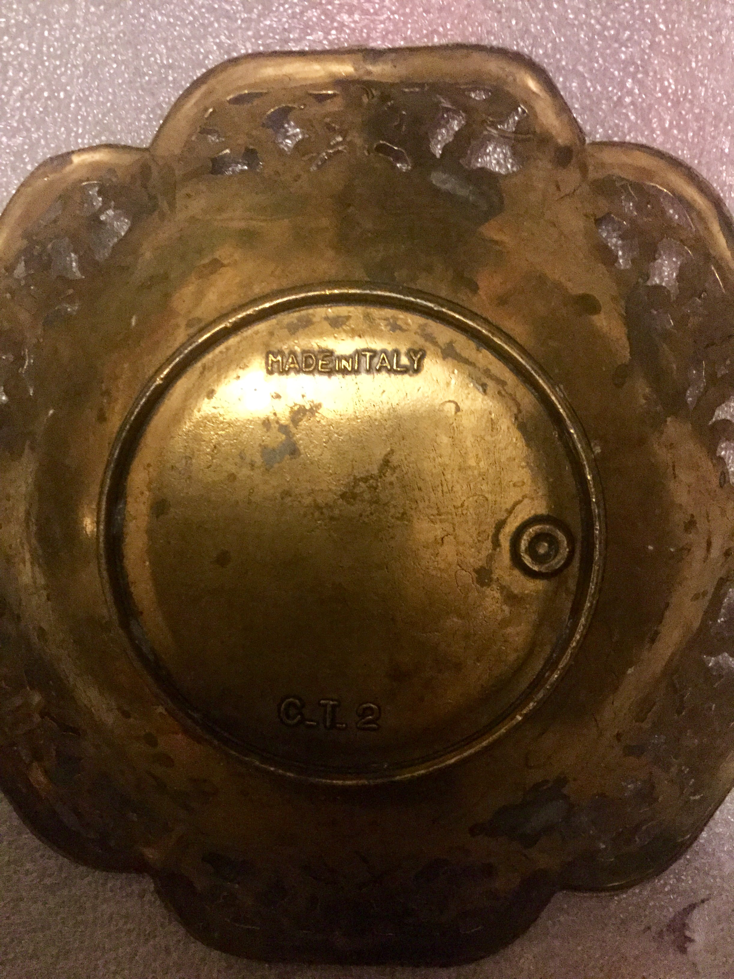 Another sample of the large stash of vintage jewellery for guest gifts for the girls. 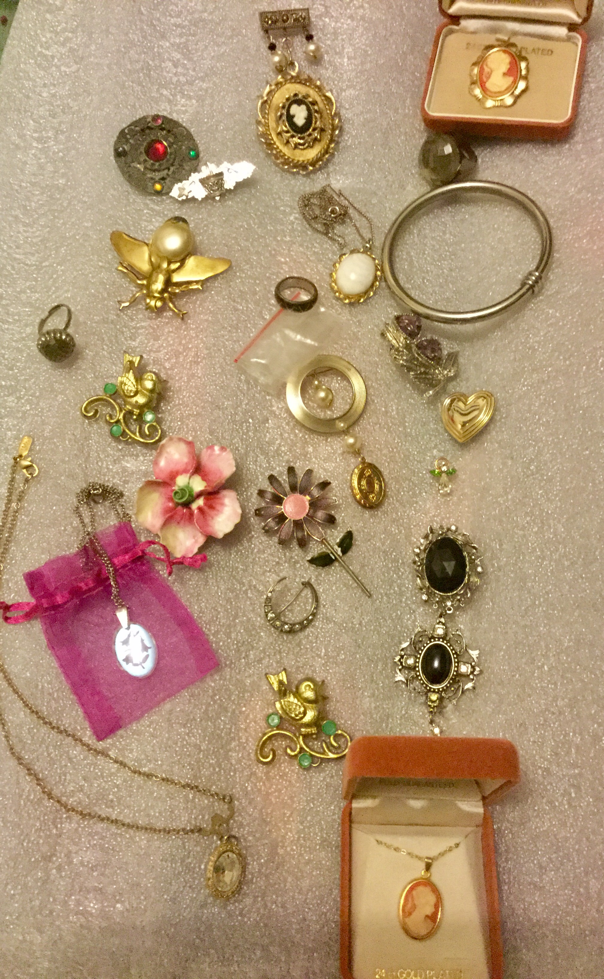 Ceramic wall masks that I will give a makeover to suit our colours. 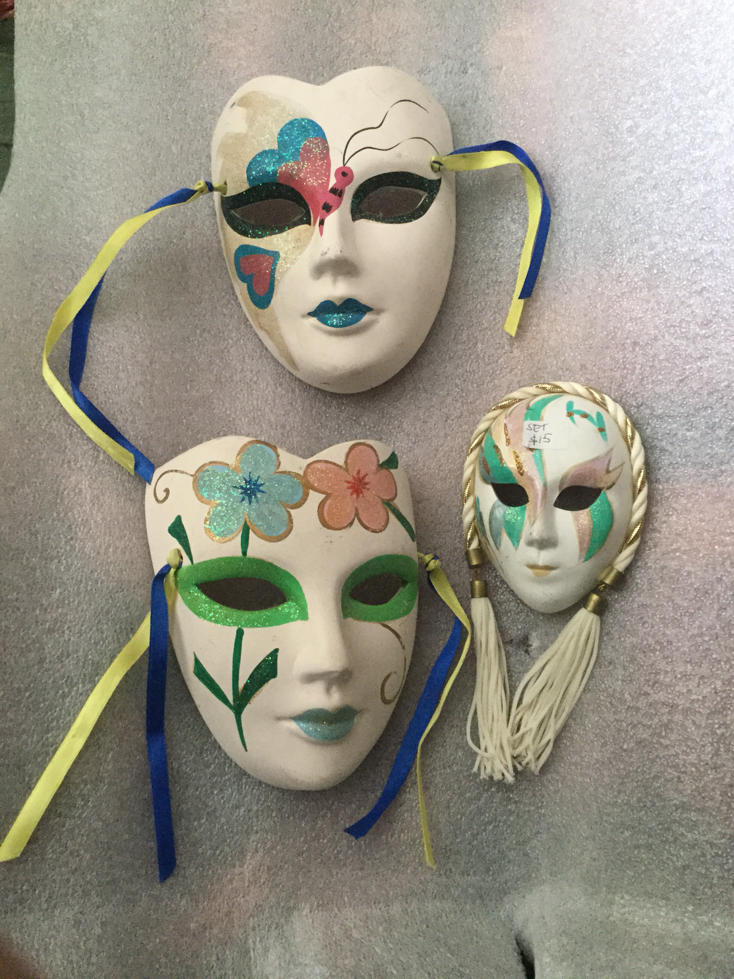 There is always one where you think "You had one job."  Accompanying the following item, there was an invoice for what I actually ordered, which was straws with pink stripes. I've been collecting those for three years and exhausted the local supply. I explained I didn't want spots. They are sending the right ones. I could understand colourblindness, but.... 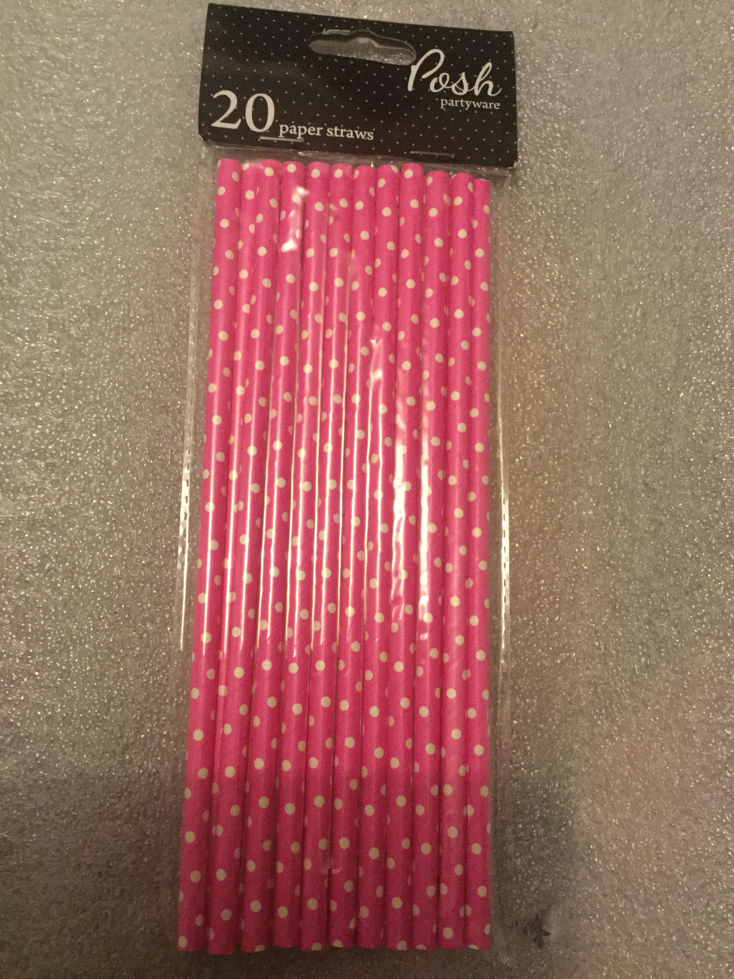 Still hard at it then.

Just to let you know I tried to email you but I don't think they're getting through as nothing shows in my sent box. They no longer seem to working locally either. Also don't seem to be receiving any, although got a random one from the BBC this afternoon. No idea what's happened?

I got four from you. Tell your provider I sent you three today.

I don't know how you juggle everything you are preparing for the party. A lot of work! I doubt you have left anything to chance and have every detail nailed down. It is looking like it will be very nice.

I know it's probably difficult to visualise, just think over the top.

The Queensland lady has found suitable buttons for the napkin rings, I might need a few more but not many. Have decided to have them detachable.

I was thinking the same thing as KEthical Politics. When it comes to getting the room set up, it must take hours to get everything in place and you'd need to make sure there were enough people on hand to help etc. Very impressive.

Have you had much feedback from the client? :)

Yep, bump in and out is going to take a day each way. I have two paid people to help with setting up the room, including one young and fit enough to get up the ladder. It's still going to take a long time as I have to put up temporary hooks, working out where to put them will take awhile.

I've learned over the years to have everything I can do in advance, done.

Even being used to my parties, as she is, she's amazed. She's telling me if she likes something or not, and will be helping me with some crafts for it in the holidays.

That's after she photoshops Margo in a picture with Donald Trump.