Continuing our two part series by Fizzfan from England , polite comments in the section at the bottom are welcome.

At the end of the war there were unsavoury validated reports of Iraqi soldiers being buried alive by bulldozers as they remained in their trenches, and the bombing of thousands of soldiers as they withdrew from Kuwait City (albeit official surrender had not been verified at that time) on what became known as the Highway of Death. The U.S. had also called for uprisings in the Shia south and Kurdish north and then just left them to Saddam’s revenge.

Iraq never fully recovered from the devastation as they were then crushed for 12 years under U.N. sanctions.   Ambassador Madeleine Albright admitted this contributed to the deaths of half a million Iraqi children.

To give that some perspective, that's more than the combined death toll of both Hiroshima and Nagasaki.

But never mind because she said it was WORTH IT.

I'M NOT SURE THEY WOULD ENTIRELY AGREE. MOVING TO THIS CENTURY & THOSE PESKY INVISIBLE WEAPONS OF MASS DESTRUCTION?

David Kelly was employed by the British M.O.D and a U.N. weapons inspector in Iraq. He was due to appear before the Parliamentary Foreign Affairs Committee to expose there were no weapons of mass destruction but decided to kill himself two days beforehand by cutting an artery?.......

Unperturbed by having no actual proof of these WMDs, the U.S. and Britain invaded IRAQ just in case they did and were thinking about sharing them with their new best enemies Al Qaeda.

Hundreds of thousands of people were killed and it pretty much destroyed Iraq. Afterwards it unleashed a civil war and GAVE RISE TO THE TERROR GROUP The Islamic State in Iraq, which later merged with terrorists in Syria to become ISIS.

ISIS! NOTHING TO DO WITH US THOUGH?

Iraqi Deaths somewhere between 1 and 2 MILLION (difficult to get any accurate figures) Occupying Forces below 5,000.

Another legacy left behind when the troops left Iraq is that birth defects soared due to the use of DEPLETED URANIUM in our weapons.

It's also a good time to ask a thus far avoided question. How do these people feel? 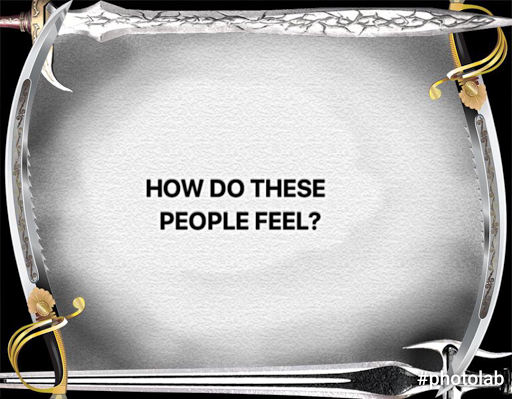 These are a random selection of widespread comments from the general public:-

“All the Western world wants out of the Middle East is oil, and nothing the West says about democracy and freedom is genuine. If it were, the West wouldn't have supported regimes that oppressed us, like Qaddafi in Libya, and Mubarak in Egypt. They are hypocrites. We cannot trust them at all.”

“They” do not have an interest in helping us build factories, roads and schools. All “they” care about is taking “our” natural resources at any cost before leaving the country".

"America held out hope to all, came to Iraq, promised it liberation and prosperity, and ended up destroying the country."

IF THATS THE GENERAL PUBLICS VIEW, IT DOESN'T TAKE MUCH IMAGINATION TO RAMP THAT UP TO A MORE RADICAL REACTION AND A TERRORIST IS SPAWNED.

These youth will grow into young men and they may well have issues over what happened to them. 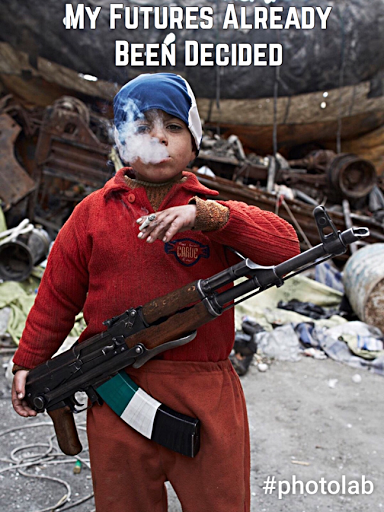 AND THEN THERE'S THE QUESTION OF WHY WE TAKE THE SIDES WE DO?

WHY DOES THE U.S. HATE IRAN?

(This was written by Jeff Faux a renowned economic American Author)

WHAT DO I THINK?

This really is just a snapshot of over 100 years of 'interventions' from the West.

It only scratches the surface but for a long time now I've asked these recurring questions:-

Why do we keep sticking our noses in? Has any of it actually helped? Will it ever help? And the cost!? (Apparently Trillions)

Nothing seems to improve, in fact it seems to get worse.

Are we containing a problem or just making it even worse?

I don't think any occupation or intervention in someone else's territory is likely to leave the people living there without scars and grudges. Keep doing it and those grudges will unquestionably gather conviction.

I don't condone terrorism or indeed any violence AT ALL, but that is not the same as saying I don't understand how years of foreigners occupying their lands after carving it up without regard for the citizens, then destroying their homes and the devastation of witnessing the wholesale killings of their loved ones and also imposing sanctions that crucify them afterwards, would not eventually breed hardened feelings of absolute hatred in some.

AND FINALLY AND VERY IMPORTANTLY when you add to that their very strict religious indoctrination that is largely at odds with our own lifestyles and beliefs, you definitely have a recipe for some seeking hideous and glorifying forms of revenge.

There have been 85 'conflicts' in the Middle East since the demise of the Ottoman Empire 100 years ago. The West have NOT been involved in the vast majority but unhappily the statistics reveal they have been involved in the deaths of as many as all the other conflicts put together, and through sanctions even more.

The BIG question of course is what our motives really are?

Is it humanitarian, oil and resources, combating terrorism, or just control and dominance?

I think it started off as control and dominance, that quickly became the oil and resources and the humanitarianism aspect was invented to give us a reason to protect the other two at any price. The terrorism is just an end product we're stuck with.

Swallowing the mantra from George W Bush’s of "They hate us for our freedoms”, is absolute garbage and much more to do with the fact that we are FOREIGN INVADERS supporting whichever regime seems to be advantageous to US thus giving them an unfair advantage. THE OPPOSING SIDE WILL NEVER FAIL TO BE ENRAGED BY THAT.

The end result is that THE WEST have given the fanatics fantastic leverage to glorify their causes even more and not surprisingly spawned a rising tide in Terrorism against us.

HAVE OUR INTERVENTIONS WORKED AND LEFT THE COUNTRIES BETTER OFF?

LIBYA:- Got rid of Colonel Gaddafi. They're now in the midst of a brutal civil war with no end in sight.

IRAN:- Iran and Iraq had an 8 year war and it was common knowledge The U.S. provided arms. Nearly 40 years later we've only just brokered a rather tenuous deal with Iran by lifting crippling sanctions in exchange for them restricting their nuclear programme. We've yet to see how that works out because Iranian hardliners aren't happy about the deal.

IRAQ:- Got rid of Saddam Hussein with his Invisible Weapons of Mass Destruction.

Now Mosul their 2nd largest city is under siege by ISIS and 1 million people have been displaced and thousands killed.

Of the regimes and leaders that have been toppled, it looks like they've only been replaced by splinter groups that have made things even more unstable.

ISIS HAS FORMED AND ARE NOW A MAJOR PROBLEM.

To simplify things, I see the Middle East as a bit like Hydra, the multi headed monster. Trying to slay it is useless because it just grows even more heads. Leave it be and it might stop growing new heads like ISIS, or at least contain itself. Even if it doesn't, at least we won't be caught up in the blame game anymore, and maybe, just maybe, the rising tide of 'terrorism' against us would start to decline?

Of course I know this won't happen because we're in too deep to pull out, but scratching our heads and just demonising them as evil lunatics fighting a cause that we are wholly unaccountable for is something I now question and view rather differently. There are always two sides to a story (and this is a VERY complex one) I'd just never thought about the other side. 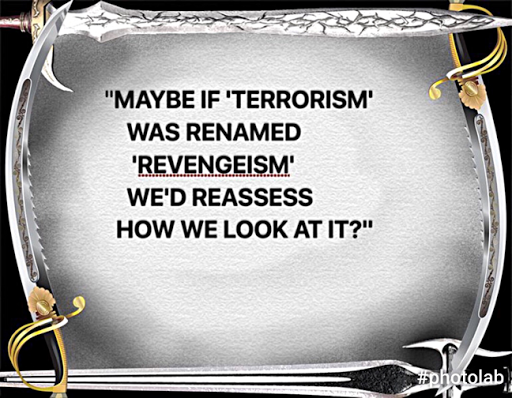 MAYBE IF 'TERRORISM' WAS RENAMED 'REVENGEISM' WE'D REASSESS HOW WE LOOK AT IT?

THIS SONG IS ABOUT THE IRISH TROUBLES THAT ARE NOW THANKFULLY OVER , BUT THE ANGUISH OF WAR I'M SURE IS PRETTY UNIVERSAL.

ITS CALLED RATHER APPROPRIATELY - ZOMBIE.


Certainly at this point I think ISIS need to be stopped. All war is terrible, but in order to have peace you must have law.

One of the things I heard over and over when younger was the fact the ME has been fighting their wars for thousands of years. IMHO it was a huge mistake by GWBush to invade Iraq after his father advised him not to intervene, there would not be an end. Well, now that Iraq has been devastated and millions of innocents slaughtered, are we better off? I would say NO. Now instead of praising Iran for electing a moderate leader Trump is demonizing Iran. I don't want to think about the ramifications...

So true KEthical. I can't help but think of the West as a bully sticking its nose into conflicts and mindsets that it is largely unable to really comprehend. Their history is vast and troubled and thinking that we can just 'sort it' is supremely arrogant.
They are a different culture and like you say they are forever at war fighting over territories and religious differences that are just too ingrained and complex to bomb into oblivion.
Isis is the latest demon but what was at the root of its emergence?
Sometimes arguaments are best left to the parties concerned because if you stick your nose in, the defeated will not forget it and just want revenge. It's a never ending cycle.