TALK ABOUT IT'S GENERATION


How many things did you use electricity for today? When it first came into use, people knew exactly. However, now we take it for granted so much, we don't even know, most of us, anyway, what we are running on it. Right now, the iPad I am typing on is plugged in. The heater is going in the room. When I was growing up, I was probably one of the few  children that were aware that electricity in Australia was mostly generated from coal. I knew, because when Dad was recovering from a major medical occurrence, we kids stayed in the Latrobe Valley with family friends. If you went out of town in any direction, you would pass a power station.

Here's one I passed through on the public bus the other day. 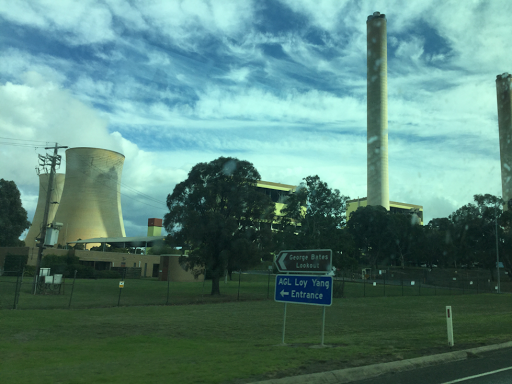 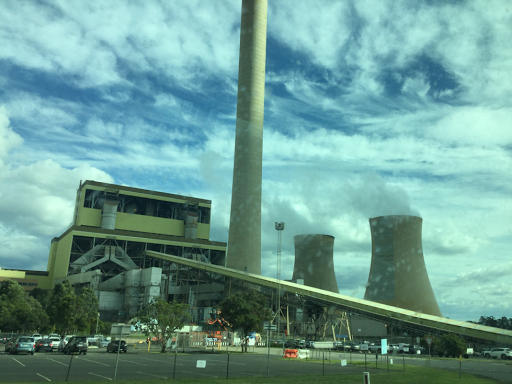 Coal mine can be seen in the distance in the shot below: 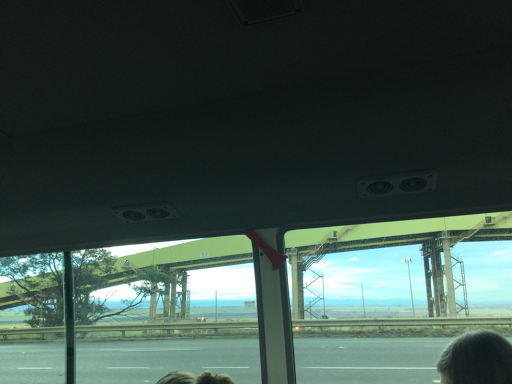 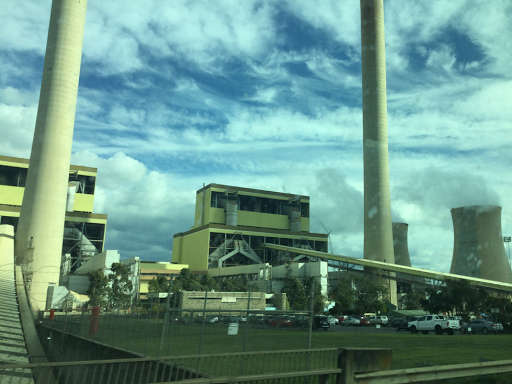 I was invited to a public meeting to discuss the future of the valley, where the primary industry for decades has been the generation of electricity by coal, and eventually the lifespans of the power plants are coming to an end. Scientists tell us that coal burned, adds carbon to the atmosphere, contributing to global warming. Recently, one of the power stations in the area , called Hazelwood, closed, making  alot of workers and other satellite contractors, redundant. Worksafe , a government body tasked with the safety of workers, had told the French company that owned the station, to bring it up to safety codes, as it was aged. A financial decision was made to close the station, and the coal mine instead. Conservation and Green groups celebrated. They have been pushing for renewable energy to be adopted everywhere instead of burning coal.

Greens Party MP Adam Bandt came to the Valley to talk about other industries that the valley could get involved with, plus agriculture, that has been there since European settlement. His point of view is that further closures of coal mines and power stations need to be foreseen, and planned for, to make sure there were jobs for the workers. He suggested the decomissioned coal pit and cooling ponds at Hazelwood could be used for pumped hydro power. He suggested that modular housing could be manufactured in the valley and transported and installed in Melbourne. He promoted solar and wind power. 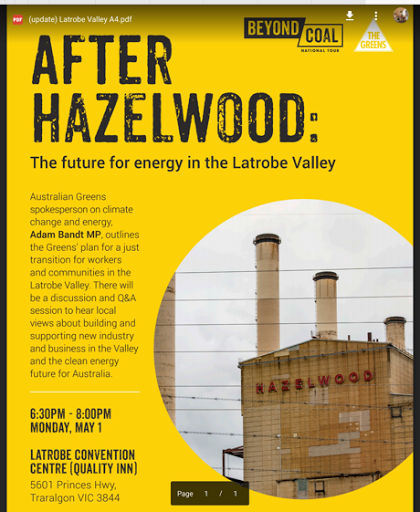 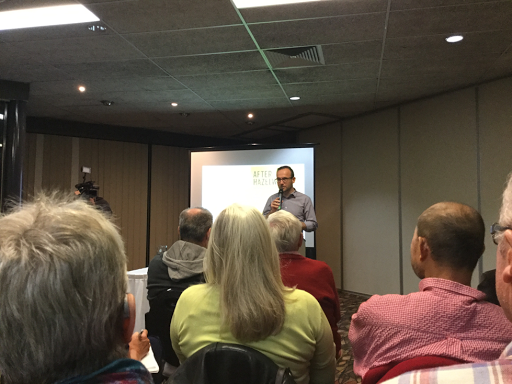 In the British  movie "Brassed Off" there is some trouble at a meeting where the mine is closing . There was no such trouble at this meeting. The microphone went around while people of all walks of life gave their opinions, many representing community groups. Mr Bandt wrote many of them down. He has been touring the power stations, and talking to other people. This is being termed a period of transition.

My daughter has arrived home and has boiled the electric kettle to make Cuppa Soup for herself, and decaf Nescafé for me. We all take electricity for granted. Tonight in bed she will read a book by the light in the ceiling.

Some of you might be readers of Dan already. Here he explains Global Warming in two minutes:

safe link to Dan Copping article
Posted by Running on empty at 16:18

I've been trying to find a world map by energy type but it's hard. I didn't realise the Aussies used to much coal.

I read this post yesterday and only just got the 'generation' reference today :)


Ah, yes, the great My Generation song, love it. I used it in another post, elderly people singing it.

Today I watched as a mechanical rolling machine ran over new bitchumen on our highway. I was quite excited, daughter couldn't understand why, but I'm fascinated in how things are made, how they work. We take so much for granted in our world.

Yes, Australia has lots of coal, especially in our region. Fascinating to think it was once an ancient forest, populated by prehistoric huge creatures that died out. Now we burn the last vestiges of where they lived, roared, and ate.

Pri.org has info but I couldn't make the heat maps show up on my iPad....

We have a lot of windmills in the farms of the Michigan thumb. Some of the people that live near them complain of the low hum they make. They said it doesn't seem bad until you hear it all the time. Personally I think a combo of solar and something more storable would be ideal.


Yes, windfarms have to be a certain distance away from houses here now. There are some that were built before the rule.