Following the increase, in last year's Federal Budget , in the GST (Goods and Services Tax), no new IEDs (Improvised Explosive Devices) have been found secreted under burquas by Security at Parliament House of Australia.
Experts postulate that this is due to the components becoming too expensive, even on a Senator's allowance.
In other news, the incidence of lung cancer deaths has fallen sharply, following a vast reduction in smoking . This occurred since new universal unisex burqua uniforms caused so many human torches.
Outshone, the KKK have switched entirely to daytime marches, carrying colourful fringed sun umbrellas , and wearing diamanté g-strings and matching blingy thongs (flip-flops.) David Duke was quoted as saying "sex sells, and polo shirts are so last decade", as he celebrated his first five year anniversary in Australia , following his expulsion from USA by President Madonna . She is currently homeless having blown up the Whitehouse when drunk on Trump Wine.
A contingent of budgie fanciers, (budgerigar , a small Australian bird) , allied with representatives of animal rights groups, clashed violently with a KKK group led by former Prime Minister Tony Abbott in Sydney last Saturday. They made national headlines on What bird is that hidden in those jocks . com. So far, no-one has claimed it as fake news.
Runningonempty, your trusted news sauce. 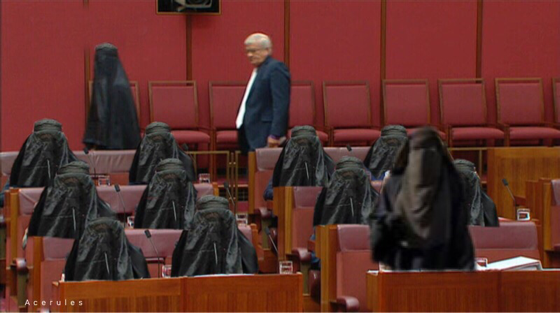 Today an anti Muslim senator called Pauline Hanson wore a burqua into the Australian Parliament, to make a point. I thought it was hilarious. I wondered how many senators feigning fake outrage went home to have a belly laugh. Of course, some of them were really upset, but I doubt all were.

Ha, I have to keep trying to work out if this news is real or just for fun :) it's entertaining though.

Did the parliament come to any conclusions?


The one now? The left protested the demonstration by Hanson, now the people are debating in Vox populi polls. No conclusion by parliament but platitudes.

It's a global issue. Having lived among them, I have first hand opinions.

I couldn't open your link Cath.
It is a bit funny but then I have no religious sensibilities and I just think they look like the dementors out of Harry Potter so find them hard to understand or indeed take seriously.
The only thing I do object to is that they have complete anonymity due to their identity being complete disguised. Is that entirely fair?

No it's not, says Runningonempty, to Fizzfan.