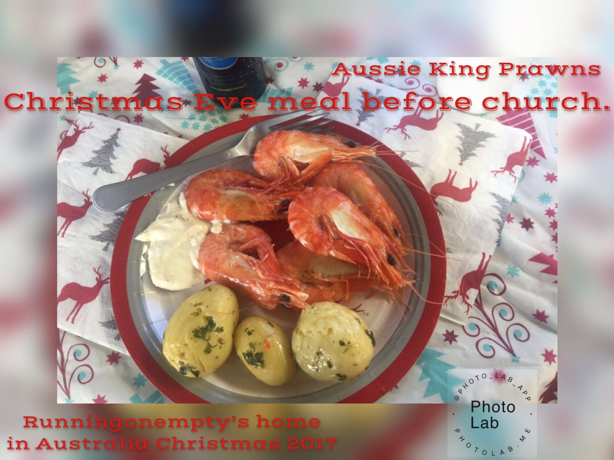 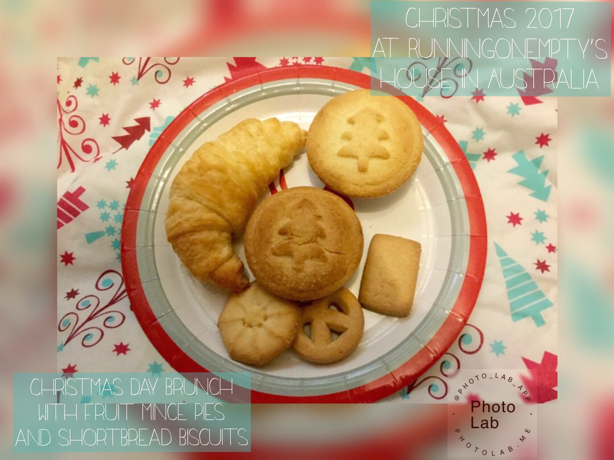 Going to church the night before meant I had time to play with tablescaping , before this Christmas lunch, our main meal. Now was a good time, with all the props for her 16 th birthday in the house, that would mostly be sold afterward. The weather was perfect for eating outside, in the mid 20s centigrade. 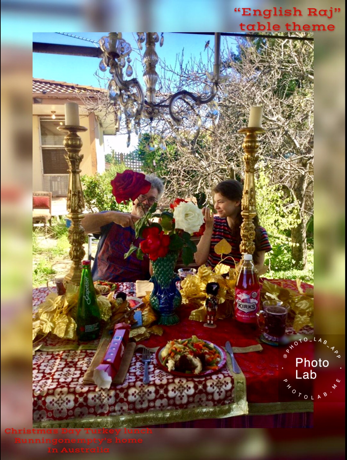 I was looking through our linen cupboard for a suitably rich looking tablecloth , to cover the larger glass table in the backyard carport. At the last minute, hubby had finally pulled out the self seeded tree and weeds that were growing underneath it, and relieved it of its burden of upside down furniture awaiting our paint brushes. Acerules gave it a hot soapy wash. Hubby arranged a couple of shrubs in pots, on the perimeter. Unfortunately our lovely old apple tree nearby had died this year, which needs removing. I miss it’s blossoms, canopy of leaves and of course fruit.

I’ve always collected household textiles, often secondhand/vintage ones. I had a fruit patterned tapestry weave tablecloth in mind. Until I saw the spiders on it, that is. Forget that, I thought, and grabbed more recent purchases from the pile, some smaller red and gold brocade cloths made from saris, I had bought for our side tables in the dining room, cheap and pre owned, from an eBay seller who was cleaning out her mother’s possessions. To go underneath I chose a red tartan doona cover that’s seen better days, but I love tartan.  I grabbed some toning napkins too, mustard, gold, and burgundy,  giving the spiders a wide berth. Deal with them in the new year, I thought.

Ok, I like a challenge, and I own a small collection of musical instrument playing dolls, from my music teaching days. I grabbed a gold sari wearing  Indian veena player and a Scottish bagpipe player, plus my daughter’s Indonesian vaguely renaissance gold wooden candlesticks, bought long years ago for her Mary Queen of Scots bedroom, from a wholesaler’s outlet in Sydney. I carted out one of the second-hand crystal Marie Thérèse chandeliers we bought on eBay to renovate for her 16 th party coming up, and brought home on the train from Melbourne. Hubby hung it from a hook, removed the globes (bulbs) and added battery candles collected for the 16 th party. 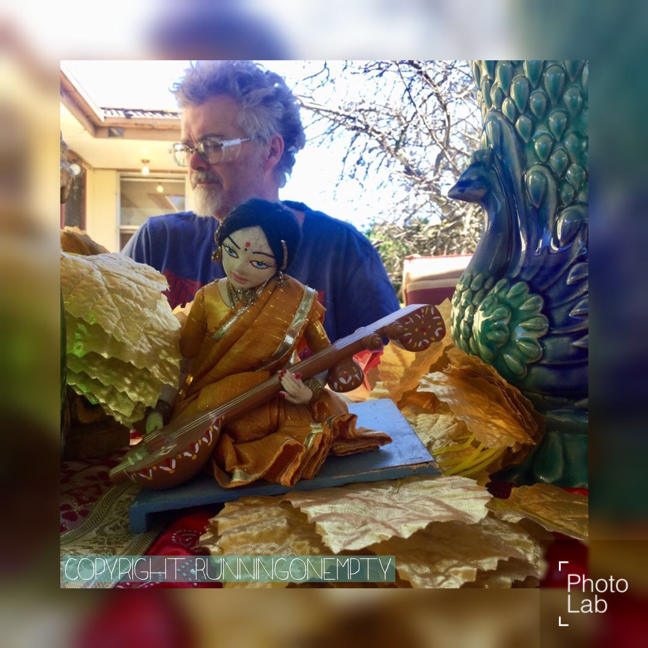 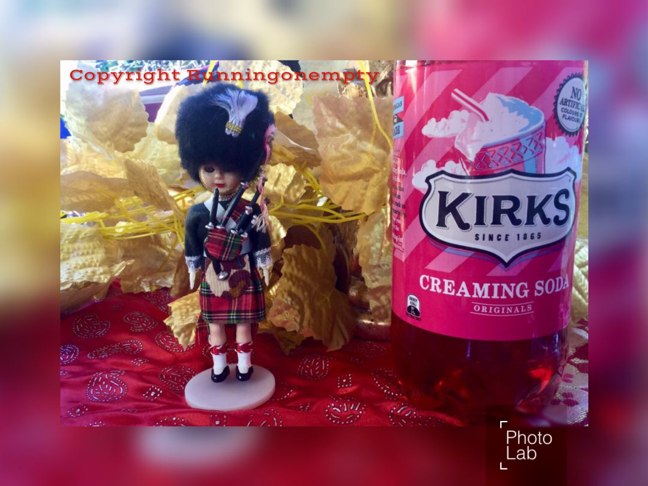 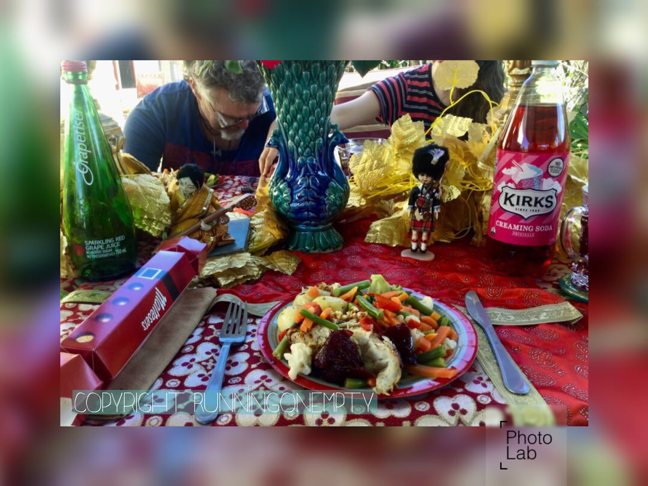 Although I was using paper plates outdoors, I got out some lovely glass tankards we have in our leadlight cabinet, with fleurs de lys on them, and gave them a warm rinse to remove the light dust. (How does that get in a closed cabinet anyway?) The centerpiece was our blue and teal peacock vase we got for our wedding anniversary mid year, I picked some vibrant roses from our garden for that, saying hello to neighbours walking past. Some cheap turquoise second hand , hand painted ceramic coasters from Ebay to match the vase completed the colour scheme. 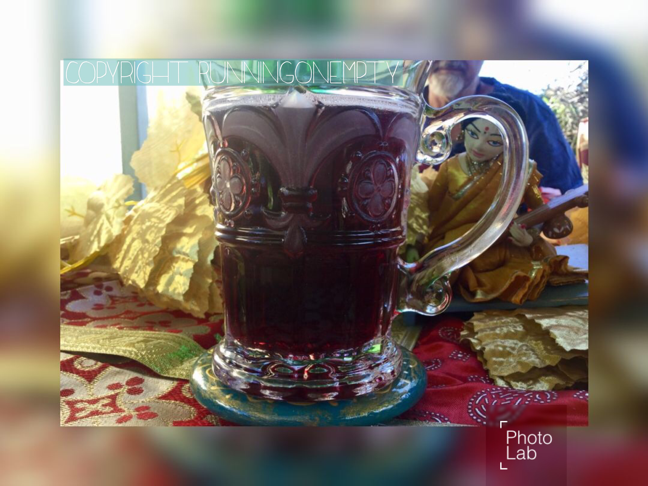 The last few months I’ve been on the mailing list of several decorating blogs from the US. Their style is all about the modern French provincial/farmhouse, they make very nice , mostly neutral rooms. It’s pure escapism for me. Over Christmas they’ve nearly all pictured long drapings of greenery like magnolia, on dining tables or mantelpieces, so, tongue in cheek I got out a shiny gold swag of fake vine leaves set aside for Acerule’s baroque party. I wouldn’t cut it in their sensible blogosphere, but I was having fun, and so were the family, this is Aus, and we are a bit cheeky here.

The bon bons , or crackers, as they’re called here, were an unusual treat, filled with chocolates, not explosives and hats, I don’t eat chocolate so only bought two. I liked how I could get them individually, when the smallest box of traditional crackers available, carried 8. There’s a niche in the market for smaller families.

This Christmas I had decided to serve turkey, ham, supplied by hubby’s employer, and prawns. I’d bought most of the ingredients in the months before, to spread costs, and take advantage of sales. The turkey was a better size for a small group, a frozen rolled breast . It was quite tasty, defrosted in the fridge for two days, quick to cook, and no leftovers to find space for in the fridge. The instructions said “not suitable to microwave” and DO NOT REMOVE FOIL. As my gas stove (range) is still on the front porch, (the joys of renovating without taking out loans), I did remove the foil, squashed it into a dish , covered and microwaved it, for a third of the time listed for an oven. No worries, mate, it was quite tender, and because I was distracted by Acerules Finally decorating the indoor tree and putting the presents underneath, the turkey was “well caramalised” ;) 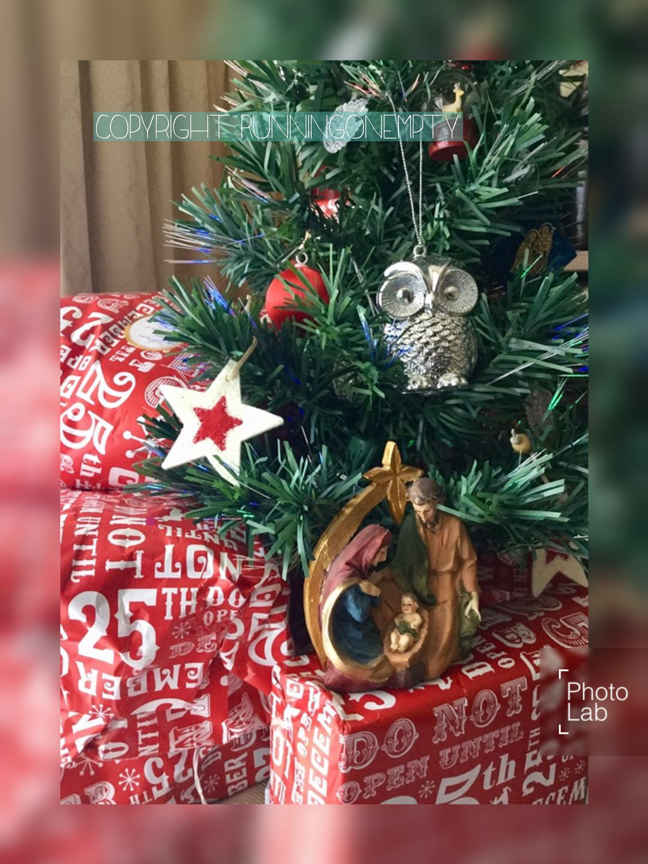 I added American made cranberry sauce, and vegetables. Due to high utility bills , I’d decided to spread costs by having the large Aussie prawns on Christmas Eve, and ham with apple sauce from Boxing Day onward (after Christmas Day ) , and we didn’t buy any alcohol this year. 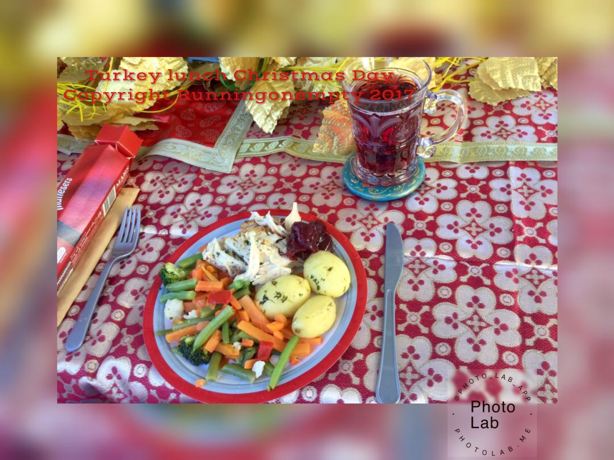 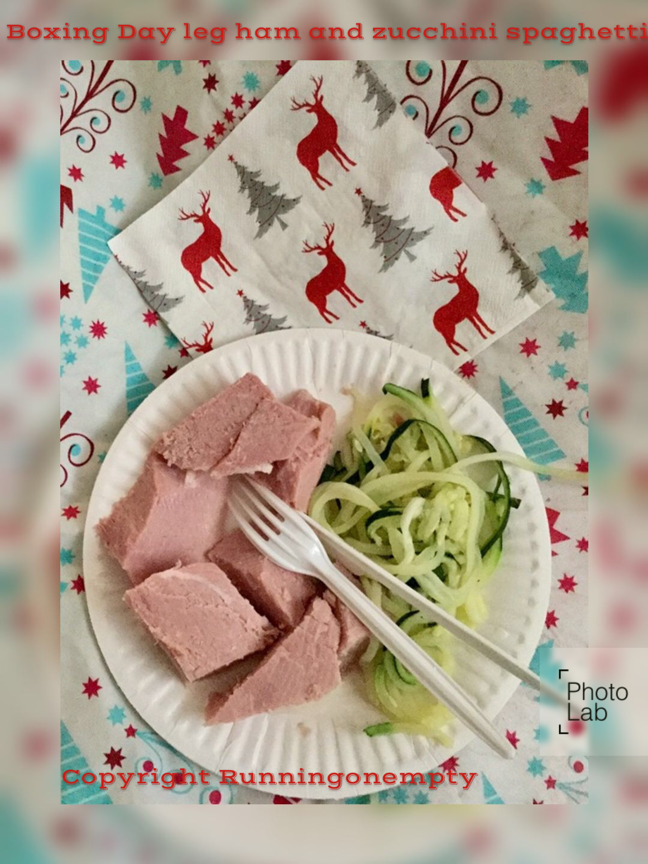 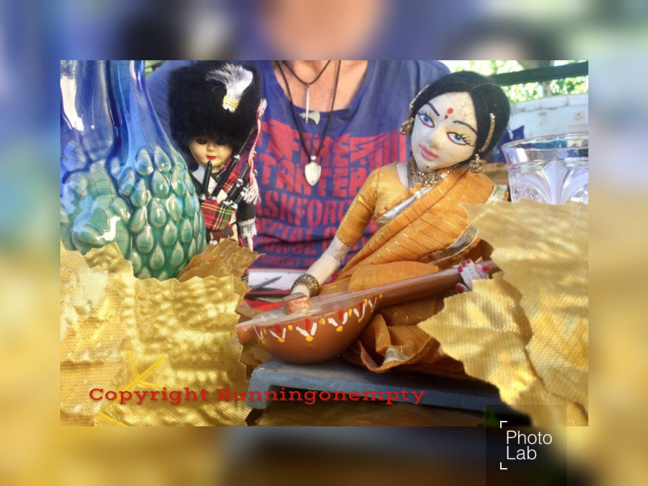 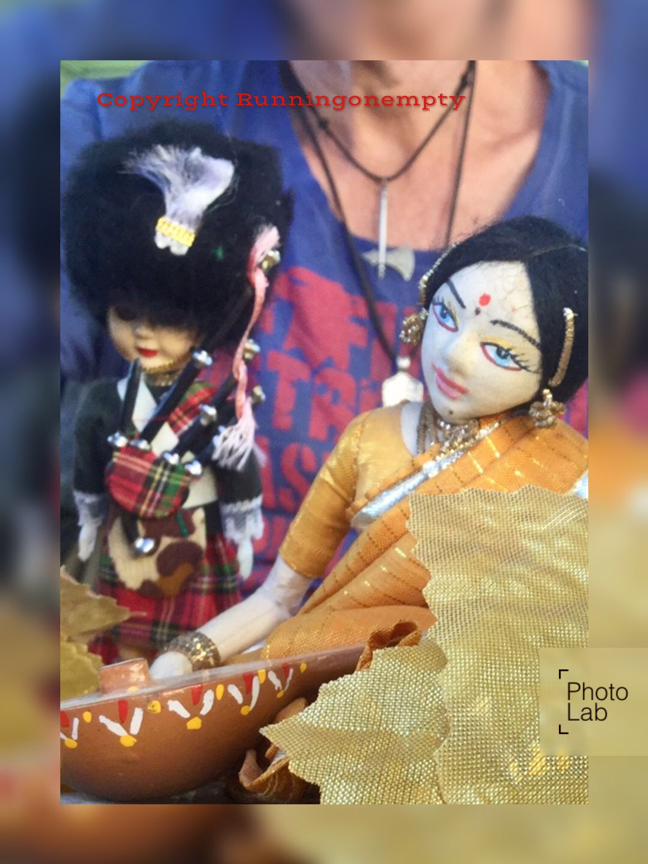 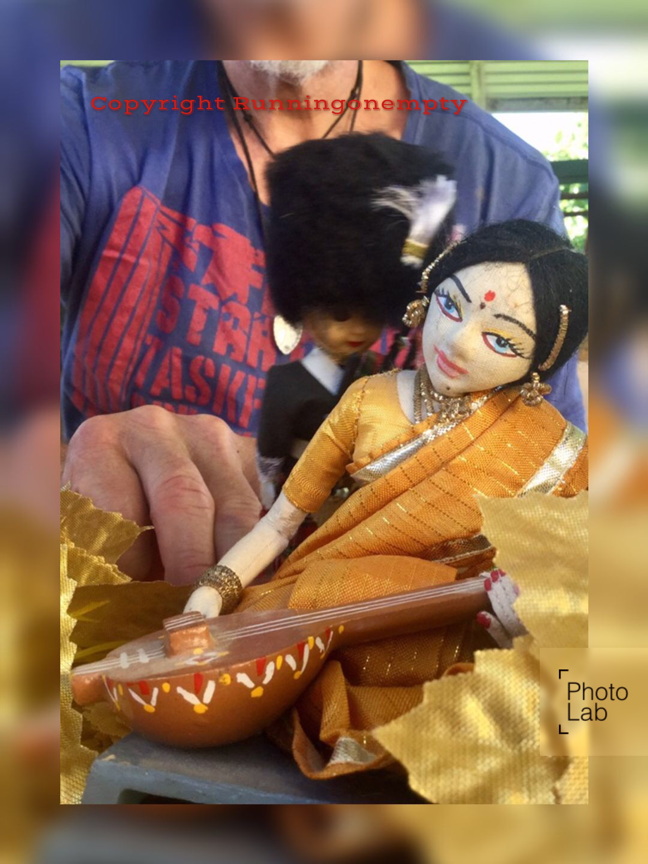 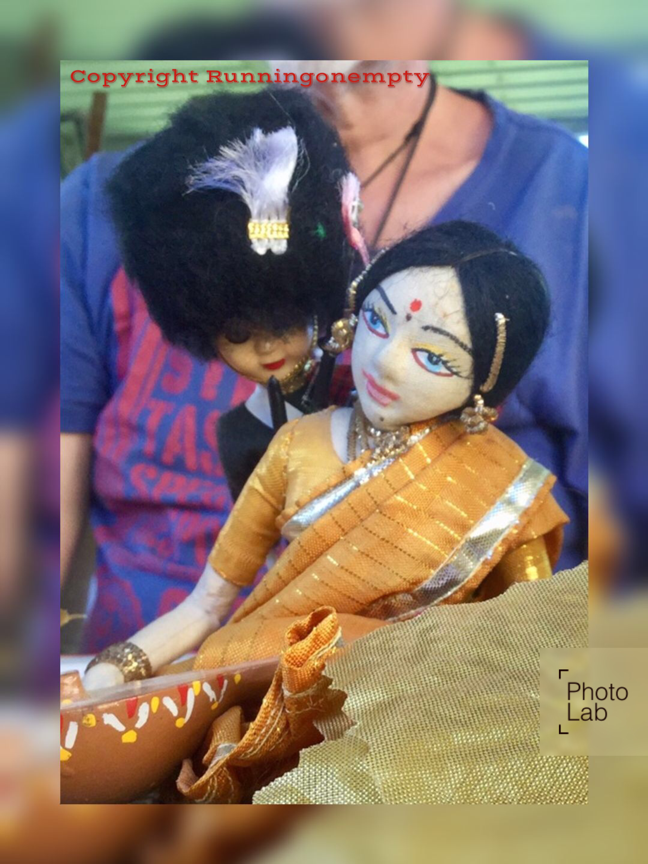 We had a traditional English style Christmas pudding heated in the microwave and served with ( reduced fat) cream and custard. 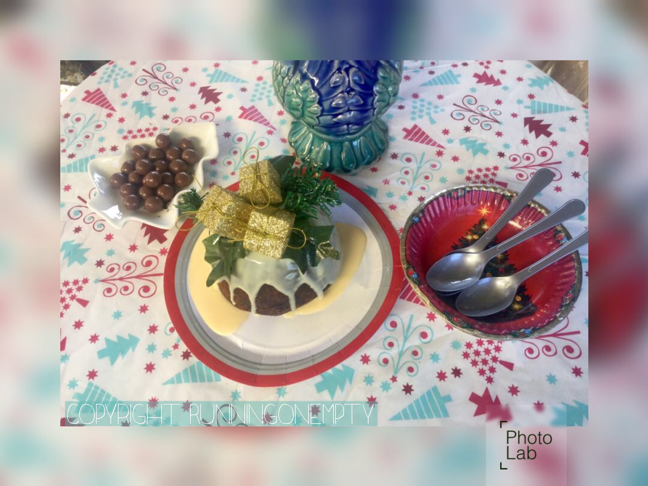 We sat around outside , playing with Christmas presents and chatting with a friend that dropped in, had a light meal of our chook and duck eggs there for dinner, put on mozzie repellant, as it got dark quite late,  and finally went inside at ten pm, carrying our battery lanterns in last. After all, candles look great outside, but unless they are in hurricane lanterns or similar, they do blow out. By all means, have your fancy props, but have battery backup! Finally I turned off the stereo that had been playing CDs for hours, of Bing Crosby , Nat King Cole and similar, singing about Christmas in the snow, while we enjoyed our mild Summer weather.

Oh I would love that nice warm weather. Looks like a nice Christmas Day. I’m pretty lucky if I get dinner on the table anymore, so I enjoyed your decor. It adds to the occasion. Thank you for sharing.

Thanks for your comments!

You might not like our weather Monday, it’s going to be 41 deg centigrade! Flipping hot! Crazy how you’ve got a Winter hurricane hitting your East Coast this week!

Cath, picture #4..the vase at the right of the photo…love it. Any information you can share?

Hi, Judy, we bought the vase for our wedding anniversary last year in a small local boutique that has since closed.

My brief search couldn’t find the exact same one , you might do better, but there are heaps of peacock vases, here are some in that colour way.

Hope that helps, and that your pro search can turn up the same or something similar you like.