A big draw to this exhibition, was the famous halo tiara owned by Queen Elizabeth 2nd, given to her when she was 18 by her mother the Queen, borrowed by her sister Princess Margaret for Elizabeth’s coronation, and worn by Catherine Middleton at her wedding to Prince William. 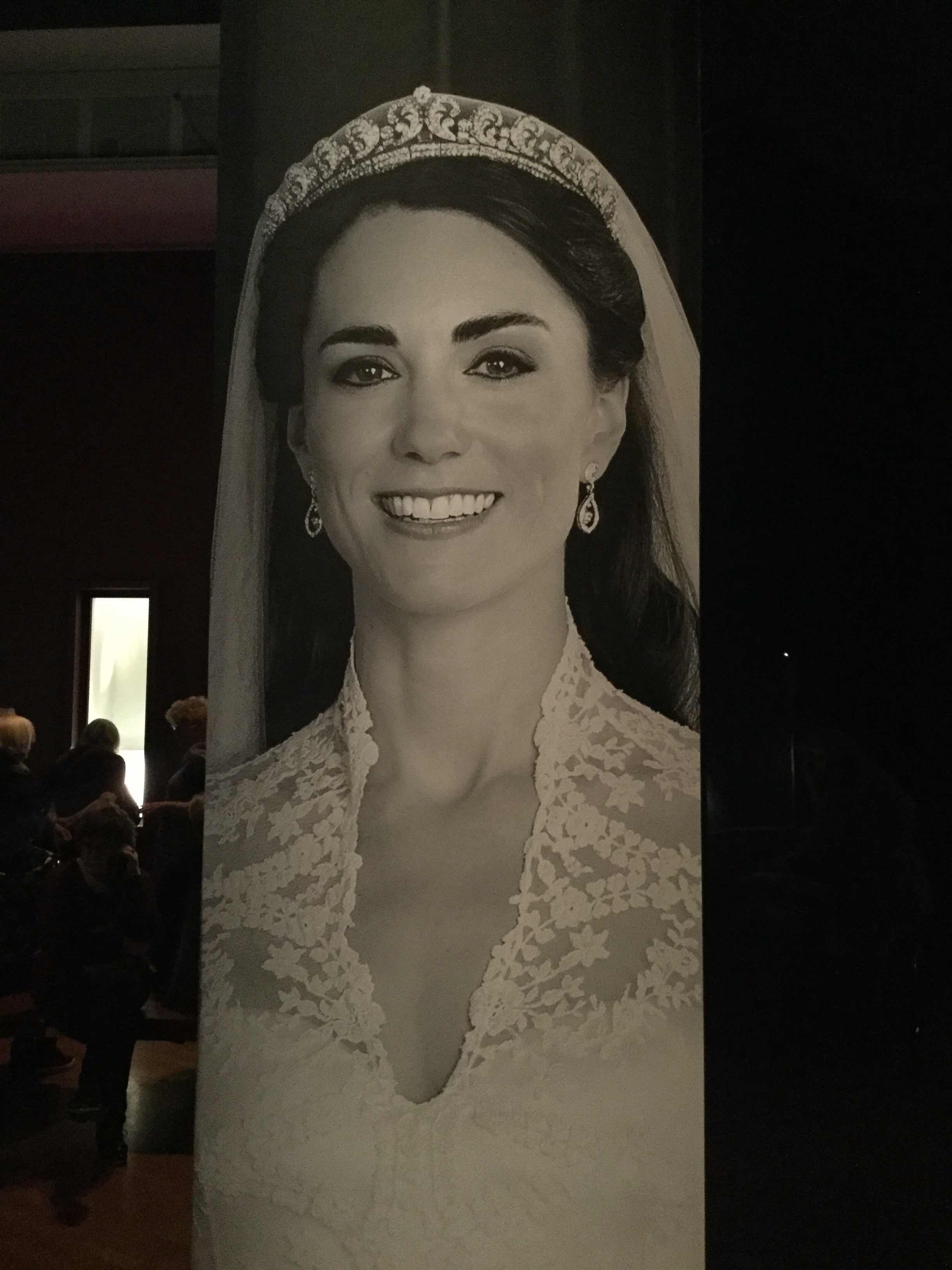 Although it was unfocused, due to lots of people behind me, I had to photograph Acerules with the historic tiara: 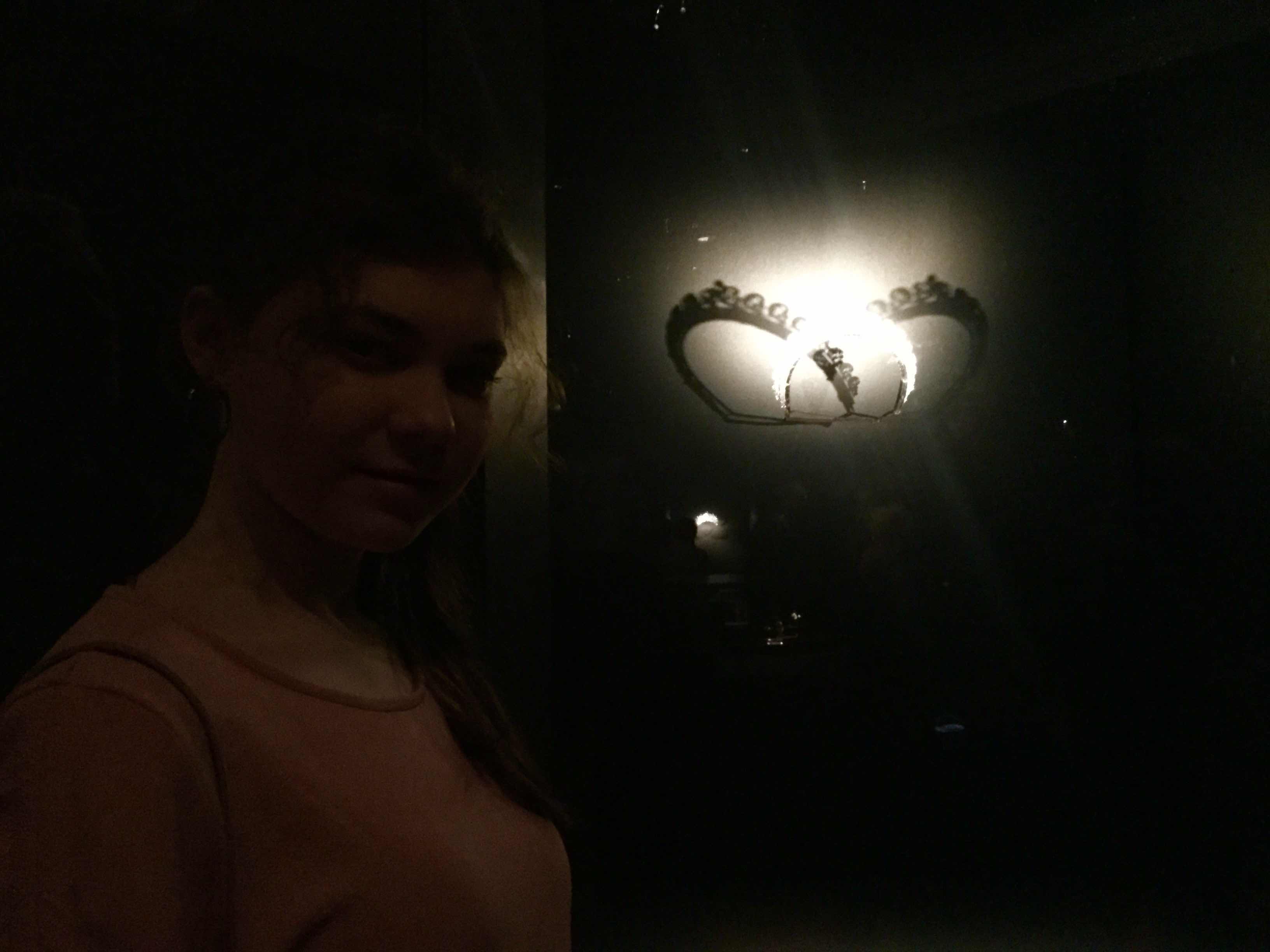 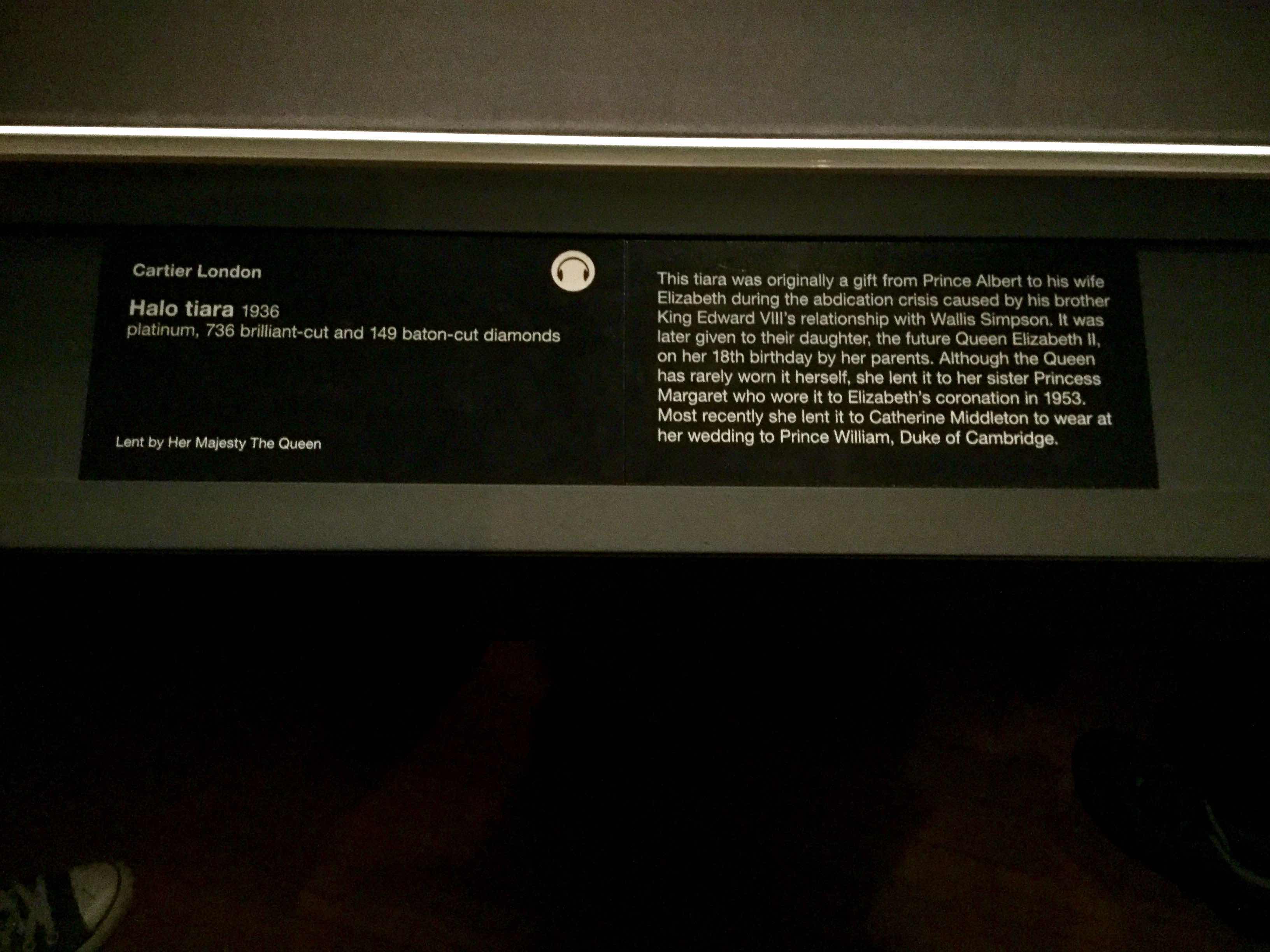 My photo of the actual tiara. Like all of Cartier’s diamond jewellery, it is very glittery. Cartier pioneered the use of platinum for its settings, which being a strong metal, was able to be formed very thinly, so that the settings showed off the stones better. 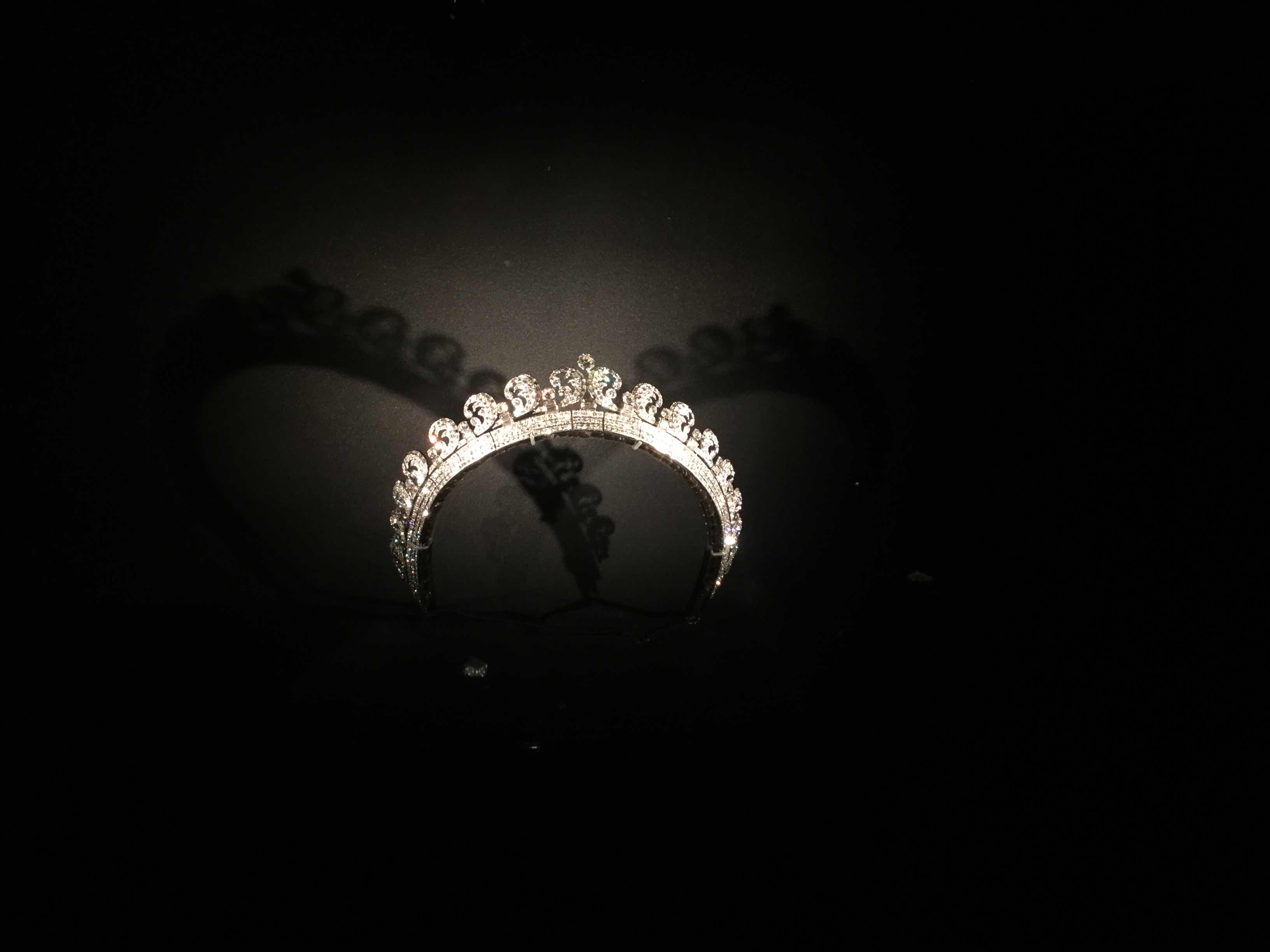 Desk clock, gift to King George 5 th on the occasion of his coronation, from his mother Queen Alexandra: 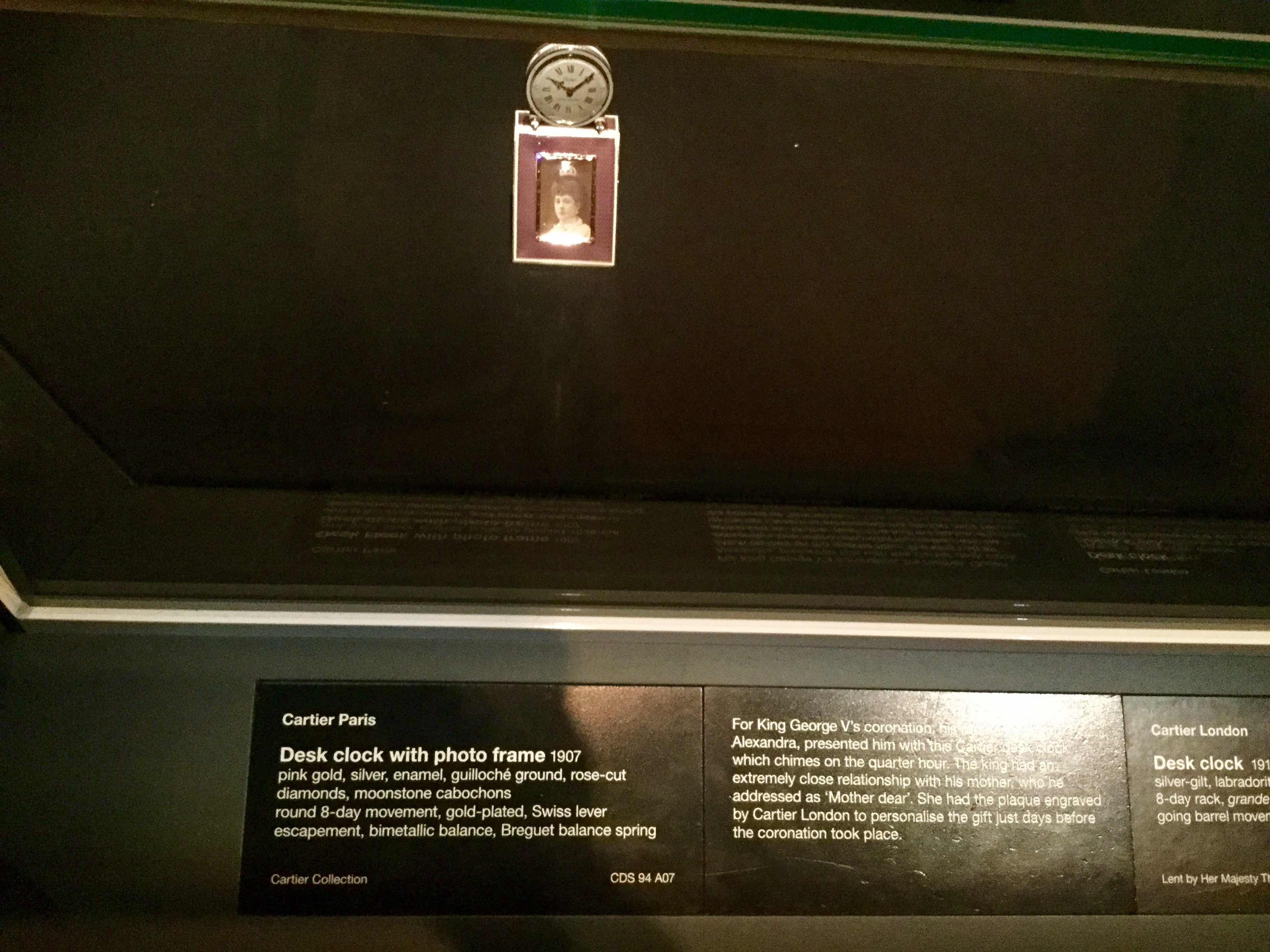 Acerules was very taken by this letter frame with a letter from royalty in it: 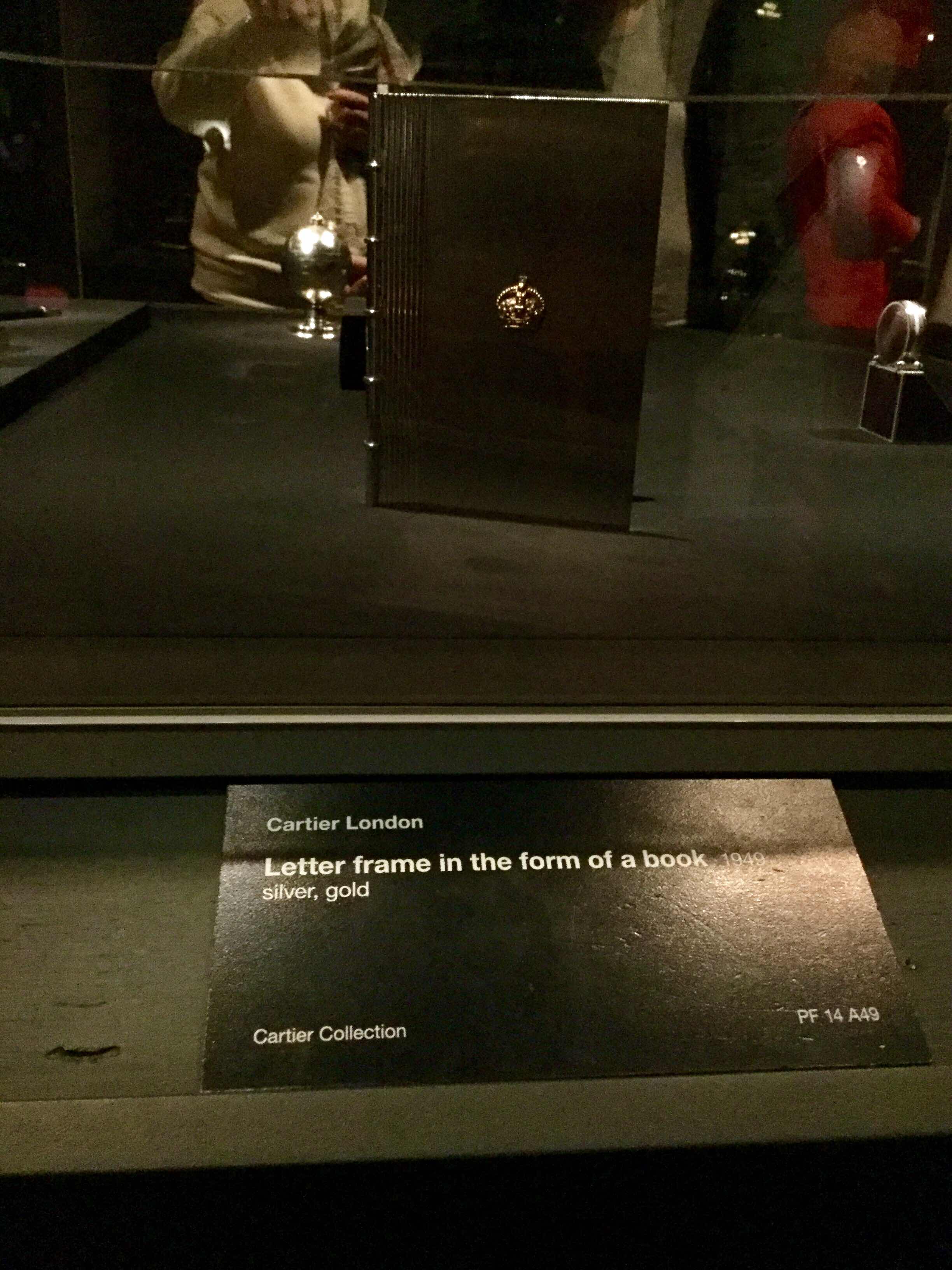 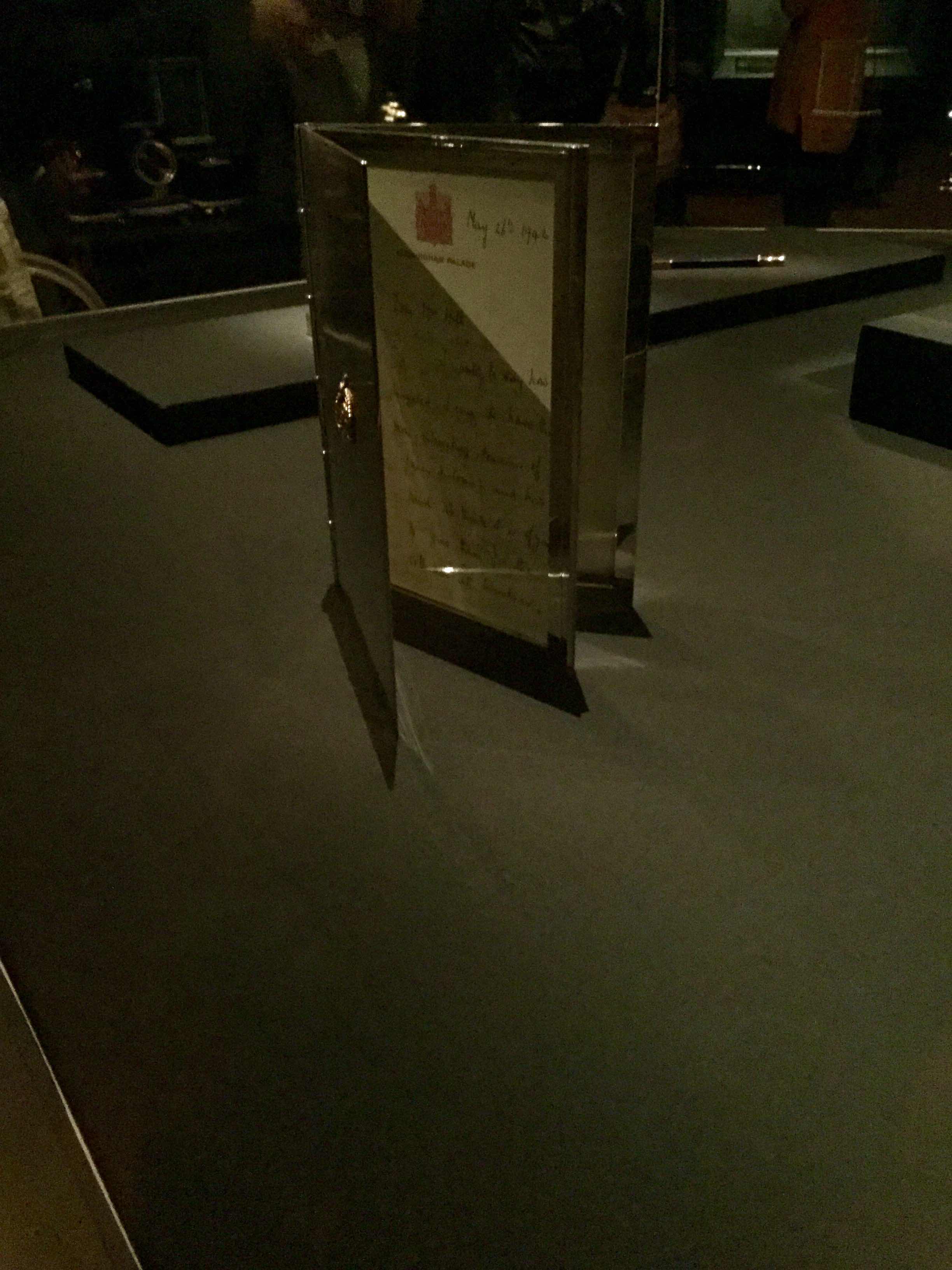 Queen Elizabeth’s desk set. “Inkstand of lapis lazuli and gold with a clock supported by a pair of inkwells and liner. The inkwells are square with canted corners with hinged raised lids and ropetwist decoration. The clock is an upright rectangle also with a raised top and ropetwist decoration, the gilt dial has the numbers in cabochons and gold pointers for hours and minutes. The Queen's cypher in diamonds, above and below the dial. The based is a shaped rectangle with a pen tray to the front which is engraved with the coat of arms of the City of Paris. The eight day watch style movement has a going barrel movement and Swiss lever escapement.

A gift from the City of Paris during the State Visit to France in April 1957. Presented at a reception at the Hotel de Ville.” - From the Royal Collection Trust website. 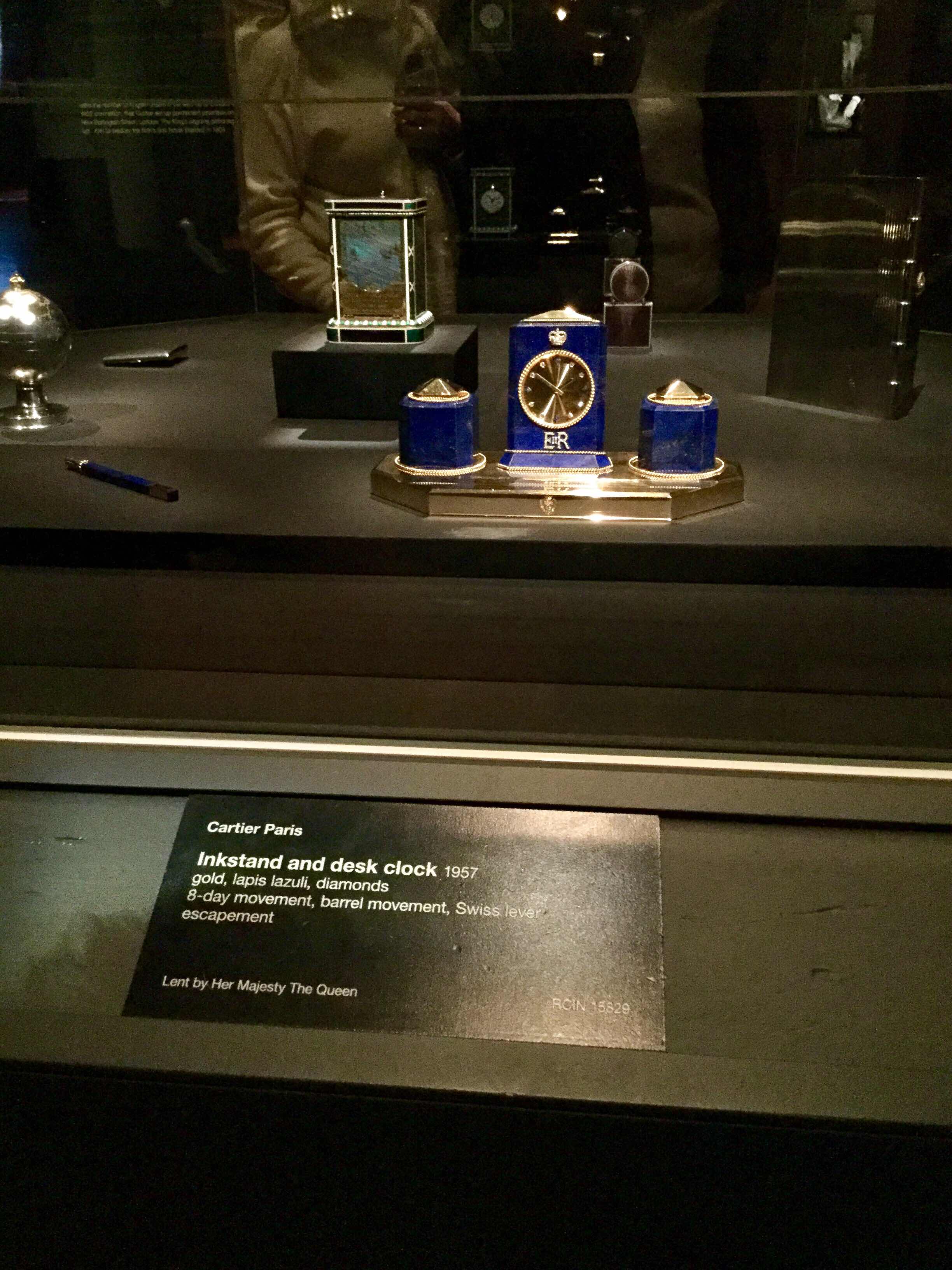 
The John Williamson diamond Brooch was a special order composed around a large pink diamond and smaller diamonds given to Princess Elizabeth and Prince Phillip by Dr Williamson, a Zambian diamond mine owner born in Canada; on the occasion of their wedding. It is often worn by the Queen, including to Prince Charles’ first wedding, on a turquoise dress. The uncut pink diamond Dr Williamson gave her was over 50 carats before cutting and polishing. 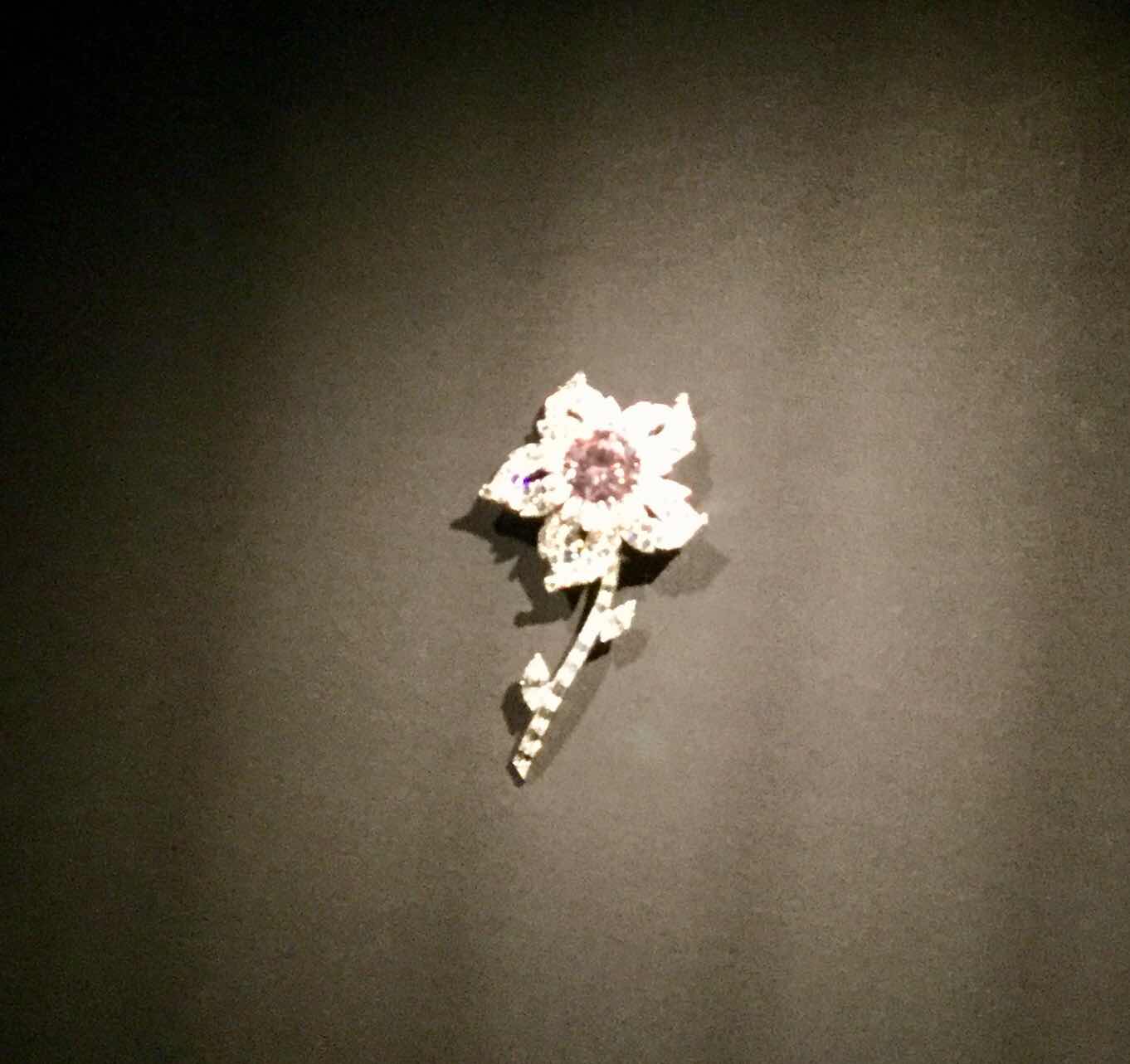 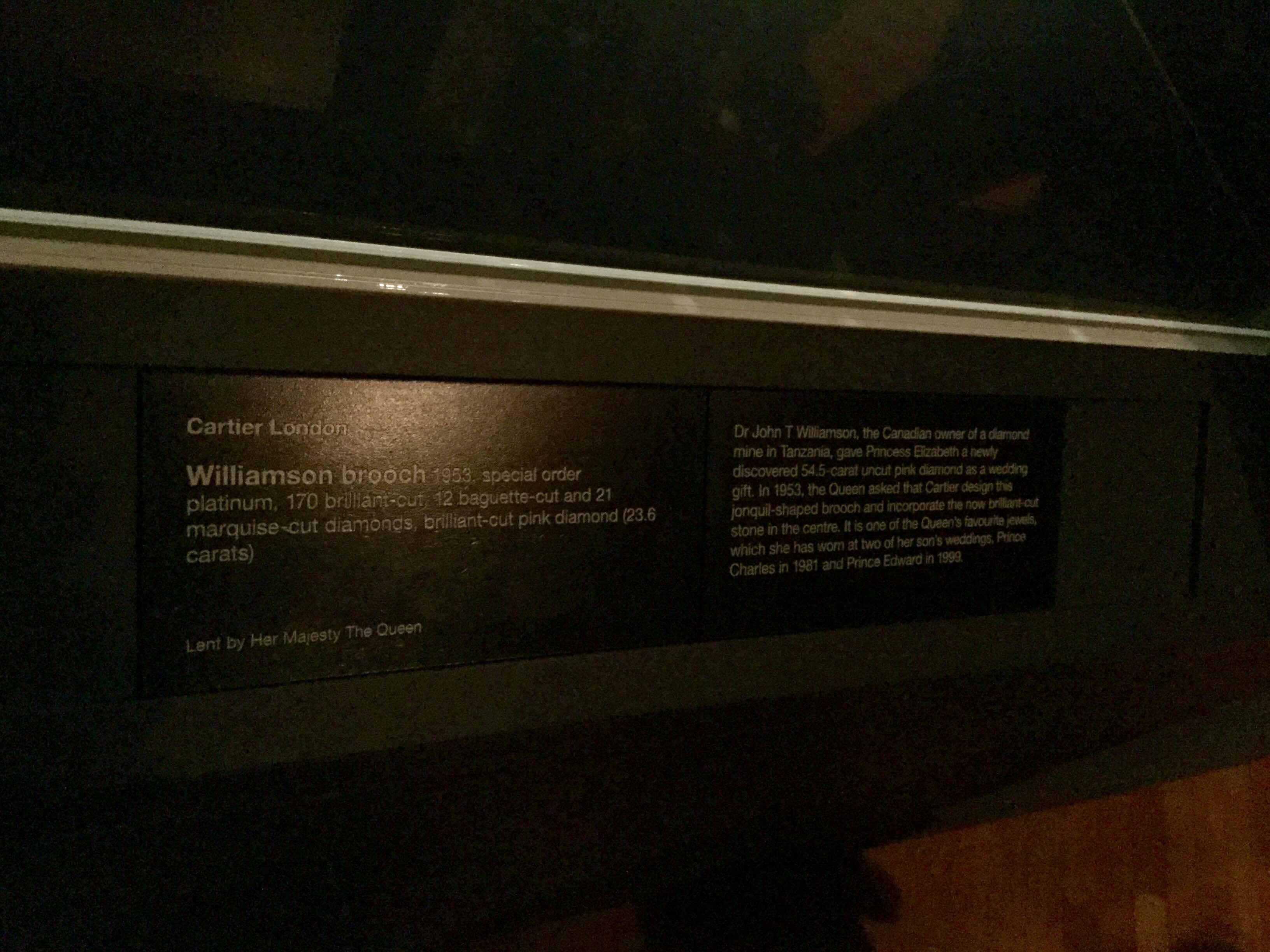 The Nizam of Hyderabad diamond necklace was a wedding present to the Queen from a very very rich Prince of India, who let her choose her own jewels from Cartier to be sure that she would like them: 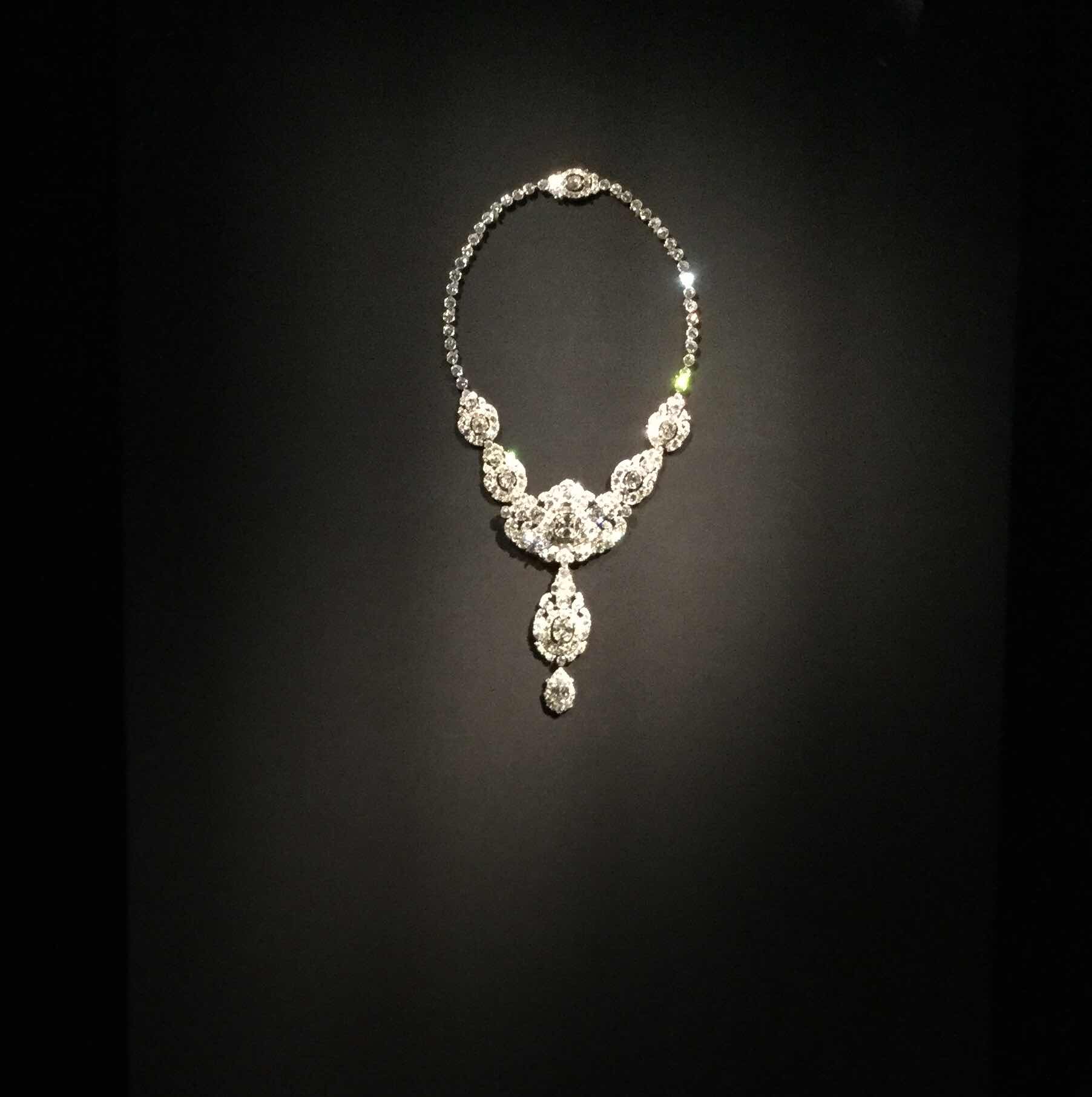 The Queen wearing the necklace in an iconic painting done of her in Australia, copies of which were in public buildings when I was growing up, often known as the “wattle portrait”, because of the corsage of wattle flowers , our national flower, that she was wearing. Duchess Kate was later to wear the necklace, on loan, to an official evening outing. 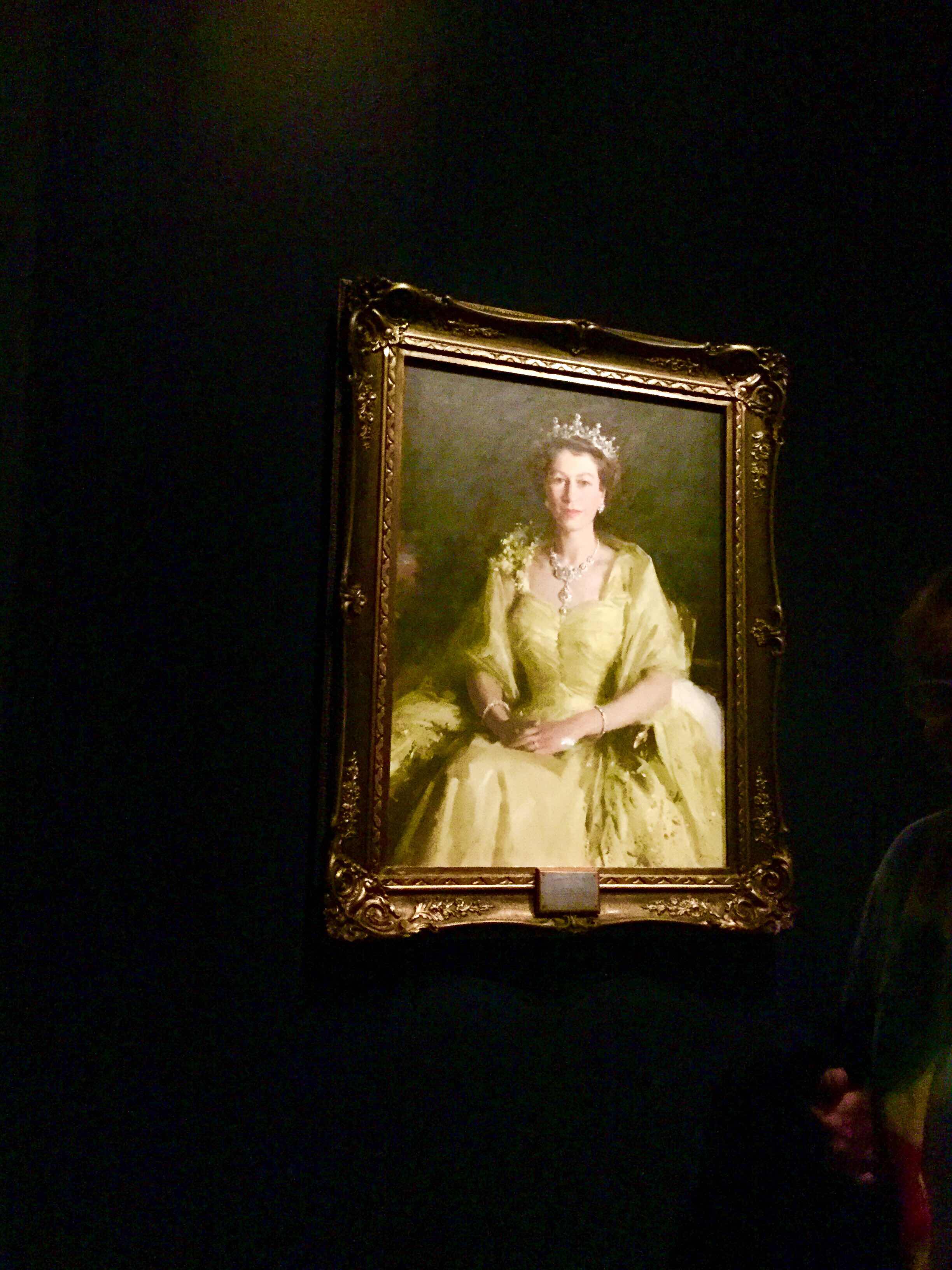 “William Dargie depicts the Queen wearing a Norman Hartnell mimosa gold tulle dress adorned with sparkling gold wattle motifs.
Hartnell designed the dress for the 1954 Australian tour. It is unambiguously patriotic and easily recognisable as the dress worn during her first evening engagement of the royal tour in Sydney, and again to her last evening function in Perth before leaving Australia.”
“Her hair is loosely pinned back under a diamond tiara given to her by her grandmother Queen Mary and she wears a diamond necklace received as a wedding present from Nizam of Hyderabad” - National Museum of Australia website. A commenter on a website described the aquamarine tiara as the “LEGO tiara”. I cannot now unsee that. I like it though.
Cartier made the aquamarine tiara along with 26 other tiaras, in 1937 for noble guests to wear to the coronation of King George 6 th. I wonder if they will make more for Charles’ turn, when his mother dies? 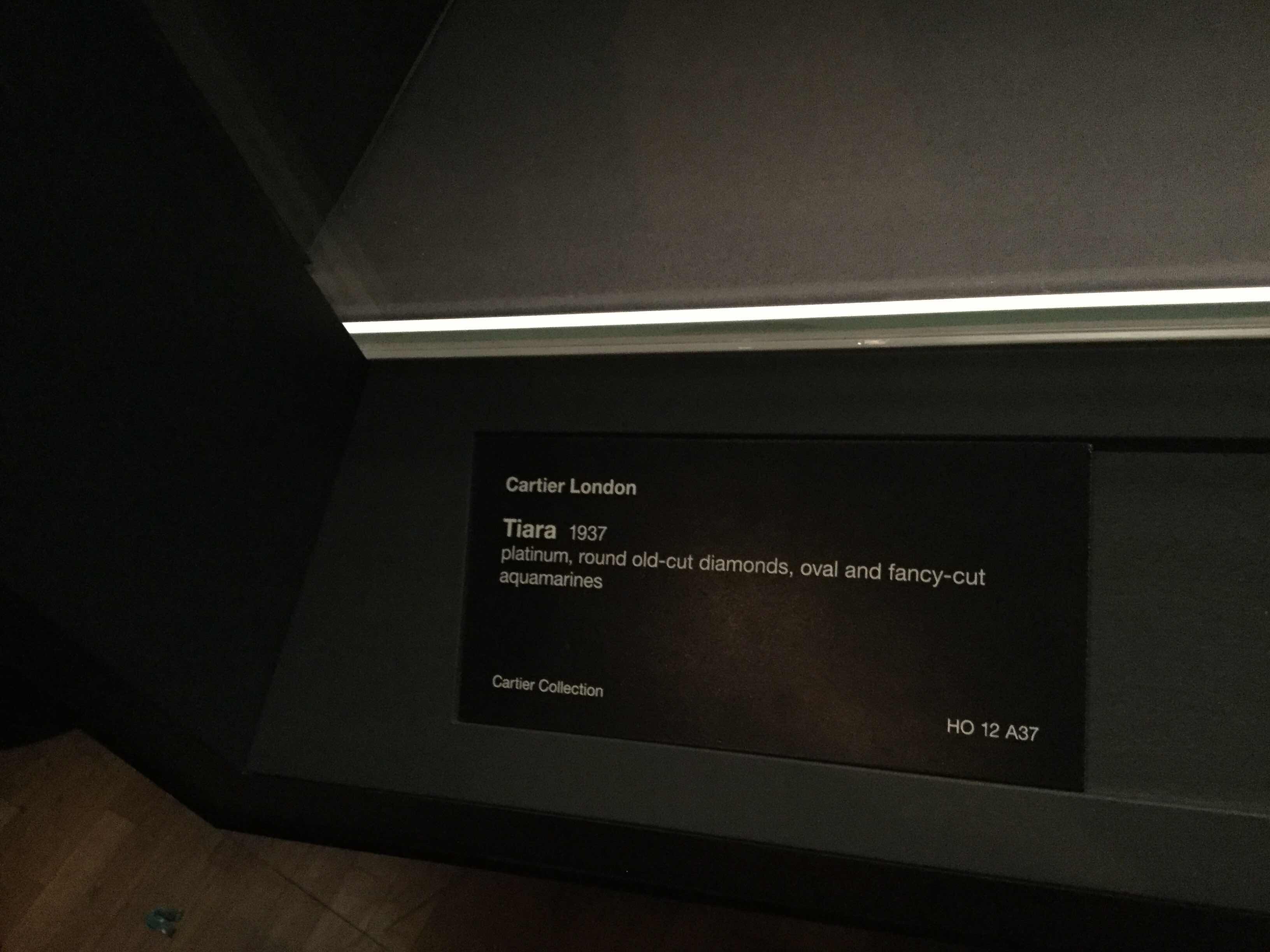 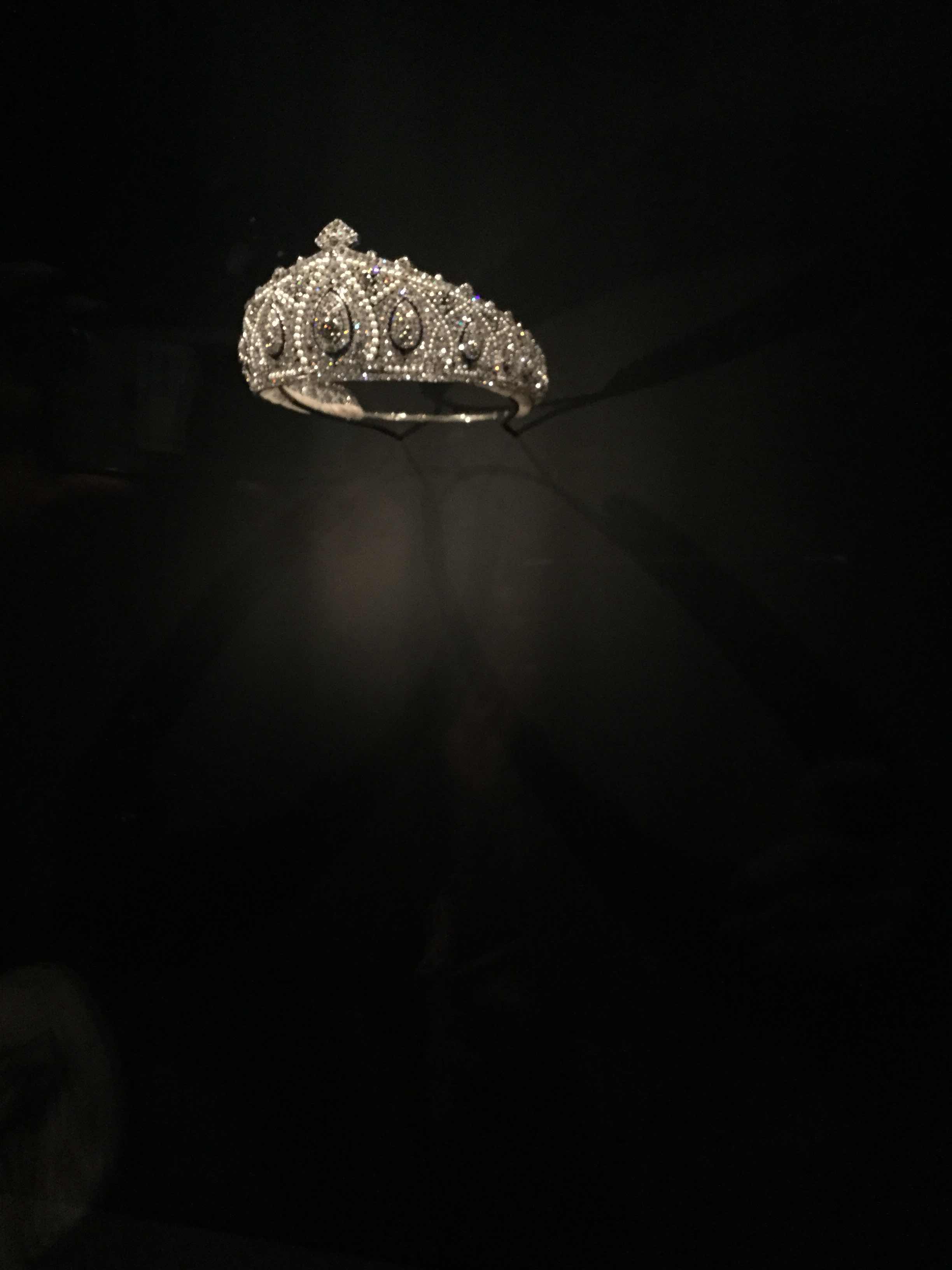 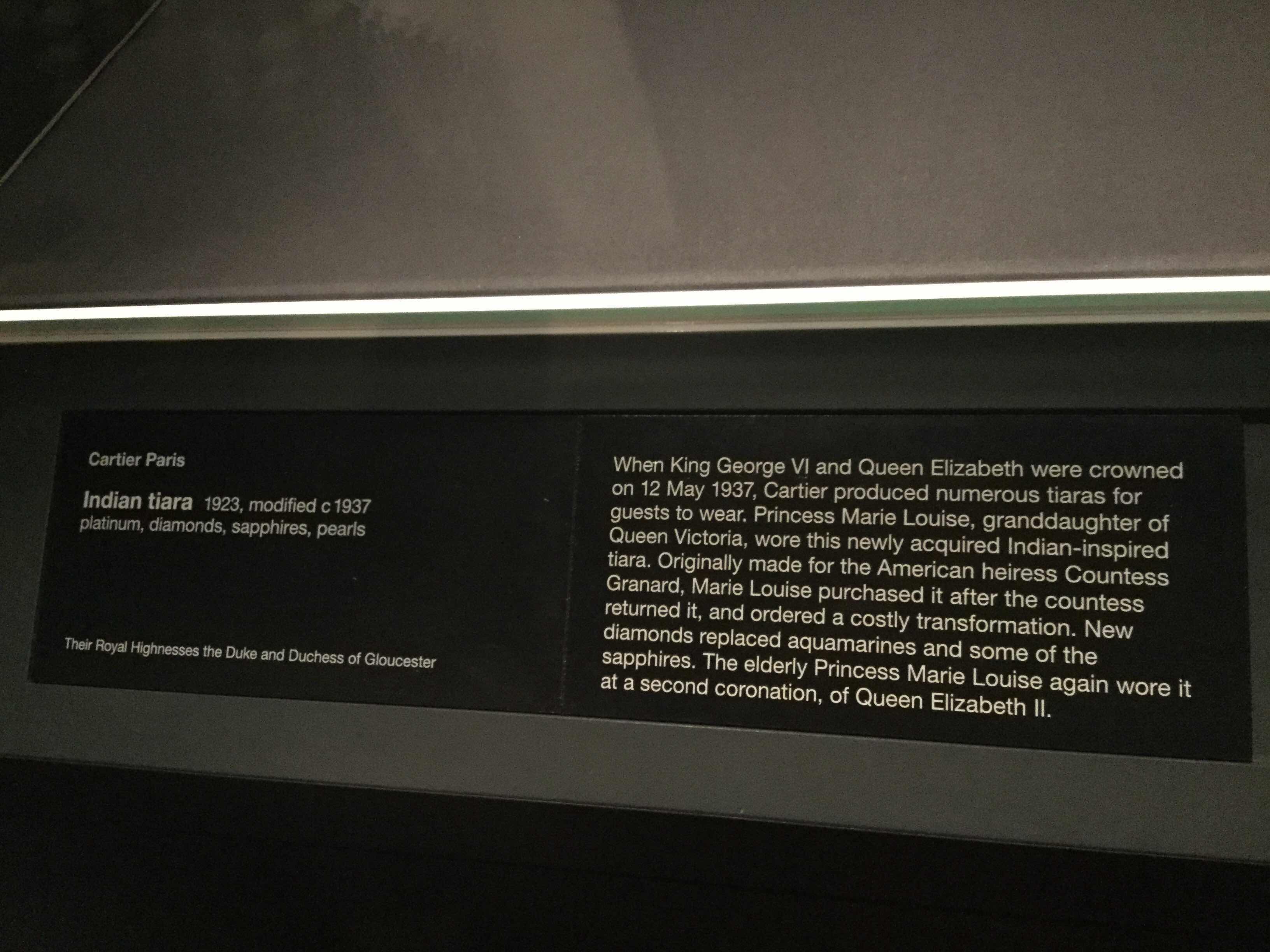 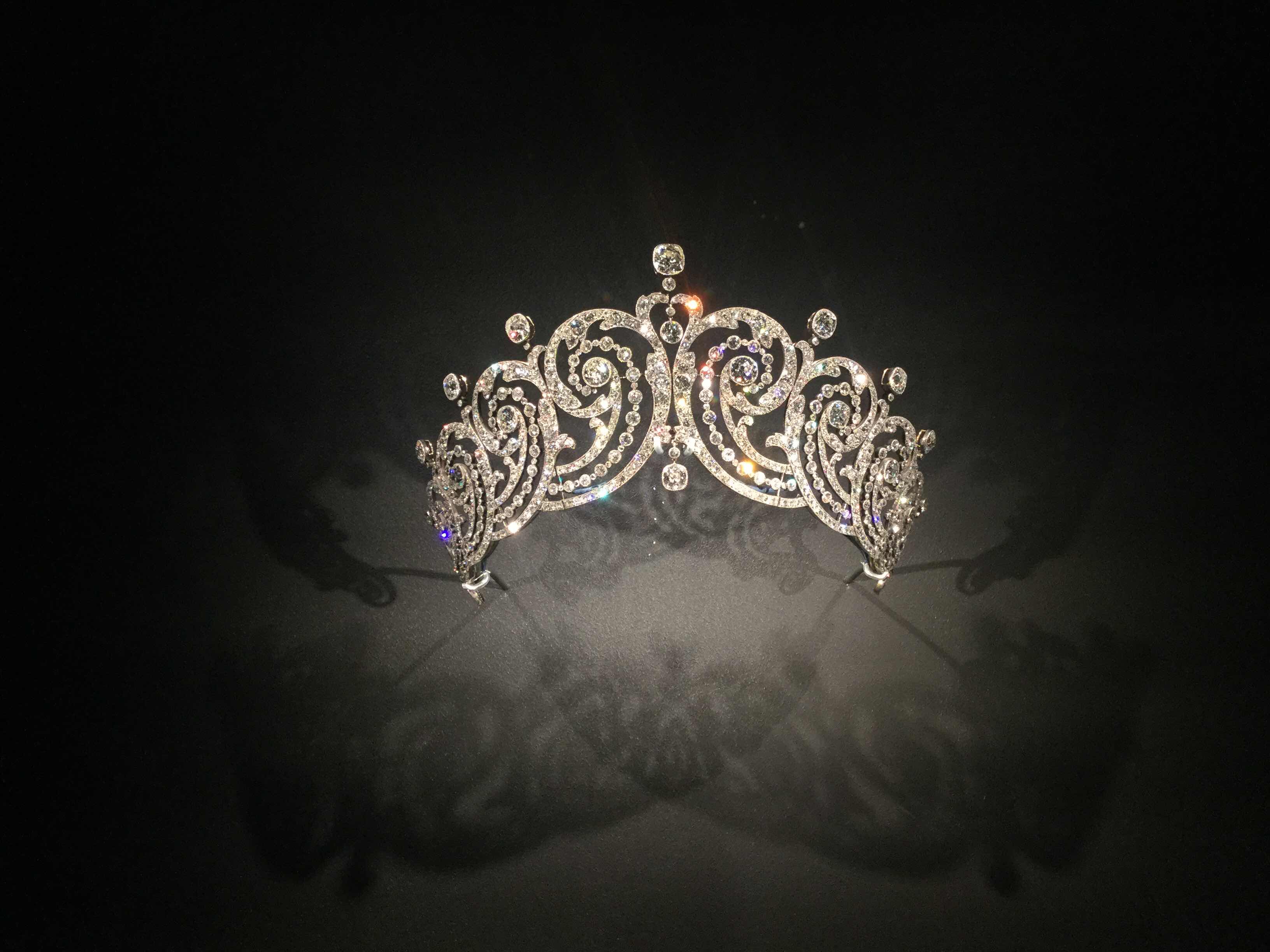 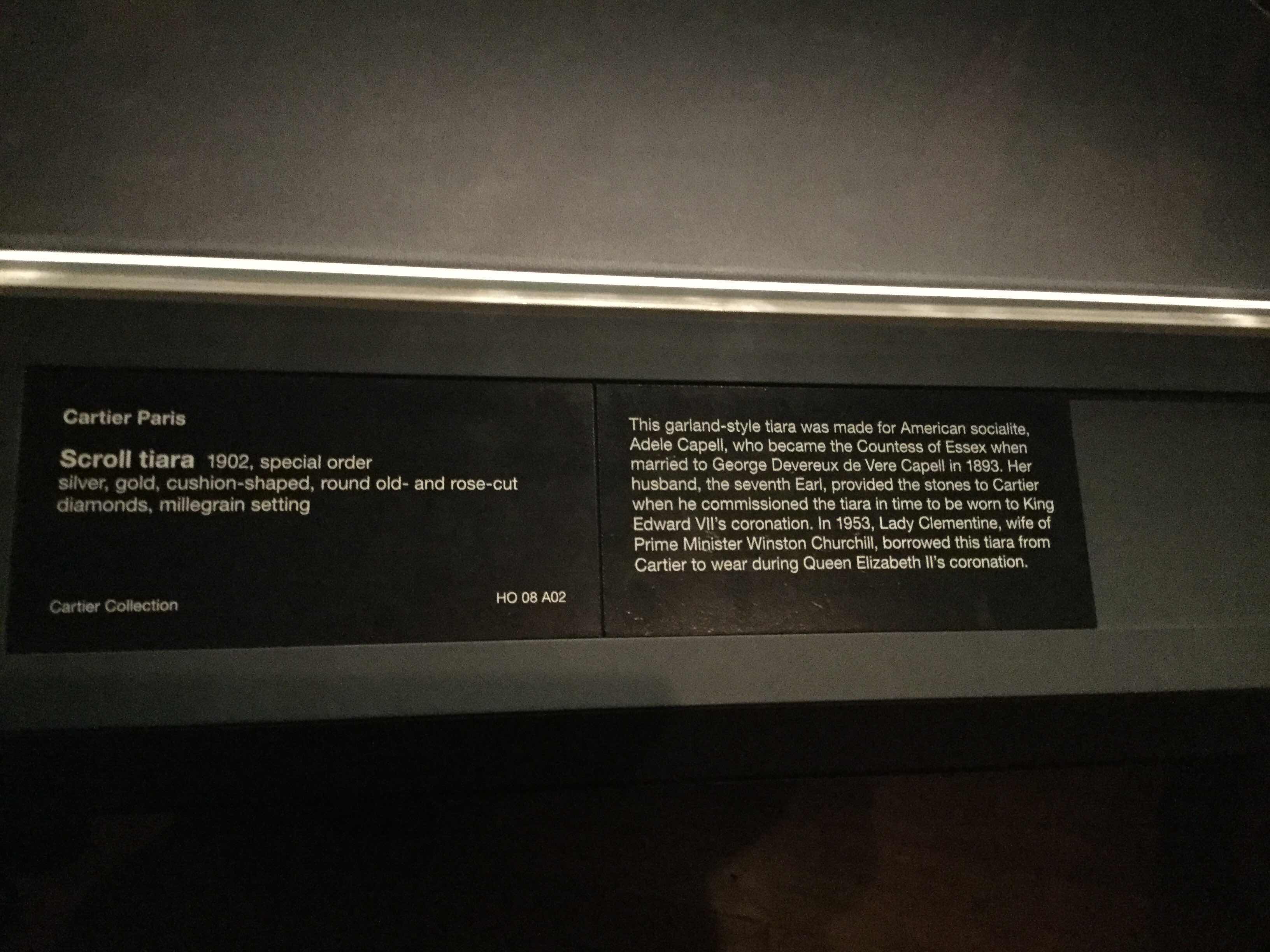 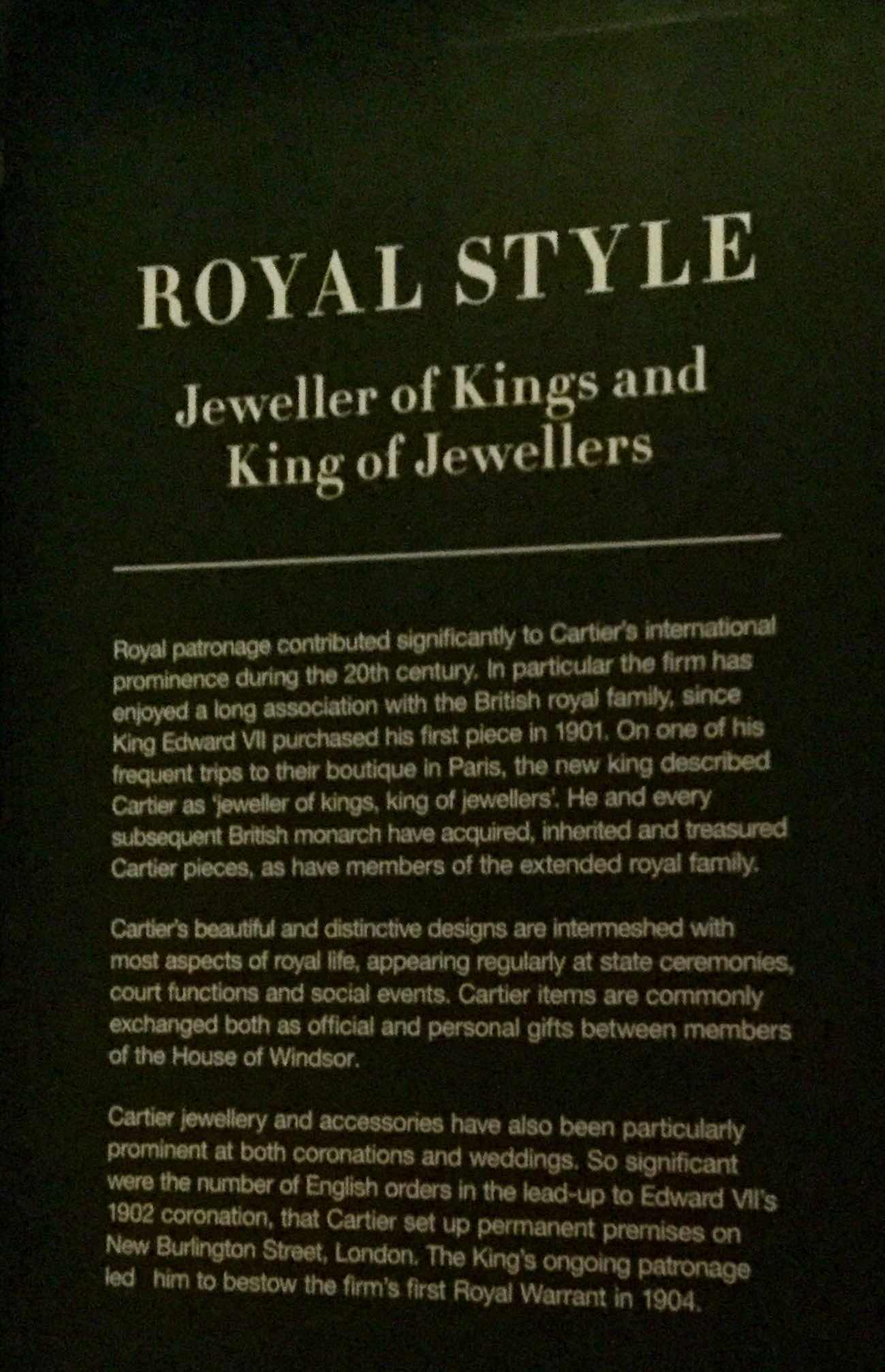 Princess Margaret, the Queen’s pretty sister, wearing the halo tiara (as seen in the exhibition, at top of this post, ) and her rose brooch: 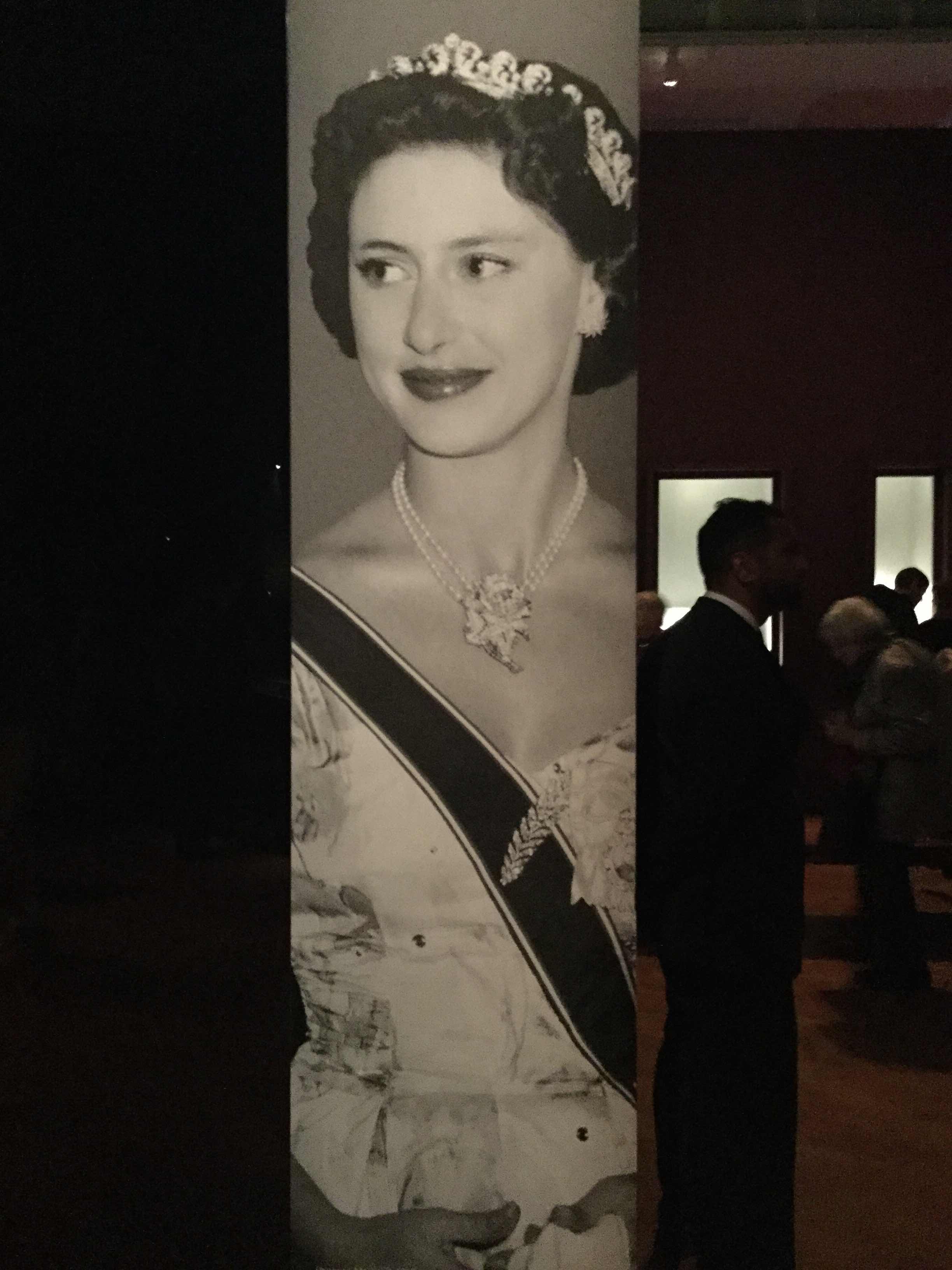 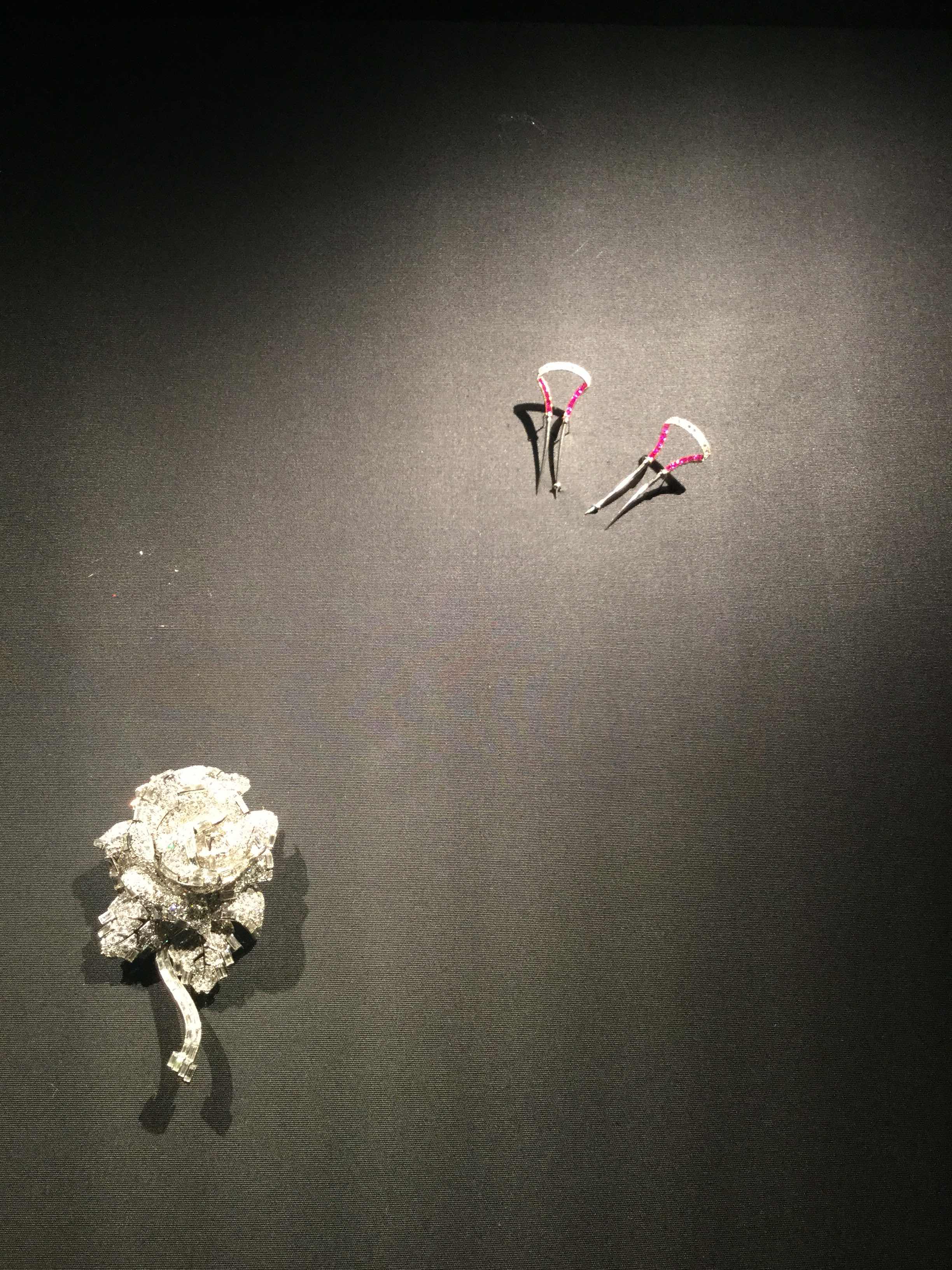 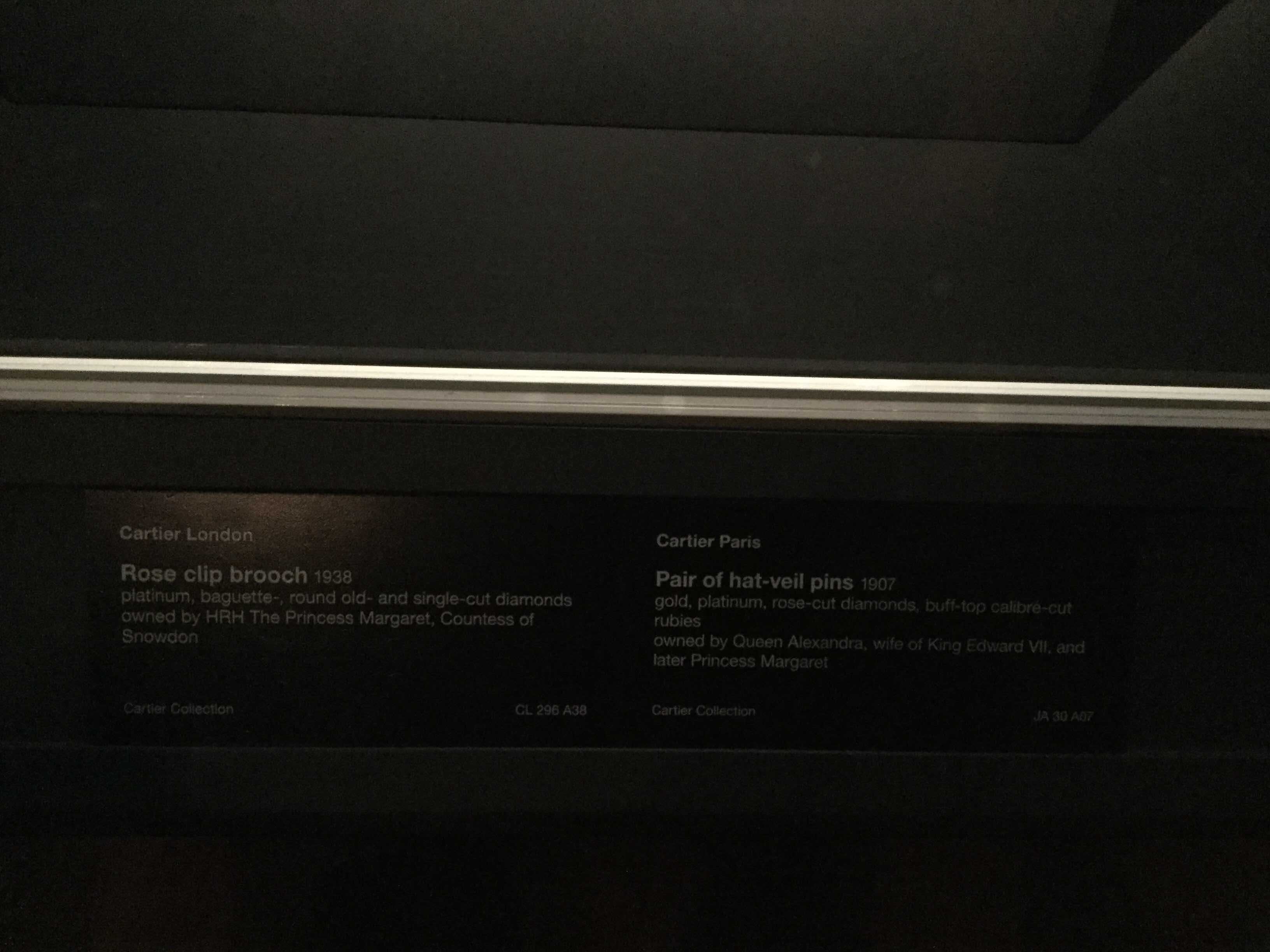 Grace Kelly was a Hollywood actress that married the Prince of Monaco. Some of her Cartier jewellery was in the exhibition, including two tiaras and her engagement ring that she wore in the movie “High Society”. 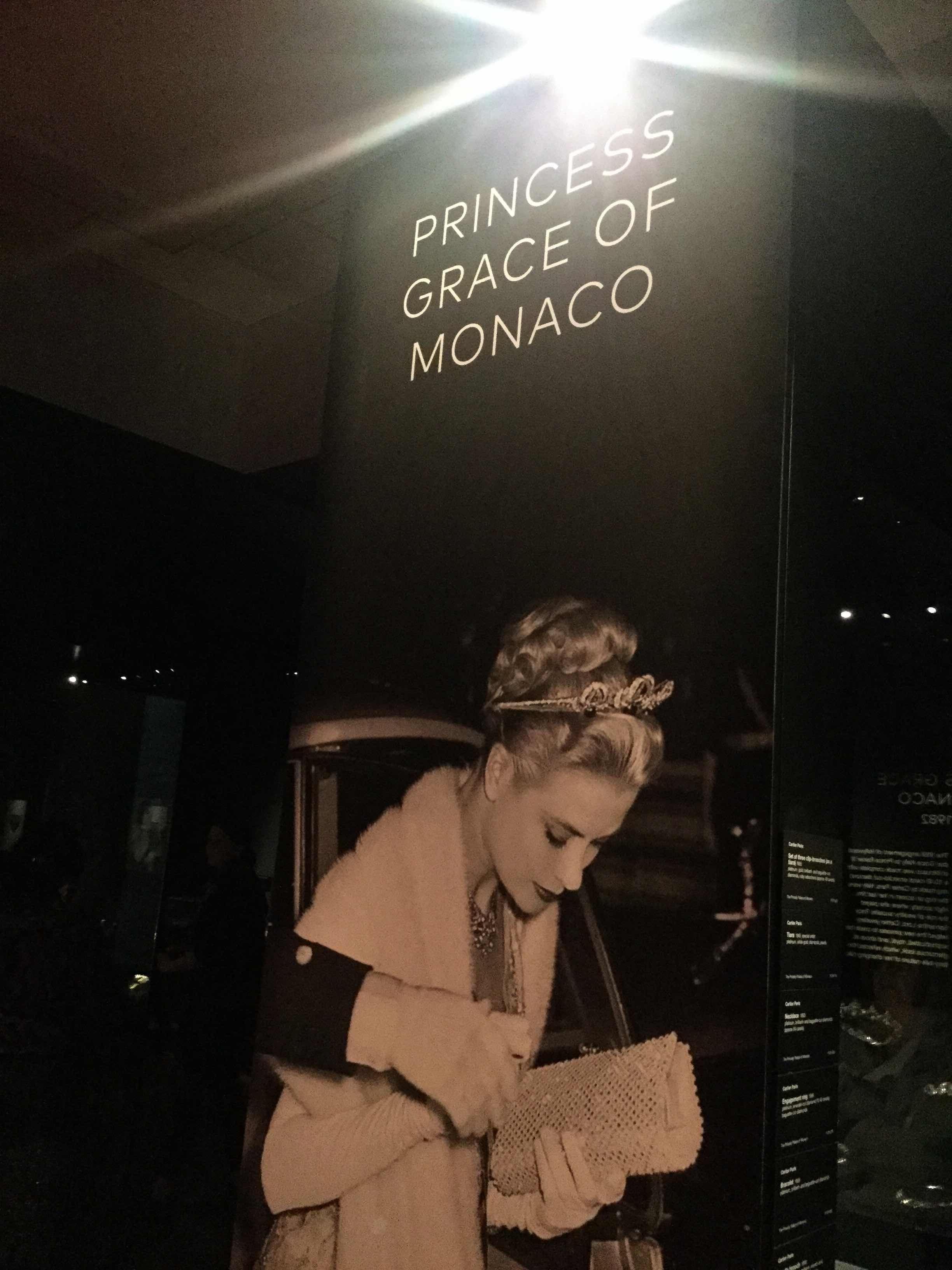 When I was a young woman, I really admired Grace Kelly’s beauty and ladylike behaviour. I had a coffee table book on her, that I pored over. She really embodied the name Grace.

Princess Grace’s son remembered playing with his mother’s poodle brooch when he was a very young boy: 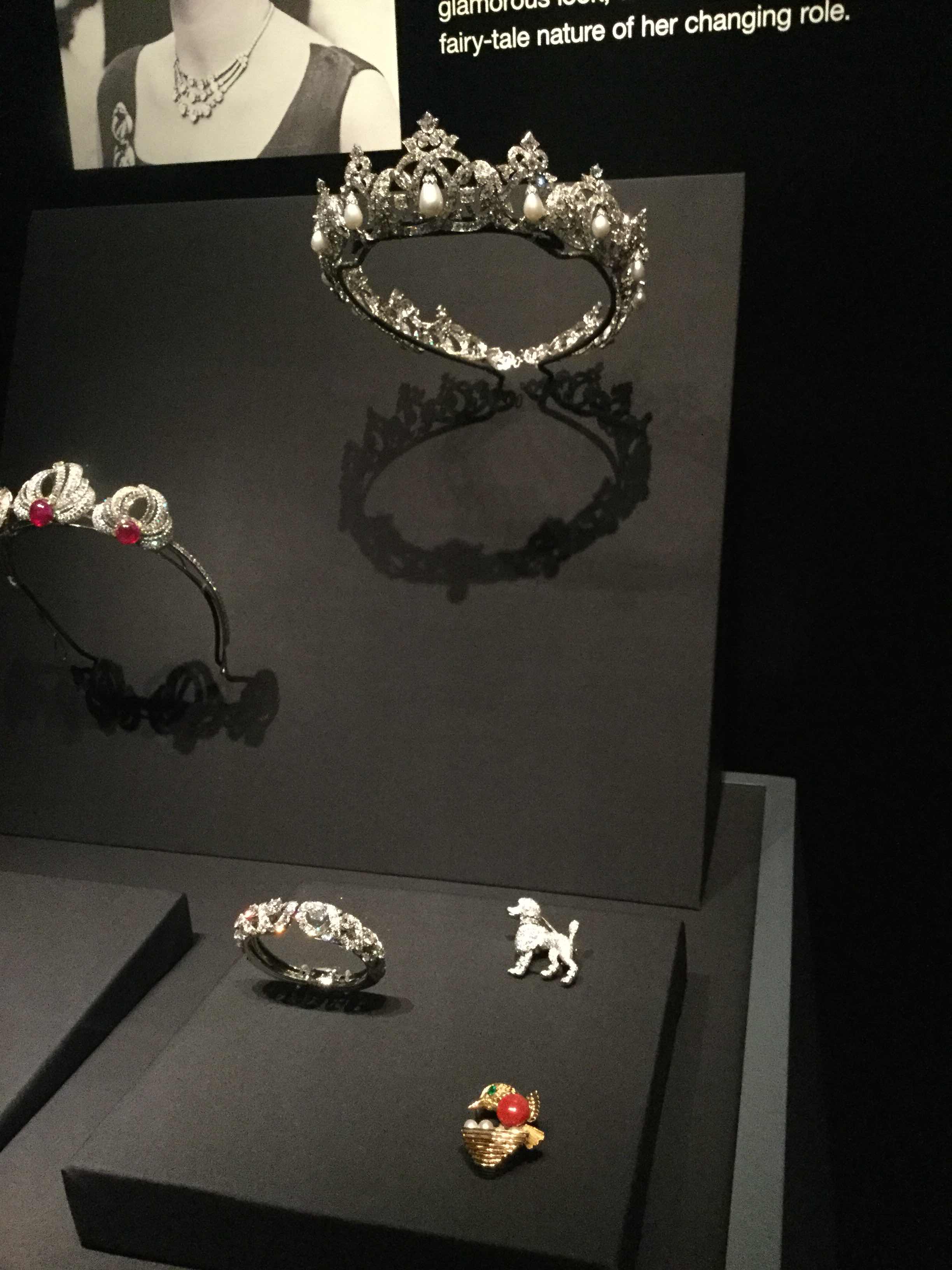 “It was the most wonderful diamond I have ever seen. Most diamonds I think look just cold and icy but the thing about this one was the colors in it.” –Celeste Holm, Grace Kelly’s (1929-1982) co-star in High Society, on Kelly’s Cartier engagement ring. 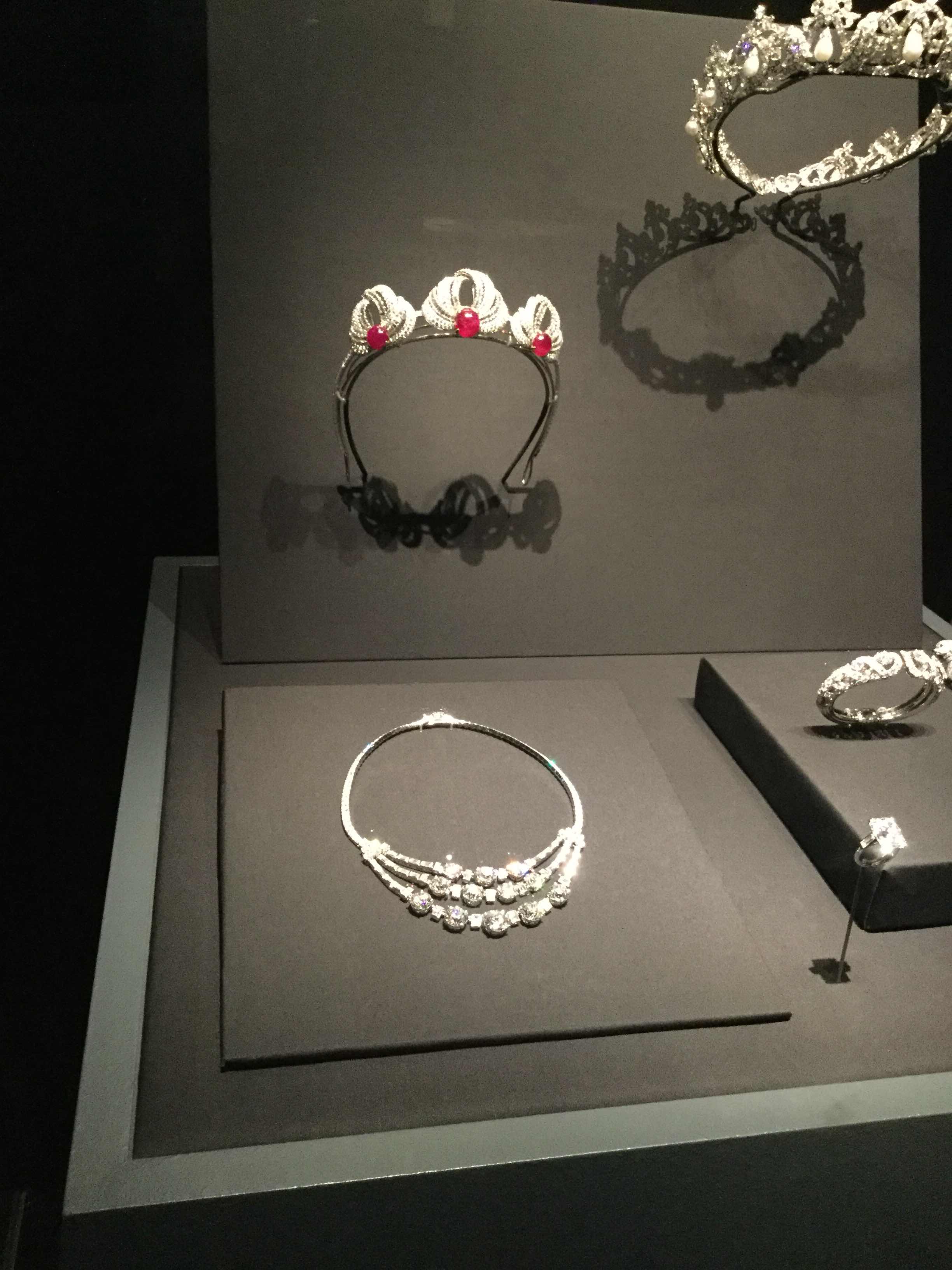 Wearing her diamond engagement ring being serenaded by Frank Sinatra in High Society:

Of course most of the money the Monaco royal family had was made from the gambling industry and the tourism attached to that. 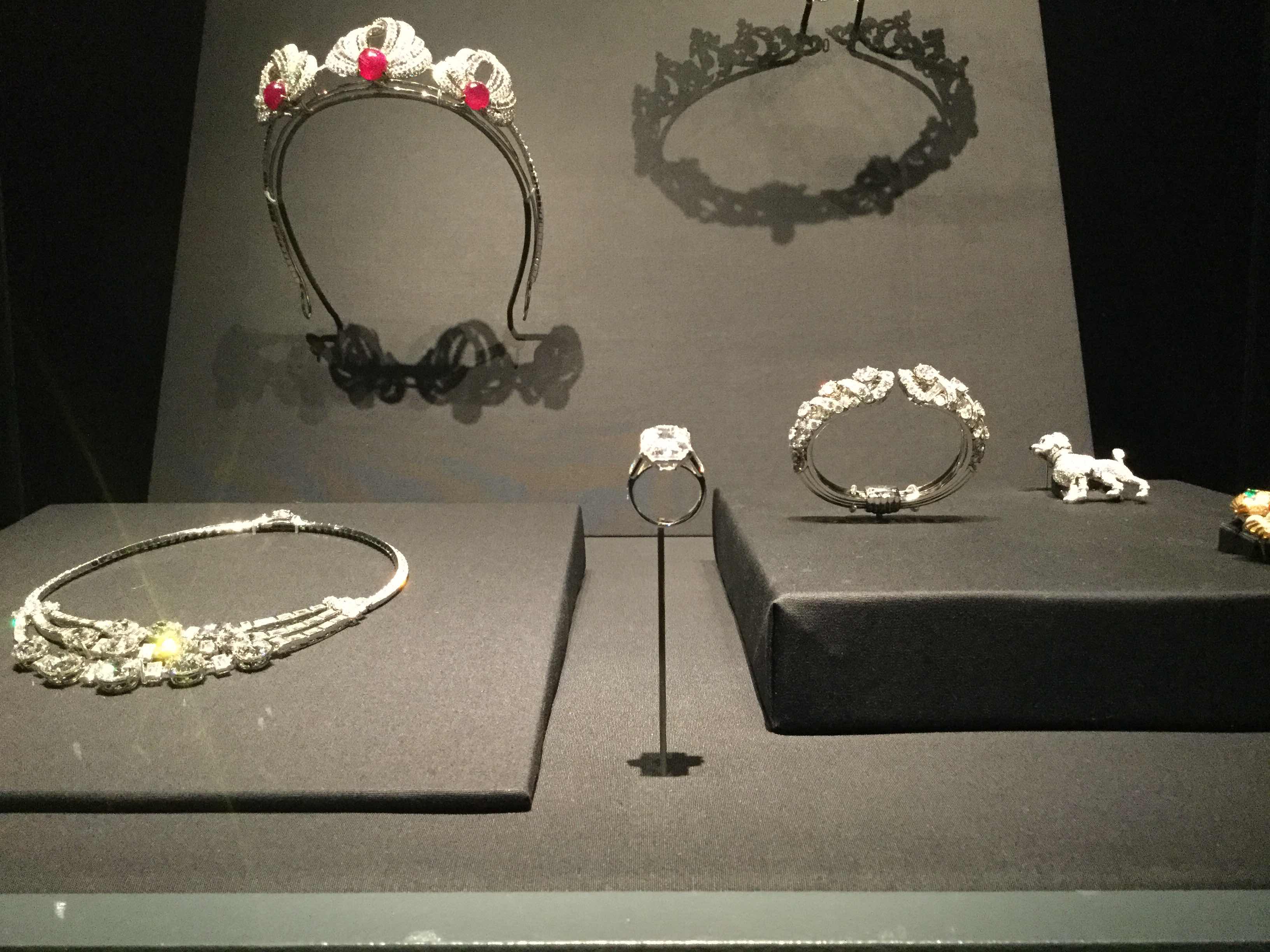 And of course I had to get one with Acerules so she would remember she saw them in years to come. She is always my Princess. 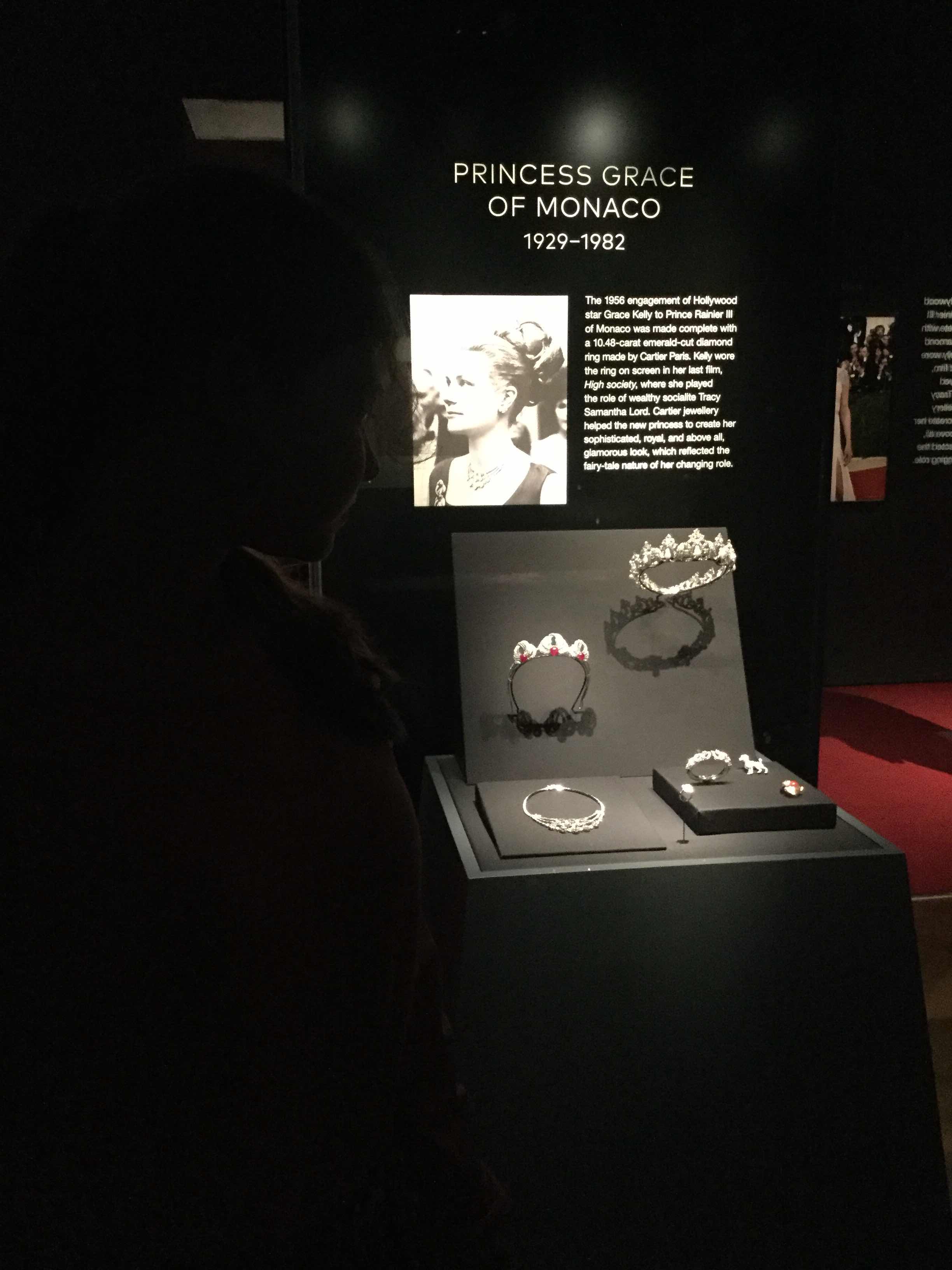 The donor of the pink diamond made into the Queen’s flower brooch:

Queen Elizabeth’s wedding present necklace on display at the exhibition:

The Nizam of Hyderabad necklace by Cartier

Who was the fabulously wealthy Nizam, really?

Who was the last Nizam?

Grace Kelly engagement ring and tiara on display at the exhibition:

I don't remember much of Queen Elizabeth II's coronation; just a snatch of newsreel footage (with Prince Charles, as I remember, charming everyone by bouncing his hand up and down on a knot of the balcony drapery), and the awareness that this was a very big deal indeed. I remember Princess Grace's romance and wedding far better. It had a unique kind of magic, because of who she was. She was not just any movie star. She was Grace Kelly. Something about her hardly credible perfect beauty and elegant, restrained aura made her very special -- especially combined with her very considerable talent as an actress. I think it is largely forgotten that she won an Oscar for A Country Girl in 1956. Never mind we know now that she was not as, um, well-behaved as she looked in her bachelor girl days. She created an image of perfection that one could never forget.

I would have loved to see the royal jewels. They have such a history. Recently I watched footage (quite a bit of footage) of the coronation in a celebration special. What a historical event. I think Princess Margaret's wedding was the first wedding I ever saw (on TV, of course!). Oh, and Grace Kelly! She remains one of my favorites. I'm so glad you shared the clip from High Society -- one of my favorites, along with Rear Window. And a Royal Night Out -- I liked that one, too. What a fun exhibit and nice post.

Thanks Rina and Jeanie!