A person discussed in this blog post I’m recapping today, is having a birthday this week. Without permission, I won’t say who, unless she identifies herself. She’s a brilliant and caring person. Please read it and be sure to come back here, because there’s more.
recap of Walk the Walk
Happy Birthday Friend.
Speaking of persons who Walk the Walk, that is, live what they espouse, an Australian man, filmmaker, James Ricketson, 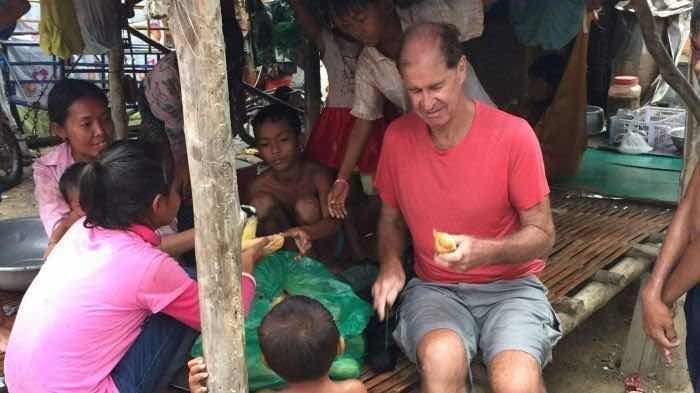 was today, in a Cambodian court, convicted on trumped up charges of espionage for an unnamed country. He was sentenced to six years in a Cambodian prison without mattresses, or other basic necessities. He’s already done one year, since he allegedly flew a drone over an opposition rally (the opposition party were then outlawed before the Cambodian election.)
I signed a petition to the Australian Foreign Minister, some months ago , asking her to get him out of jail, our government didn’t even have the grace to publically say he wasn’t a spy! Ricketson has had a career as a filmmaker, the great director Peter Weir testified for him in court this week. He also lived among poor people in Cambodia and told their stories. He loved them, and maybe now he will die for them, because his health has been getting dangerously bad in jail. His family believe he will not survive six more years there.
I will say this. The Cambodian government needs to know they are creating an Australian martyr. That is a really bad idea. Australian journalists that were murdered in Indonesia went down in history here, we did not forget, decades later we still keep their memories alive.
Journalists, writers, filmmakers, playwriters, artists, musicians, comedians are the eyes, ears and mouthpieces of the world and embarrassing to some governments. But there is something worse for those governments, making those people into martyrs by killing them.The legend of good, principled people outlasts their murders. Please, if you care about human rights, sign the petition for Ricketson to be freed, below.
BBC article about James Ricketson
Please, please sign this petition to the Australian foreign minister, read about the conditions Ricketson is slowly dying in:
change.org petition by his daughter
Posted by Running on empty at 02:10

My sincere thanks, Rina. Reading the updates of his frustrated daughter on the petition, I feel an interest now, and today I just cried a little and prayed when I heard the “guilty” verdict.

Our government has been so busy fighting in their own party, they let this good man down. They are not doing their duty. I hope the new foreign minister will act, but I fear we just need to vote them out first, that is what is needed, they are very uncaring, IMO.

Journalism is in a peck of a mess these days -- too many people want to take down good journalists who are trying against all odds to get the truth out there. I wish him well in his release. And all trying to report the news.

inhumane, immoral and a slur to people who make a difference in the lives of the less fortunate on this planet, this can only be political and show their contempt for humanity, signed and commented.

I wish him all possible strength and peace to endure this new stage of his ordeal, and please will the Australian government step up to its responsibilities to a good man and citizen of Australia!

James Ricketson has decided not to appeal his conviction -he had less than 25 days to go before the cut off to appeal. He has decided to ask for a Royal Pardon, ask for clemency, and the new Australian Foreign Minister has announced they will support him in this: