We don't "burn off" often, preferring to compost garden waste. I don't breathe well with smoke, it's bad for the neighbours' washing on the line, and bad for the environment. Every Summer here it's also illegal without a permit, in case of bushfires. However, on the rare occasion that I let my hubby have his backyard fire, I get the charcoal left over for our garden. Old gardeners say, in small quantities, it "sweetens the soil."

No doubt, Reader, you've heard about Ash Wednesday. It's the first day of Lent, the day after Shrove Tuesday, (Pancake day in Australia), yes? Well, many Christians go to church on Ash Wednesday, and receive a cross on their foreheads, made of powdered ash. It is meant to remind us of our mortality.

" Ash Wednesday marks the start of a 40-day period which is an allusion to the separation of Jesus in the desert to fast and pray. During this time he was   tempted ."  Wikipedia.

"One of the major attractions of Mount Macedon (Vic)  is the 21-metre (69 ft) high memorial cross which stands near the summit of the mountain. This structure was established by early resident William Cameron in 1935 as a memorial to his son and those who died in World War 1." Wikipedia.

This huge white cross on the summit was left standing while all the trees burned around it in February 1983. It was the famous AshWednesday fires. Multiple places around Victoria and South Australia burned in the fierce bushfires that followed a bad drought, then a dust storm. Records were set for lives lost and property destroyed. 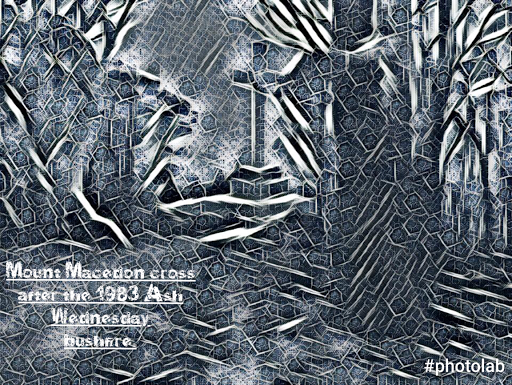 I was in my late teens working in a nursing home for old nuns. First the washing on the line was covered in brown dust. Then days later, one of our nurses had to take time off to make sandwiches at a bushfire shelter, as she lived near the fires. We followed the fires on the TV, and the nuns prayed. When the appeals came, we were set to scouring the home for items to donate, including spare walking frames, blankets etc. it made a big impression on my young mind, so,I read up about the fires and have been studying bushfires ever since.

The question posed at the end of the video, made in the 1990s, was, "the question is, will we be better prepared next time. " The answer is, no, we weren't. Black Saturday in 2009 brought even greater loss of life.

I just watched a long documentary on the Black Saturday bushfires in 2009 and can truly understand why you're so vigilant Cath. I couldn't believe how critically bad the alerts were to those poor towns and villages. Also that most of them were reported as being started deliberately! Terrifying.


Yes, for sure. I started a Black Saturday post the other day, that I will post when finished. I saved all the newspapers from that week. It was very severe.