I CHASED A LITTLE MOUSE UNDER HER CHAIR

" The origins of the nursery rhyme "Pussycat pussycat"!


The origins of the "Pussycat pussycat" rhyme dates back to the history of 16th century Tudor England. One of the waiting ladies of Queen Elizabeth Ist had an old cat which roamed throughout Windsor castle. On one particular occasion the cat ran beneath the throne where its tail brushed against the Queen's foot, startling her. Luckily 'Good Queen Bess' had a sense of humour and decreed that the cat could wander about the throne room, on condition it kept it free of mice!

Pussycat Pussycat poem
"Pussycat pussycat, where have you been?"


"I've been up to London to visit the Queen."
"Pussycat pussycat, what did you there?"
"I frightened a little mouse under her chair"
"MEOWW!" 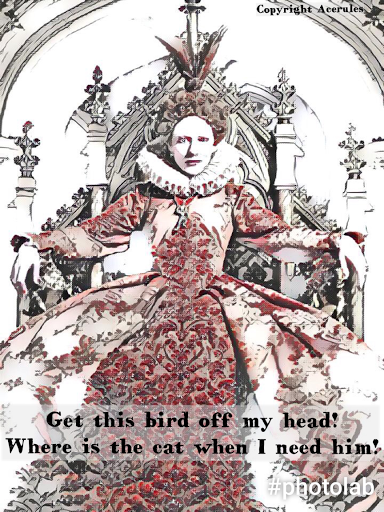 I'm interested to read that, because I always presumed the rhyme referred to Queen Victoria.

So, it turns out that the City Hall of London has a mice problem. The Lord Mayor has been advised to adopt a cat. Proponents have pointed out that other government buildings have cats.

"Andrew Boff, a Conservative member of the London Assembly, said: “I’m fully in favour of this idea and in fact I’d go a step further and recommend a cat for each political group to give it real cross purr-ty support. The problem here, however, is that, as is well known, cats are mostly Tory.” " The Telegraph.

We bought our older cat, a pretty grey puss, when we were living in a townhouse in a complex next to vacant land. I noticed we had a mouse in the house, then realised why many of the other townhouses had cats sitting in their windows. When I walked past the pet shop window this kitten looked at me with her expressive green eyes. We got urgent permission from the landlord, either the cat, or rodent eradication at his expense, and we still have her more than a decade since. She has survived many house moves,  catfights, some nights out, unexplained disappearances, and the acquisition of dogs. The birds have learned to avoid her, though she caught some in her younger years.

More recently I decided that she wouldn't last many more years, and her next role should be to train up a new mouser. So we procured younger cat as a kitten. She is grey with markings, and a big personality. Before her was Bella kitten, beloved but too bold. She would follow us all the way to the shops. She was hit by a car, and we were devestated.

Having two cats and two Jack Russell dogs means I havn't seen a rodent in a long time, despite us having grain out for the poultry and rabbit. Perhaps they have hitched a ride on one of the trucks that rumble through here, to our shire Town Hall.

" The mice have certainly given us paws for thought”.  The Lord Mayor's office. The Telegraph
The original article:
The Telegraph cat and mouse story link

Those little mice are amazing...It is hard to believe the can learn all those tricks. My dog would do any trick for treats. Now that she is old she can't roll over and do everything but she will bark for her treats. She will even willingly go in her cage if we give her one. I think she lives for those treats. I know a lot of people that live in the country especially keep a cat to keep away rodents. I saw our front porch light was on tonight and went outside to take the dog out and I could smell a skunk...I wonder if they are out because it is so warm..it was 64 today. That is almost unheard of here in the middle of winter..


I hope you got videos of your doggy doing her tricks!

We don't have native animals around our street much, just birds. We are near the fields but not "the bush", which is being regenerated further into the town. If I lived near a national park or other native bush I couldn't have cats, or would have to keep them in an enclosure. As it is, we bring them in at night, as per town council regulations.