Here we go.  There was a TV debate recently called Q & A on ABC TV, which hosted, among others, Jacqui Lambie, an Independent Senator from Tasmania, Australia, who is opposed to the public wearing of burquas, and also Sharia law; and a Muslim spokesperson, Yassmin Abdel-Magied. The debate on Sharia law got to shouting point. I have no problem with the debate topic being brought up, who was debating, or how loud it got. I have lived among Muslims and among anti Muslims and think these things should be debated. Speech is good. Violence and breaking the law is not good. The law of Australia, that is - separation of church and state.
L to R- Yassmin Abdel-Magied and Jacqui Lambie. 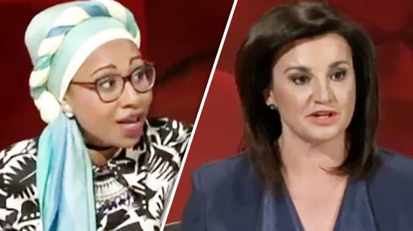 I would like to point out that when men raise their voices in a debate on tv, or in the boardroom, it's considered a normal way to cut in to make your point. If women do it, such as on this TV debate, it's considered newsworthy. Shame on the double standards!
In the interests of full disclosure, I admit that I signed all opposing petitions , below, at the end of this post, so I could get the share links without, hopefully, my name appearing on them. As always, the comments are interesting. A full and robust debate going on.
I am pro religious tolerance. I am not pro sharia law in the West. Left leaning people should research it, from reputable sources, before they support it. They may find that aspects are incompatible with their own beliefs. I find the Muslim religion to be conservative.
There is not just one Muslim denomination, just like there is not just one Christian one. Then there are Muslim countries that impose sharia law, and some that do not. So one person's fact can be another person's fallacy.

Comments on both sides of the topic of sharia law are welcome beneath this blogpost. If you wish you can use anonymous. Comments that insult other posters personally will be deleted, according to the Blogspot rules.
All screenshots are from Change.com, from the pro Sharia law publicity petition:

Geepers! Jacqui Lambie was not only born in Australia, but traces her family tree  back to Tasmanian aboriginals. 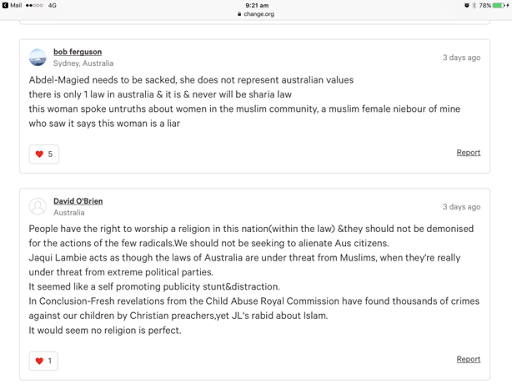 Comments on both sides are welcome beneath my blogpost. If you wish you can use anonymous. Comments that insult other people personally will be deleted, according to the Blogspot rules.
Numbers below were at time of posting and may be higher when you read this.

pro a new debate petition
Posted by Running on empty at 17:18

Not being religious I don't condone or condemn anyone for following their religious beliefs, but I do object strongly to it becoming a political battleground. Religion is faith based and if you happen to believe in one, that's fine, but to me it's something ethereal and not evidence based and I'm irritated by hard liners who think their beliefs should be imposed on anyone. It's a private and personal thought process and in the same way that I would never expect to impose my atheist views on a believer, I expect the same courtesy from someone who follows a religion. Interestingly, as an atheist perhaps I should object to the fact that atheism isn't taught in schools because one could say that it would be the natural path of having no indoctrination into any religion. When my son started school I told him the bible was a book full of stories that people had to chose to either believe or not. This was because I was annoyed that he was being taught them as fact. In his school report his teacher commented that he had VERY STRANGE VIEWS ON RELIGION. I took exception to this because frankly they are not strange, they are just very honest.
As far as one religion taking over the predominant one in any country is concerned, I would say it's disgraceful as religion is surely about tolerance and believing in our better qualities? If a religion is being used to create friction, wars and hatred, it's a sorry excuse for the complete opposite of what I'm sure the religion is trying to promote, so shame on those people.
Sharia law is not something I'm in any way qualified to comment on but the impression I have, especially in regard to women, is a world away from my own mindset. If you are resident in any country you should abide by the laws of that land. For me it is frankly extremely arrogant to expect anything else, let alone think it's justifiable to get the country to make allowances for them and/or impose them on others.


It's odd that your son was taught religion if you're an atheist. In New South Wales State schools, we had to sign a form each year that was opt in/out of religion classes. (Also in Victoria until recently. ) In NSW,my kids attended very large schools so there was a choice of denominations RE classes they could attend. Parents could arrange to set one up if they wanted their religion represented. Then there was the opt out class where children went if the parents didn't want them learning religion. They would do activities to keep them busy or watch a video such as Disney. The RE time slot was for 30-35 minutes per week. When I was a volunteer reading teacher at one, I made enquiries and was told that due to separation of church and state I couldn't hand out invitations at school to a Communion /Confirmation ceremony and party . The way I looked at it was that thus my children were not being influenced to join a religion that I did not like, either.
When we moved to a small country town the religion classes were taught by a roster of different denominations, as schools were so small.

In Victoria a couple of years ago, RE classes in State schools were abolished altogether. Atheist and other concerned parents objected to the loss of 30-35 mins per week from the curriculum. They also pointed to the (rare) case of evangelising material being given out at the school gate etc. Inour town here at the state school a teacher was allegedly sacked for evangelising. She moved on to teach at a religious school. I have heard her evangelise to a captive audience on the public bus, whoever she can strike up a conversation with.


The above should read "when I was a volunteer reading teacher at one school". I was not a religion teacher,as I felt my own conduct in my life wasn't good enough to allow me to preach in public.

I'm not sure how religion is taught in our schools nowadays, but I don't like the idea of it being abolished altogether because I think everyone should have the chance to make their own choice in what they believe. It should never be done in a radical or draconian way though because that's just playing and preying on vunarable young minds. When I was growing up I always thought that 'real life lessons' and psychology would have been far more interesting and pertinent and felt that putting a God in the mix corrupted the message because I couldn't make a real connection. We did have one really good RE teacher though who never spoke about religion perse but just focused on things like drugs, temptation, fun, respect and humour. We all loved him and that's why still to this day I believe that giving kids the chance to just talk about the basics in life is vitally important. I wish they'd just teach it as morality and positivity lessons. I don't think I was ever cut out to be religious because I remember sitting at Sunday school feeling it was all weird. I didn't know why, I just didn't like it. God seemed remote and quite scary to me as a child and I complained until my Mum said I didn't have to go anymore. For me I just don't know why we need Gods to promote goodness and common sense. Life mostly gets most of us on the right track most of the time all by it's self. Having said that, I do still like the concept of Gods purely on a 'it's good to be in a world where it's part of the human experience if you want it to be' basis.


Interesting to see the relative increases in numbers in the three petitions in the article above. The one calling for a new debate seems to be increasing the fastest, unless I'm counting wrong.

I would oppose further debate. The days of altering law to suit any religion is firmly behind us and long may it remain so. We'll be going back to chopping off heads next like Henry 8th! That may sound facetious but yes we did used to do it and no I don't think society needs any more radical punishments or wildly different treatments of women ever. I appreciate my rights as a women being equal now and thank all the courageous women who fought so very hard to get us where we are today.


I just went to Google to get my facts straight about whether ISIS really do behead Christians and others they disagree with. Pages of videos.... and making children perform the act , too! Oh my Lord.

Think they're quite keen on stoning women to death too. Saw a factual film on it not long ago. It was horrendous and brought about by the husband who'd falsely accused his wife of having an affair so he marry a young girl. He made the son throw stones too. It can takes hours and hours for death to occur. Oh my lord indeed!


It appears that Sharia law is operating freely in Germany, in defiance of German law, a very good article


Update, ABC in Australia has taken the following action