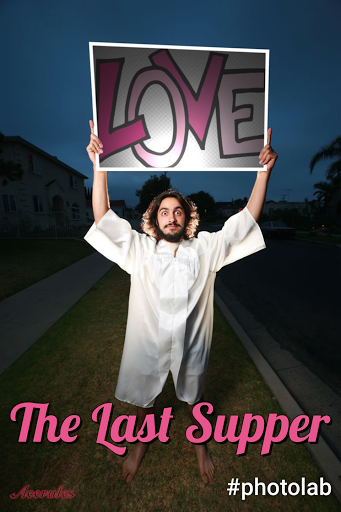 This song is dance music, perfect if you are doing the housework or have some space to dance around.

7 Then came the day of Unleavened Bread on which the Passover lamb had to be sacrificed. 8 Jesus sent Peter and John, saying, “Go and make preparations for us to eat the Passover.”
9 “Where do you want us to prepare for it?” they asked.
10 He replied, “As you enter the city, a man carrying a jar of water will meet you. Follow him to the house that he enters, 11 and say to the owner of the house, ‘The Teacher asks: Where is the guest room, where I may eat the Passover with my disciples?’ 12 He will show you a large room upstairs, all furnished. Make preparations there.”
13 They left and found things just as Jesus had told them. So they prepared the Passover.

"31 “Simon, Simon, Satan has asked to sift all of you as wheat. 32 But I have prayed for you, Simon, that your faith may not fail. And when you have turned back, strengthen your brothers.”
33 But he replied, “Lord, I am ready to go with you to prison and to death.”
34 Jesus answered, “I tell you, Peter, before the rooster crows today, you will deny three times that you know me.” 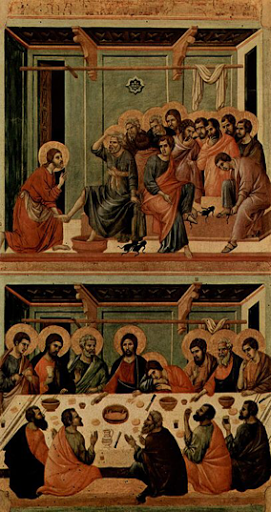 How did Jesus show his love toward his friends? How did he simultaneously teach them to be leaders who personified service, not arrogance? (Couldn't we all do with a few more of those?)
He, the guest of honour,  got down on the floor like a servant of those days, and washed their feet. People in those days wore sandals and roads were not sealed with tar. Unless carried around in a litter, or on a donkey, everyone's feet were dirty. I get that, as I go barefoot alot, even in Winter.  It was custom that a low status person of the household would wash the guests' feet.
Peter protested.

8 “No,” said Peter, “you shall never wash my feet.”
Jesus answered, “Unless I wash you, you have no part with me.”
9 “Then, Lord,” Simon Peter replied, “not just my feet but my hands and my head as well!”
NIV Bible

There is a custom in the churches to commemorate this scene by acting it out, every year on Holy Thursday. The priest or minister washes the feet of parishioners. One time I was watching this, as the priest worked his way down the aisles to selected people. They already had off their shoes. This man, Rev father John Alt, was on his knees with his head bowed, performing the ritual, when I suddenly had a very strong premonition that this was a holy man. I can't explain it.
What I do know for sure, is that he was very good to my first husband during his illness. After the death, I offered the man a sum of money for his help. He would not take it. He only accepted a valuable painting of St Mary McKillop for the church, and a cheap folding chair, that had been my husband's.
I know that there are TV evangelists who get around in private planes, luxury boats, and own multiple houses. I think they missed the point of the washing of the feet, somehow.

Unselfish service to our fellow man or woman, is what love is.

LOVE IS SOMETHING YOU DO.

I have a friend who has trouble saying "I love you. " However, this person looks after their family with loving care. They lecture me with advice. That is their love language.

I remember a bit of a sermon years ago. The priest said, "Its not enough to be holy in the church, when you go out those doors, watch how you behave toward the other drivers in the car park. " or something like that.
The message of the Last Supper, as given to Peter and the other disciples, is that God loves us, and we should love each other.  Some churches get all caught up in the wording of prayers, or the colour of robes, or some people in the pews not being "quite right" . But we are all commanded to love one another, it is that simple. Because, as I taught my children from when they were babies, God loves every one of us in the world. If we stuff up, he gets sad, but he still loves us, all of us, those who know about him, those who don't, those who forgot, and most of all, those who come back to his loving arms. Our part? He wants us to love our neighbour as ourselves. Every major world religion has some version of that in their creed. Treat the other guy, how you want him to treat you.
Now if the world could just apply that, there would be peace.
That, in the time of the Roman Empire, was a Radical New Concept. They had the Pax Romana, or Roman Peace, that was based on fear.

There, in the upper room with his beloved friends, Jesus said to them:

lyrics of You are Beloved
Posted by Running on empty at 01:05

Email ThisBlogThis!Share to TwitterShare to FacebookShare to Pinterest
Labels: Father John Alt, Jesus, Passover, Simon peter, the last supper, the washing of the feet, TV evangelists, what is love? love one another as I have loved you

Perhaps your friend doesn't feel it. Or maybe just has trouble saying it and being vulnerable. Either way, as you say, people like this can still be of some help. In fact some who say it are of less help.


All very true, Dan. I revealed somewhere, that my parents never said it to me. I was very well looked after, but not emotionally. I decided never to be that way. My daughter gets told all the time. After I revealed it, a few of my friends said the same, they had never been told.

I never remember my parents saying they loved me...yet I know they did...somehow I equated the trips and toys and food, etc with love. They tried to give me a better life than they had and they told me so. I am not the most demonstrative person but I do manage to tell my kids I love them and I try to prove it by being there when they need me. Love is so much more than words as we all find out when we become adults but a child needs verbal support. The book The Five Love Languages is quite an eye opener. We all need to have our love tank filled and you can tell what each person needs by observing their behavior. My husband shows his love by service to others....lol....sometimes it is very annoying to me but I try to do favors for him in return as that is what he needs to fill his tank...Mine is quality family time....that is precious to me. I recommend that book to everyone...


Yes, Kathy that was a bestselling book.

So many people get no love in life. It's good if we all can "pay it forward" and just be randomly kind.