The following post, and pictures, were written by and contributed, by Fizzfan of Britain.
(The secondlast video is not for children. )

Once upon a time a long long time ago, I had a brush with the law that I'm now sure should have made a headline scoop in our local newspaper.

Granted it wasn't News At Ten standard, but when you see some of the other news reported below I do feel a bit peeved my story wasn't given the press coverage it seemingly deserved.

I can't be sure of the time or day, but the  'incident' arose while I was on the phone having a chat with a male chum called Jem.

We'd met the previous weekend for a catch up with others, and done the usual rounds of pubs and clubs and busting of moves on dance floors, and at some point I'd regaled everyone with the hi-light of my week which had been that I'd been burgled.

I don't think it would have given Kim Kardashian a run for her money, but it was a bit unusual inasmuch as I'd been in my flat at the time it took place.

I suppose that has the potential to be quite newsworthy and scary, but in truth I was just having a snooze on a Sunday afternoon on the lounge sofa, and the dirty deed had been done right under my nose before I'd had time to rally from my post Saturday night hangover fug.

He'd made off with the telephone kitty pot and my purse, and I was left scratching my head at the nerve of it all and being thankful for my delayed reaction in going to investigate the strange noises.

Anyway, getting back to the 'incident', there I was merrily chatting away about nonsenses and probably making arrangements for the weekend to come, when I suddenly caught a movement out of the corner of my eye and was catapulted into a state of shrieking terror as I recognised the furry presence of a mouse speeding across the landing.

I know I screamed, and I know Jem shouted "What the hells going on!" to which I shrieked "It's a mouse!" and he said something like "WTF!!!" and in my panic I just shouted "Ahhh, I've Got To Go!" and slammed the phone down in order to greet my flat mate who'd just come rushing out to see what all the commotion was about.

We then proceeded to have an emergency huddle standing on the kitchen chairs to discuss all things rodent related and how best to tackle our new rogue resident.

I'm not sure to what stage of its planned demise we'd gotten, but from our vantage point we could clearly see out onto the road below and our attention was suddenly diverted to the strange sight of two vehicles, one of them being a panda car, screeching to a halt outside my flat. We then watched as Jem flew out of one of them and bounded across the road in his socks to hammer on our downstairs door, closely followed by two police officers from the other.

All I can remember thinking is 'Why is Jem in his socks?' and 'Police?' and 'What?' at the same time as being compelled to answer the thunderously urgent banging on the door.......

So with a very weirdly baffled expression fixed firmly on my face, I did just that.

On opening the door there followed an exchange something along the lines of....

In brief it seemed that being on the end of a phone to someone who suddenly erupts into hysterical screams and then slams the phone down is quite alarming, and Jem had thrown on his super hero cape to burn some rubber racing to my rescue. He'd happened to pass a police car en route and flagged them down to accompany him on his urgent mission, and even sacrificed putting on his shoes to save on what could have been precious life saving seconds.

"You said there was a bloody man in the house!"

He'd kind of understandably leapt to the conclusion that my burglar had been paying me a return visit.

I THINK THIS MIGHT HAVE BEEN A GOOD HEADLINE AND THIS IS WHAT THE POLICEWOMEN SAID.... 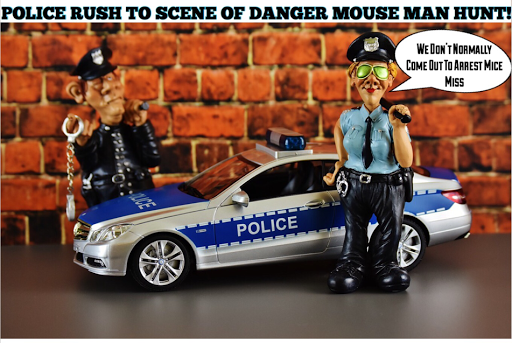 HERE'S SOME MORE HISTORIC NEWS OF A SIMILAR NOTEWORTHY CALIBRE

This is a very recent news story that really made me chuckle and hate myself at the same time:-

A little girl became concerned that her pet hamster hadn't moved in its cage for a couple of days, so she took him to the vets.

The vet removed the hamster from the cage and it started to move about, eat and drink, without any problems.

When the vet asked if anything had happened to it over the previous days the girl remembered it had escaped and gone under the fridge.

This didn't seem of much significance until the vet took a closer look and found the hamster had something in its cheek pouches. A fridge magnet.

It seems the hamster had been unable to free itself from the side of wire cage due to the generated force field.

This made the national tabloid press and I'm kinda glad it did because I laughed but then immediately felt awful at the thought of the poor little guy sitting there glued to the spot for what must have seemed like an eternity. Awwww. 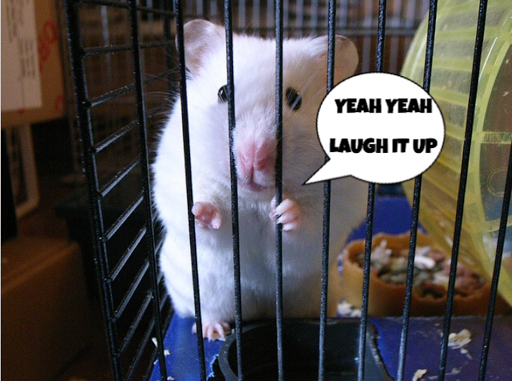 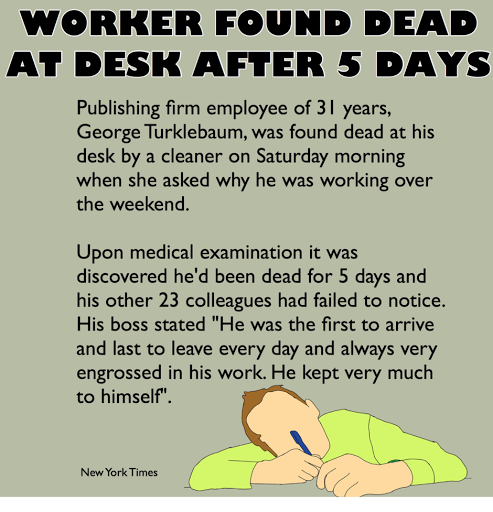 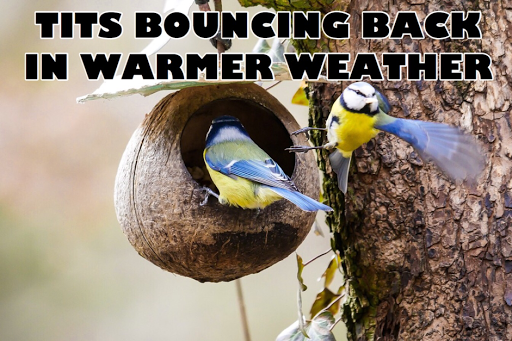 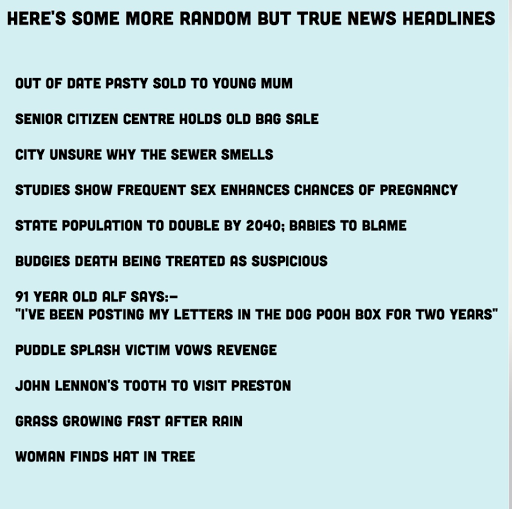 Police officers were called into action over an “illegal” rubber duck race which  disrupted the residents peace in a Gloucestershire village.

The charity event was to raise money forBlood Bikes which offer a free blood and medical equipment delivery service to NHS facilities.

Embarrassed Officers were left no option but to swoop into action and threaten to arrest the organisers if the event wasn’t shut down.

A bystander remarked, "I have to say it soured the whole day. Talk about using a sledgehammer to crack a nut. It was like something out of the film Hot Fuzz. Surely the police have better things to do than stop rubber duck races."

However some local residents were not in agreement, with one stating "It is frankly unfair to expect villagers to put up with such nonsense from these undesirables who ruinour peace and quiet and then accuse us of being kill-joys!" 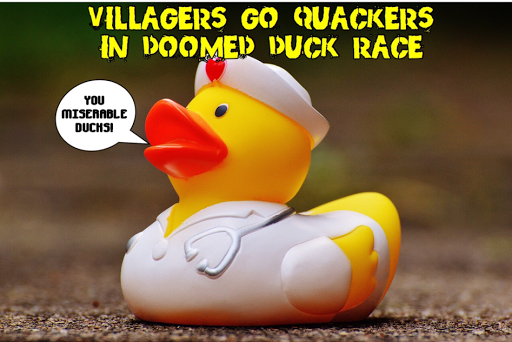 ANYWAY HERE'S A COMPILATION OF SOME BEST BITS FROM A BRITISH SHOW CALLED 'GOOD MORNING' WHERE FUN N LAUGHTER HAS ALSO 'RUINED' THINGS IN THE MOST MARVELLOUS WAY.

Thanks Fizz for the toe tapping song and laughs....I agree, your story should have made the news..lol

End song should have been about Media corruption and Jeremy Corbyn.
If anyone wants a listen this is the link. I thought it was pretty genius....

That video is hilarious....I have a hard time understanding everything they are saying with their British accent but they laugh so hard it is impossible not to laugh with them.
The utube doesn't work for me....maybe I can find it on utube.