I love Billy Joel's work, as a pianist myself, and ex music teacher. He was classically trained. In coming posts I will use his music , as I will be dealing with the 1980s.
This theme is not one of those, it's a contemporary one, though the song is circa 1978. The lyrics are cutting, and being rather timeless, still cutting edge, apparently the piano riff was inspired by a sushi chef chopping, fast, as they do.

All of us wear masks from time to time, unless a person has a brain disability and loses /never learns their inhibitions. Young children also tend to be uncontrived until they learn to lie.

Occasionally, though, you come across someone to whom the mask is essential, a hiding place for them, and a bait for you. It doesn't come off in private until you're in so deep you're invested already. Then they start to fillet you.

When you do get thrown back, and start to swim away, they put the mask back on and reel you in once more, to do it all over again, and again. 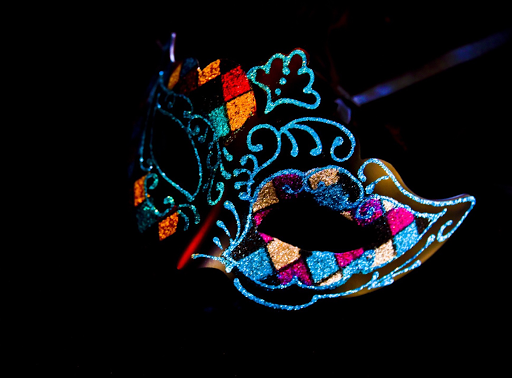 They've been doing it for so long, almost their whole life, they're exquisitely beautiful at it. Quite fascinating to watch, infinitely pleasurable to experience. You make that suicide leap into the boat and submit to be gutted. That's when you realise, abruptly, that the pleasure's not going to be infinite, though the cycle may well be.

It's now a modern world of dating apps, where filters seem to be accepted for profile photos (I don't see the point, seems a bit like stuffing padding in your underwear, surely you're going to be found out if things go well?) People can misrepresent themselves in all kinds of ways, though, appearance being the least problematic.

So how does one figure out if the prospect has a mask on? Are they Jekyll and Hyde? Well I think the old adage goes "if it seems too good to be true it probably is."

Don't send that money to Nigeria.

I liked the padding comparison, simply because it's a creative simile.

I'm also glad that you touched on the necessity of the mask. It seems to be a destructive crutch, which might be needed when there is an absence of an ability to feel certain emotions and to therefore exchange a form of love that is emotionally underpinned.

Unless and inevitably until, the mask-wearer possesses a higher level of self-awareness, we may find them repeating the seduce-and-destroy pattern. Reaching that state of awareness may be difficult, particularly if the cause of the person's inner pain is unclear.

Rina I will accept any praise from such a consummate writer . Feel free to critique though. My first hubby used to call him Jelly Bowl.

Dan, Thankyou for such a considered response, you put things so well. To me, love is the crux of the matter. I honestly believe people can l earn how to love, as it is a doing thing. Commitment comes out of that. Feelings are a bunch of chemicals. Nice to have, but secondary.
In cultures where there are arranged marriages, they understand that love can grow, if you treat each other right. I'm not saying that method of partnering is wrong or right, but the principle is correct. Love is a doing thing. In that context , why couldn't a person be taught how to love?
Jesus commanded us to love. He didn't say "if you feel like it". Sometimes it's a very hard thing to do. Sometimes "tough love" is the answer, but needs to be delivered with cushioning. Always, the other person's welfare should be in mind. Our society, since the 60 s has told us to put ourselves first. I don't think that's been helpful, especially in marriages and families.

I have to confess that I've learned to be less honest as I've grown older, but does that make me a bigger liar?
Technically yes, but it's actually because I've become more aware of other people's feelings and prefer to be less abrasive.
Do I think I'm a fundamentally honest person though? Yes.
I think lies are the sugar of life. Most people love it to add a little bit of sweetness. Too much and it becomes sickly. Get addicted and you're on the road to obesity which can be very damaging.
I guess it's like everything, it's the degree and the reasoning behind it that matters.
It's also interesting that women and men often lie for different reasons. Women do it to oil the wheels of personal contact and save people's feelings, men do it more to enhance their status and how people see them.
I'm a bit of a fan because I can see the huge benefits of it and would hate to live in a world where everyone was completely honest. I guess it's other name is diplomacy.
As for people who make themselves up, or their lives, I think that must be exhausting.
I've met a few but they usually reveal themselves pretty quickly and once you flag someone as that kind of liar, it's pretty much game over.

As for the love angle, again it's degrees. Some arranged marriages do work very well, and some love marriages as we know certainly do not. I agree Cath that you can come to love someone over time. It's all about what you find out on the journey. That's what makes the difference, and that takes time.

I love it when friends are honest with me. Get in thrash it out, come to some kind of understanding. What I hate is being dumped. It's cowardly, and I'm afraid I will give up on the person. Walk away and never give them another thought.

I never question friends fundamental honesty as luckily I don't think I've ever been friends with someone that was that way inclined.

The only friends I've ever walked away from (I can think of three in my whole life) have either taken liberties over a long period of time, or been in my opinion, domineering and abrasive.
Sometimes it just becomes clear the angst a friendship causes, outweighs the benefits of holding onto it. Besides which I don't think they minded too much because when you've reached that tipping point, I'm pretty sure it's a two way feeling.
I guess it's much harder when one person isn't at the same crossroads as you.

What if both parties are dominating and it's an even match?