ONLY A MOTHER COULD THINK....

My daughter is beautiful. She was a pretty baby, lovely child, and now, despite the usual acne, and thanks to my Dad, who paid almost $10,000, wearing braces, still beautiful to me. Last night I took pictures of her, her mouth in a huge smile, her eyes shining. 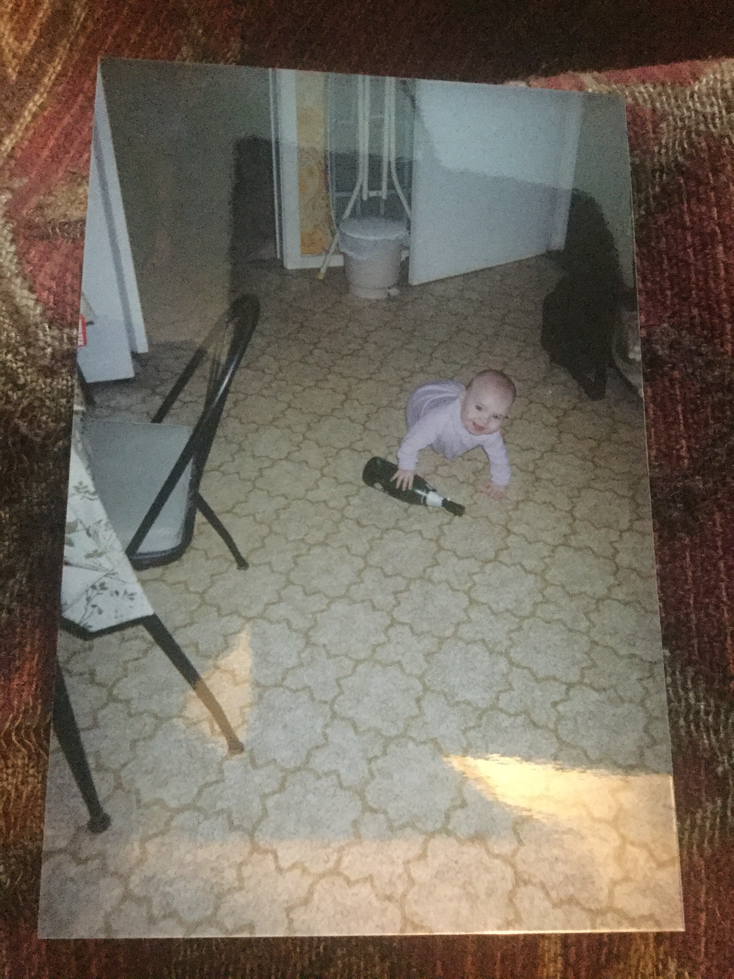 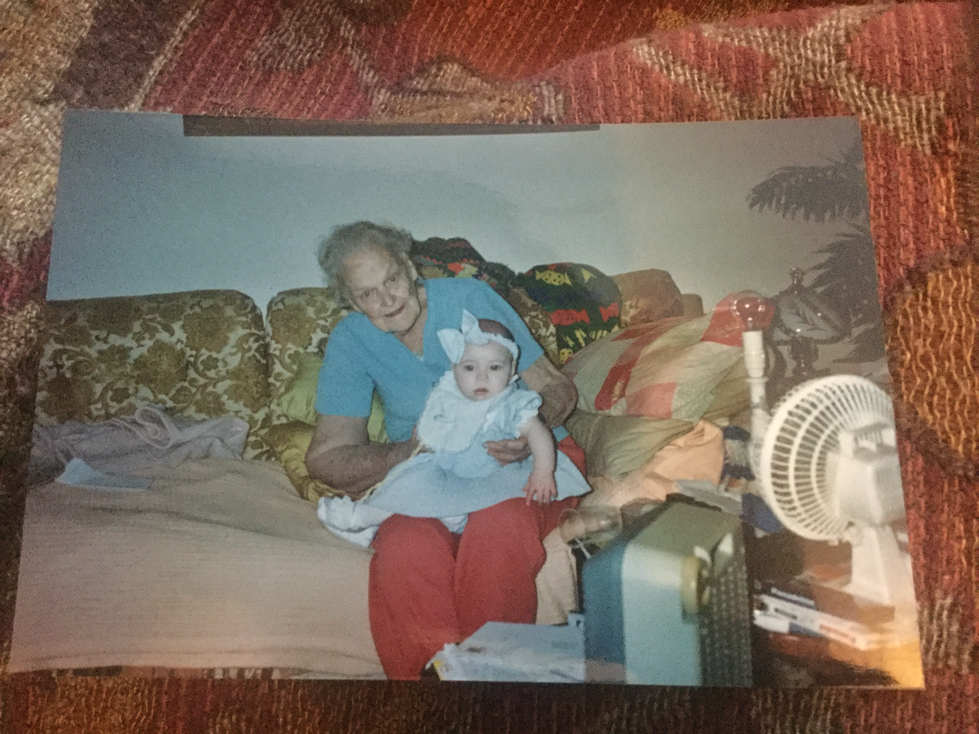 
As parents, we have always called her "pretty" and "beautiful". We have called her funny, clever, artistic, (but never tidy). Creative, but not organised.

My parents never called me pretty. Not even on my wedding days. I thought my mother was beautiful, but either she didn't think I was, or didn't want to say it. Maybe her parents never said it to her, I don't know. I grew up interested in makeup, nails , fashion and hair. I made the most of my appearance from the time I started to earn my own money. I got my ears pierced. I did makeup and clothes on other people, at one time, as I got pretty good at it. It's significant that I had boyfriends and husbands in my life, from age 16 , without much of a break. I didn't have to learn true independence, how to change a tyre, for example, even when I lived alone. I think I always needed someone to think I was special.

My parents cared about school and university grades, not appearance, so as long as I was neat and tidy, my clothes went unremarked. I'm appreciative they bought me clothes and took care of them until I earned money. They did buy me braces for my teeth, and I'm grateful, as they were expensive even back then.

From age 16 , I started using my Mum's makeup foundation mixed with white zinc cream , as my skin was Celtic fair, dabbed on to cover my zits. I would wear her mascara to school as my eyelashes were long, but strawberry blonde at that time, and matched my auburn hair. I did not think having Celtic looks was pretty. No one told me otherwise. I didn't think my long wavy hair was pretty, so I curled it at night. Now that it has darkened, and I have greys, I now know it was lovely back then.

At around age 17. It must have been Winter as I was wearing a jumper (sweater) under my dress. 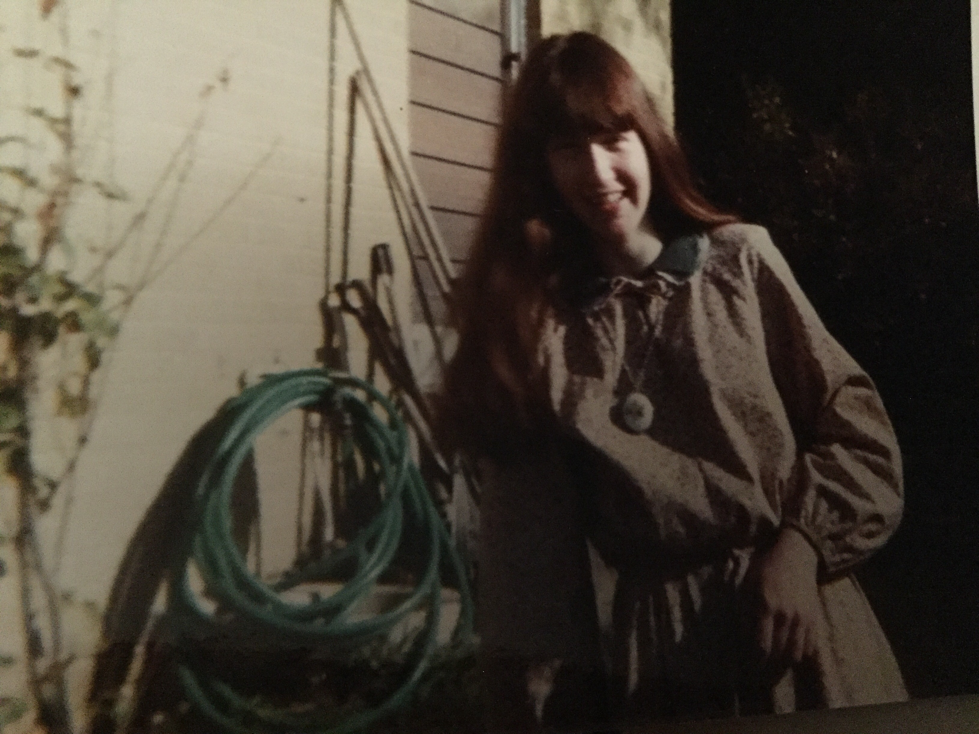 With Miffy the dog 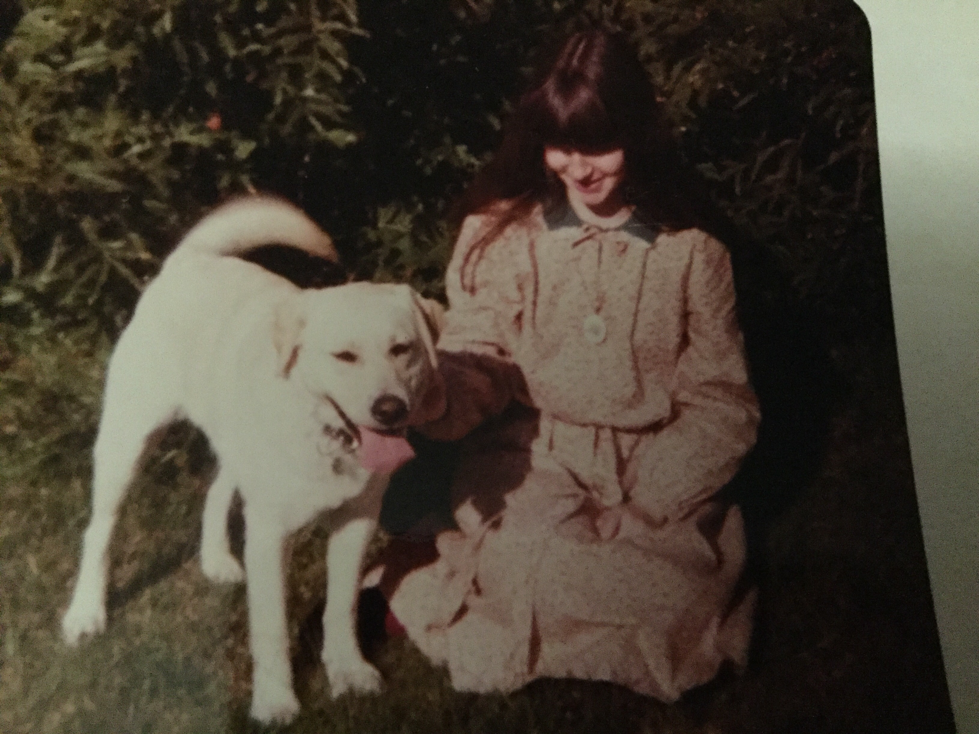 For years I have tried to get that auburn colour back . I used my Dad's razor to shave my legs. If my parents knew about me using their stuff they said nothing. I got $2 a month pocket money, which I spent on gifts. Their priorities were study and music lessons. Fair enough, I really appreciate it. Still, there was a dimension to me that wanted to be pretty, for someone to say I was.

I think every parent should think their daughters are pretty, and say it often. If your father tells you that you are attractive, you're unlikely to fall for any man who says those things, you will be more discriminating. You will be comfortable to spend periods of time without a man. If your mother has always told you, you're not likely to get unnecessary plastic surgery.

We crave the approval of our parents. My hubby is a stubborn man, who can't be told what to say, or think, but he's always called his little one "pretty" and "beautiful". I buy my daughter age appropriate makeup and proper acne wash, not the oatmeal soap that was all I was given for my zits, that had no effect. I want her to have good self esteem, and fit in with her peers. I treasure the little shopping trips with her, even if it's just shampoo we are buying.

Why am I bringing this up with you today? Because I've seen several opinion pieces lately saying that we should not call our daughters pretty or beautiful, for feminist reasons. Then today I saw this video

I disagree. We should point out our kid's talents to them, their achievements need to be extolled. However, in every society, appearance is important, like it or not. Unless you take down an entire beauty industry, daughters  everywhere will continue to be exposed to society's expectations. I saw some comments under those articles, by women wishing their parents had called them pretty. I understood where they were coming from perfectly.

I have a friend I called pretty and beautiful. That was just the way I saw her. Later I found out her father had always called her fat. Little wonder she doesn't think highly of herself. This week she is having a birthday. She is still beautiful, as the years go by. Happy Birthday, if you're reading.

Please write your opinions about bringing up girls and experiences in the comments below.
Posted by Running on empty at 16:13

Here's the article I referred to. Very important to read all the comments underneath. Almost all said they had no problem with the word pretty, for various reasons.

It's better to have some self confidence than none. If you think your mother doesn't think your worth it how will you see how amazing you really are.
You don't need to make her vain just don't make her blind to herself.

I don't remember ever being told I was pretty and I can't remember ever feeling a real need to be either. Besides which, I kind of knew I wasn't. That's not the same as not wanting to be gorgeous, which of course we all do, it's just a fact that a lot of us aren't.
My dad used to say, average is awesome, it's such a huge club and the best one to be a member of. He wasn't talking about looks in particular, he was talking about not being troubled by not being 'special' at anything in particular. It's really just fine to be you.
My big sister was the 'pretty' one and she had a knock out figure too. I was ever the skinny, knobbly kneed, flat chested awkward one and in my teens I almost used to look at her like some kind of goddess. Emphasis on used to. My worship phase was very short lived, as were her looks. I can't say her fleeting spot in the gorgeous brigade ever done her any favours either, in fact it probably still haunts her, hence spending £800 on a photo shoot to make her look like a sex goddess a few years ago which was ridiculous. Let it go, it's long gone, and a bit of fancy lighting and Vaseline on the lens wont fool anyone. Get over yourself.
I see 'looks' for what they are. A transient gift that should not be celebrated in any way as much as they are. Maybe then it's value would decrease and less fortunate souls wouldn't feel so unworthy.
It's not that I don't think it's good to comment when someone looks nice, and I often do, but it's much more about what they've chosen to wear or their hair etc. It's more about the effort they've made I suppose, and even ugbugs can get a look in then.
I'm pretty sure you tell your daughter many things other than that she's pretty. That's lovely. It's when it's becomes a narrowed focus that I object to.
It has its place but in reality, I've seldom seen a person that is actually beautiful, and the ones that are have never been so just because of the way they looked.

I don't have a problem with boudoir photography in the marital bedroom, hey if it spices things up, why not. I don't have it, but that's more about finances with a kid still at home. I've seen photos of you, Fizz and you are pretty. It's a trap to compare yourself to your sister, we stand on our own in life.

This is the longest blog post I've ever seen in my life. Ok I think it looks longer because the column's narrow and the font's large. That's understandable though as some people might read it on mobiles so a large font helps.

My grandmother on my dad's side told us that he was such an ugly baby, she would cover the pram when she took him out in public.

It's hard to imagine that feminists are particularly happy people. All they seem to do is complain about things. Only when they have reduced the female of the species to an unremarkable, featureless version of its former glory, will they realise that they've thrown the baby out with the bathwater. Well, that's one side of the coin. The other is that they're empowering an entire half of the population which has been unfairly misrepresented and abused for aeons.

My impression is that raising a kid involves something like: a) conveying to it that you care about it so that it think's it's worth something and b) guiding it through appropriate challenges and lessons so that it knows how to pursue and avoid things in life

Of course if you've given birth to Damien, Chucky or Kevin McCallister, it becomes harder because they'll naturally do what they want and not listen to you.

When we talk about overvaluing beauty, such a thing is absolutely priceless so it can't really be overvalued but if we mistake the beauty for the person and vice versa, then there can be a problem because life is multidimensional and while modelling jobs require good looks, most other jobs don't (although some of them actually do because some people are shallow and fickle) so it's important to derive self-worth from other areas too.

Unless the kid has somehow realised that self-worth is inherent and doesn't depend on how clever or kind or good looking or rich they are, or even what their parents thought of them. If you manage to raise a kid like that, take the rest of the week off, your work is done.

In other words, I agree with what Fizz wrote.

When I was growing up I only remember one person telling me I was pretty and I was very young, maybe 5. My mom told the person not to say that where I could hear. I don't know why, but I do remember it, so it must have made an impression on me. I think it was old school beliefs. Throughout my youth my mother was never critical. If I said something critical about someone, her reply was always, "It would be a boring world if we were all alike"....to this day that is my belief as I love the quirkiness and difference in people.

When we are growing up I think we naturally compare our own looks to others, sometimes we fall short and sometimes we feel "pretty" comparatively. It must be a natural thing to do. I have known women who don't have great features and yet for some reason were very attractive in my eyes as well as others. I think it has to do with confidence. It is that inner self confidence and self esteem that makes a person attractive. So...pretty is different than attractive in my mind...one is pretty to look at and the other is interesting to know, although a lucky person could have both qualities.

It has been proven good looking people have an advantage in the business world, but it can also be a detriment. People expect more, sometimes even claim your success is because you are pretty. Part of me thinks love, and compliments of achievements are more important than emphasis on looks. OTOH a child needs to feel attractive. I have heard a parent say to a child her outfit makes her look fat....horrors!!! How easily you could crush a child and set them up for a life long complex. Maybe what we don't is more important.