I took my teen and her friend ten pin bowling this week, to Wyncity Bowling, Morwell , Victoria. I will show you a photo essay, then my  poem, as I was angered by bad sabre rattling from North Korea while I was filtering the photographs.  Children should not have to grow up in fear! 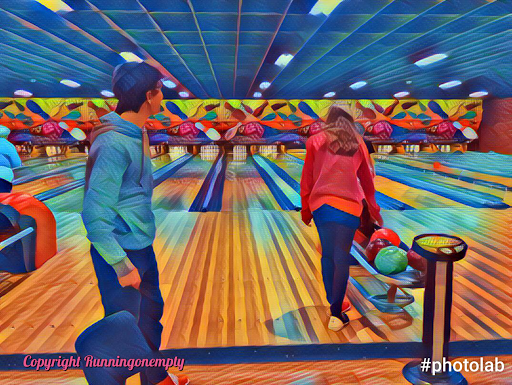 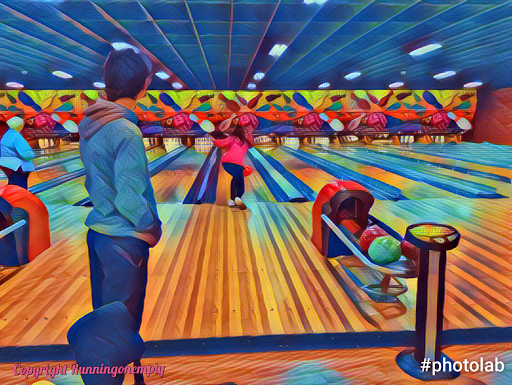 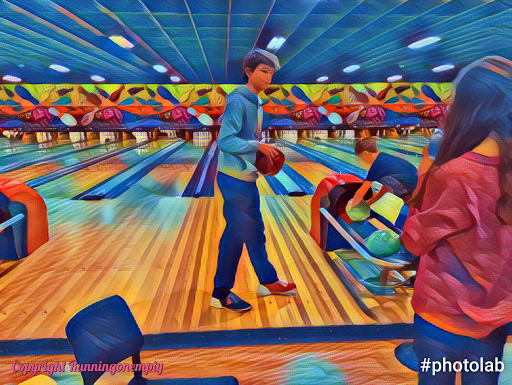 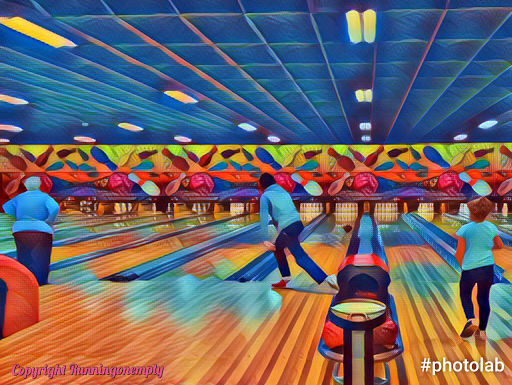 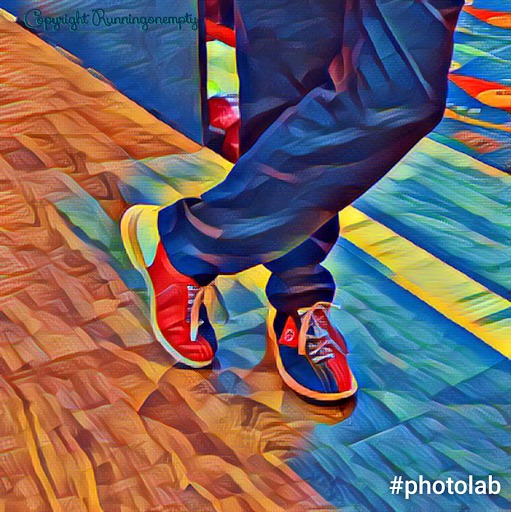 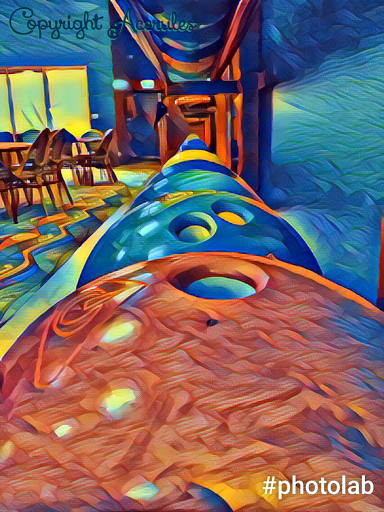 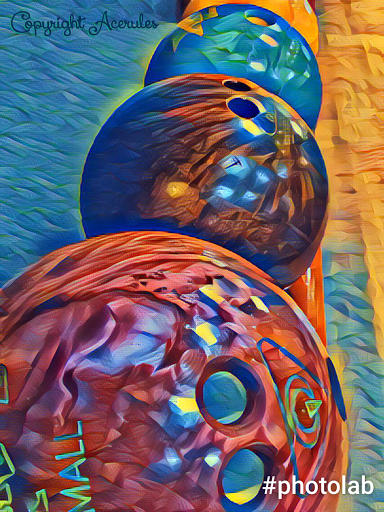 A chair back by Ace: 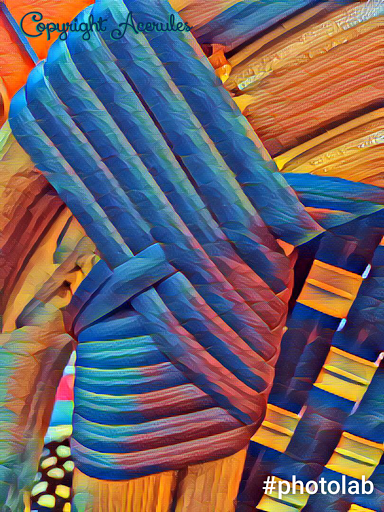 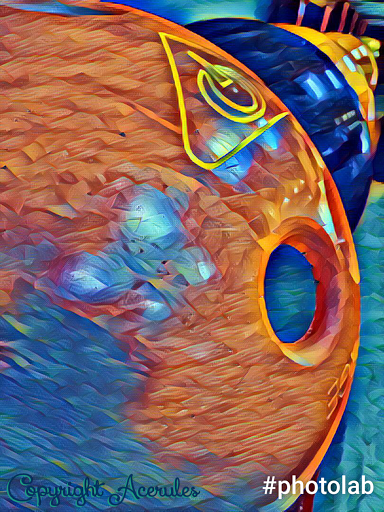 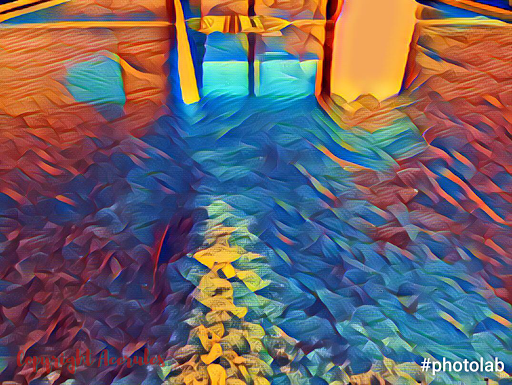 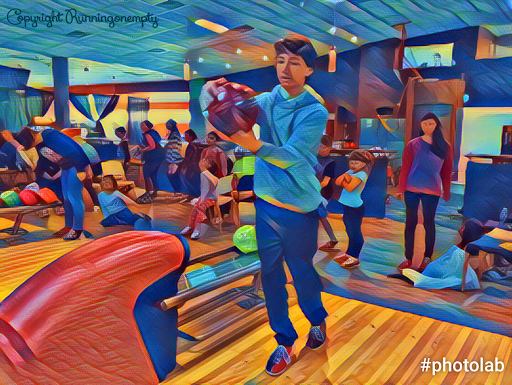 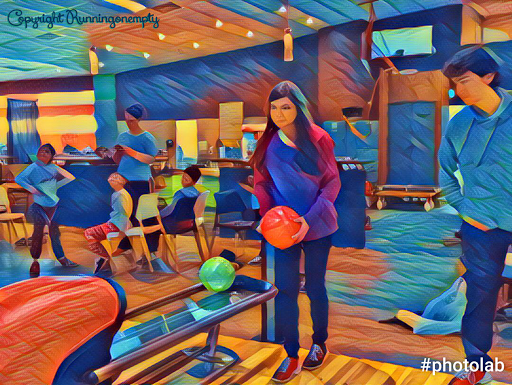 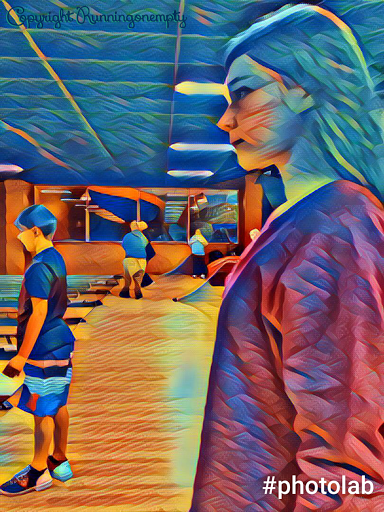 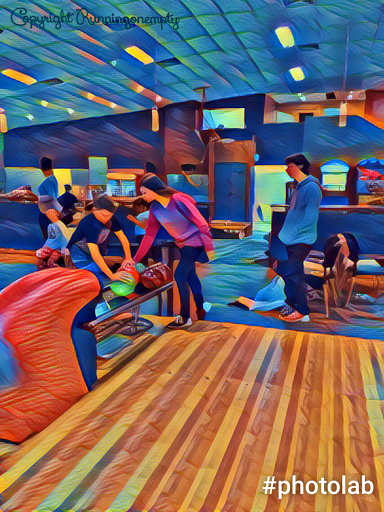 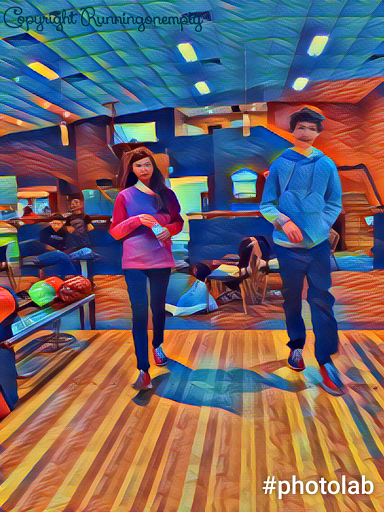 On the Arcade games: 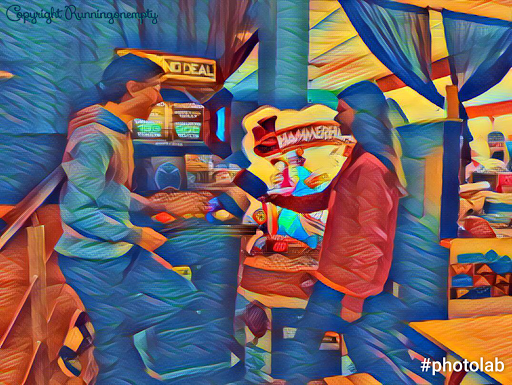 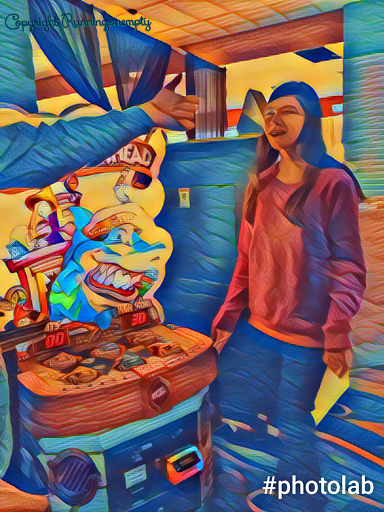 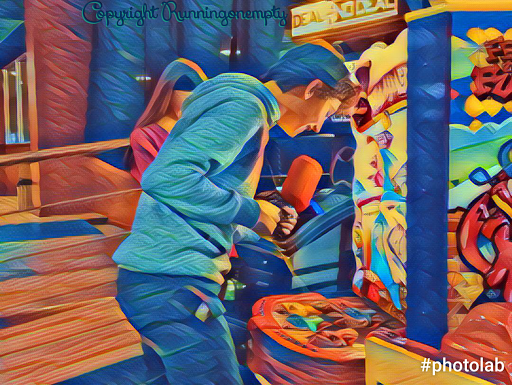 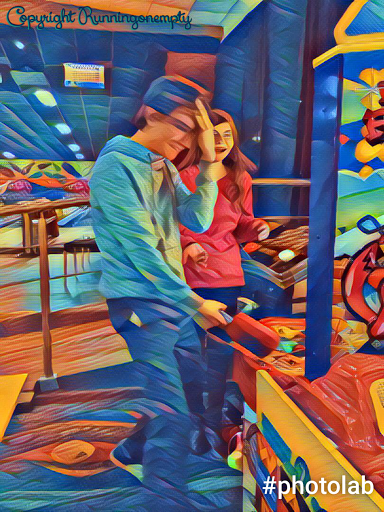 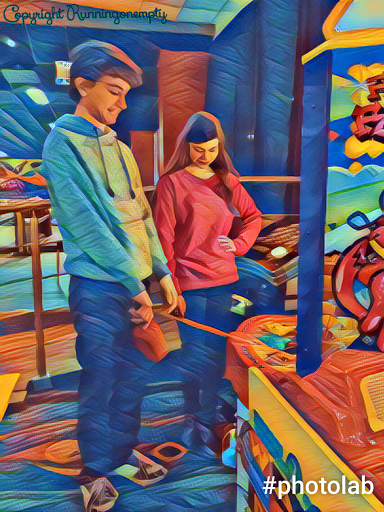 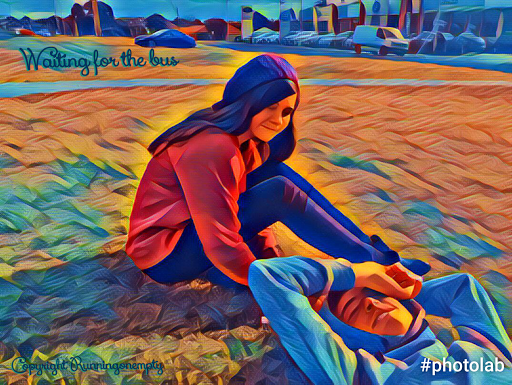 If they're not going to

where to be when it hits?

In a bowling alley?

if you're on fire.

Bowl until you expire.

(Paddock pigs are cooked and bloated).

but the electric's down,

no one to fix it now.

when the diarrhoea hits.

and every internal tube

Tom, go get the ball

Get up on your pins

* Advice given to the public in Australia, especially schoolchildren , on what to do if caught on fire. Also how to bowl, sort of.

** common Australian tree that has bark peeling off in large swathes all the time. The outside of the bark is tough, but the inside layers are soft and white like tissue. Some aboriginals used it for bandages. 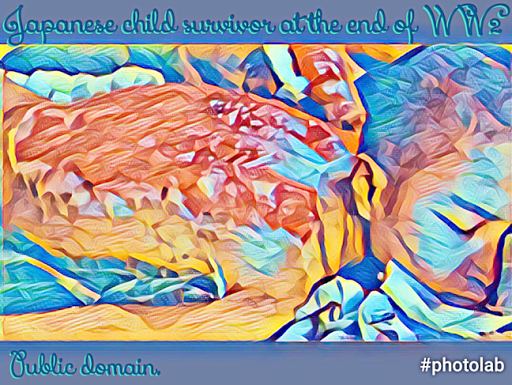 In this song by Guy Sebastian, one of my favourite singers, he plays quite a few of the parts.

cute poem link
Below, bowling with dark humour, in Richland, Washington, USA
link to bowling alley
Posted by Running on empty at 20:03

Some great photos on this post. My interpretation of the poem was that all hell broke loose after they were taken. Did you manage to make it out of there alive?

Of course, my poetry interpretation skills are pretty much non-existent.

Thanks for asking me, mate. While I was editing the photos and putting filters on them, (tedious work), a news flash came over with the leader of North Korea threatening war with US, very belligerent. He didn't like what US officials were saying. It was a bit more nasty than the usual.

I started thinking what it would be like to be in that bowling alley if a nuclear bomb hit the local power plant. I did some research on the likely effects and made the poem. It's a mixture of what we saw the day we were there, symptoms of radiation sickness, and peppered with bowling terms like spare, strike, and Kingpin, but with dual meanings.


I forgot. The poem was rewritten a number of times, the third draft I took out the swear word substitutions. I was very angry when I first wrote it. What sort of countries allow idiots to run things? It's insane. I looked at the photos of these innocent kids on their last day of school holidays, what sort of world will they have to emerge into? I deliberately contrasted the photos of them having a safe, good time, with the one of the Japanese child with his skin flayed off his back by a WW2 bomb, from the Nagasaki museum. We are so close to nuclear obliteration, and getting closer all the time.

Loving the bowling song video. Who knew they could do so many tricks?!

It did remind me of the 70s/80s when we had public information films screened nationwide about how to protect yourself if a nuclear bomb went off. I'm not sure if people really paid too much attention to them or not, but as a youngster, I don't think I did. It all seemed so unlikely.
Ray Bradbury (I think that was his name) made quite a famous cartoon film about an elderly couple coping with it, which was quite poignant.

It's an horrific prospect should one be dropped but I suppose I'd rather rely on a sense that it's just power postering.

Oops, it was Raymond Briggs. Got my Rays mixed up :)

What a nice bowling alley and the dual meaning was interesting. I can understand your thinking about "nuclear" after reading their bowling theme coming up. It looked like a fun innocent day contrasted against what could be. All the more reason to join the kids and enjoy the moment.

I used to love bowling til my knee started getting where I didn't think it could take it anymore and I felt it might give way at the end...that would have been a drop! Talk about Stop-Drop-Roll. I will never forget the lady that threw her ball so hard it went into the lane beside her....she had a hard time living that one down. The best I ever bowled was when was as a beginner with rented shoes and ball. I got high game for the league and never matched it again after all the years of bowling after that. It is one of those games the more you learn the harder it seems to get. Boy, were the oldtimers on that league ticked with me for winning that. Believe me, it wasn't because I knew what I was doing. Not only that, but I got a low handicap and it hurt my team for the year.

Nice to see you here again KE.
No, the link at the bottom was in USA. Not our bowling alley.

I'm interested in you doing so well before you were taught. Having it in my family, I'm interested in studies on Gifted and Talented. Some natural gifts might be able to be mucked up by the wrong teaching. Studies have shown that the gifted think can differently, - their brains can work in different pathways, to the norm.

As a case in point, my son was diagnosed G&T . He refused to do jigsaw puzzles looking at the box lid, or by starting around the perimeter, like normal folk. He mastered jigsaws far beyond his age range, despite not doing them the normal way.

Or maybe they just gave you bad advice.

Sorry, that should read assessed G&T, not diagnosed. Also should say "can think". Just woke up.

It is interesting that people often perform better before 'expectation' settles its weight on them.

I've often remarked on auditions for shows like the X factor when the first one is outstanding but after that the wheels of so called expertise and professionalism seem to destroy their sparkle. They start off looking natural and at ease but are quickly packaged beyond recognition into grotesque fashionistas. "What the hell have they done to them" "OMG Put then back in jeans n t-shirts" " Christ what on earth do they think they look like" are oft heard laments in my house.
The showmanship seems to ruin their natural talent.

I think some people respond well to pressure but just as many have a negative reaction to it.

Maybe gifts are within many, but unfortunately very few have either the determination, fortitude or luck (or probably all three) to turn them into more than memorable moments.

PS I baked a cake once to take into work that was so delicious I had emails requesting the recipe and begging for any leftovers to take home. Never was able to repeat THAT taste despite several attempts using the exact same recipe :(

I am a 'thinker" by nature....and I can attest to the fact overthinking/analyzing can be paralyzing. Much better at times to just have no expectations and preconceptions. We are much more likely to be pleasantly surprised and pleased. If only I could remember that.....

Fizz, I am curious, what was the cake? That is funny it never turned out the same. Maybe it was the company or the moment? Whatever the reason it was memorable for you.

Running on empty...It certainly sounds as if your son thrived on being unorthodox. I can imagine he was a challenge. No wonder you are interested in phycological study.

I love psychological challenges myself. When I was in sales it required a lot of instinctive or learned psychology such as body-language and other subtle clues to persuasion. It helps now to spot someone who is selling something to me because they seem very transparent. I suppose that is the analytic senses at work again...haha...

Hi, Fizz, Guy Sebastian, from the second video, sports short hair these days, but when he won the talent show, he had big fuzzy hair. It was so out of fashion, but his talent got him through.

KE, I had to do the psych subjects as a young woman in my OT course. I did well at them. They were easier than anatomy, all those Latin names to remember!
When my son was definitely assessed gifted, I asked for reading materials from the library, which they ordered in. I read 26 books and watched two videos, on G&T and ADHD at that time alone. I sure needed them.

I've never understood my hubby's attitude that you don't need to research to be a parent (or dog owner). Parenting books are a great resource, I take out of it what works for me.

KE My cake was a Victoria sponge with a white chocolate creme fraiche and cream filling, as well as a red n black fruit compotte, laced with a raspberry liqueur (can't remember its name, Chambord or something)
The sponge on that occasion was just perfect, as was everything else. But afterwards I found it really hard to stop the cream going grainy when I whisked the melted white choc in. Also the fruit was either a bit too tart or too runny etc.
Perfection is a rare beast.

I'm curious about selling techniques because its a life long puzzle that the amount of money spent on advertising is really worth it. I know it must be, but there are so few I an ever remember, or sit and think, Wow, I'm defo gonna go out and buy that now. In fact I can't think of an instance when it's happened. Selling to me face to face is kind of the same, if I want something I'll buy it, if I don't, I won't. I did once go into a hair salon to buy a particular conditioner I liked and was told it wouldn't work without the shampoo. I begged to differ and told her it had done just fine so far and I'd be the judge of that. I'm very twitchy about being told anything. She clearly needed some training in the powers of subtle suggestion.

Cath you know men don't like taking instruction, least of all from a book. Mines never read one in his life.! He's too busy 'doing' things.
I kind of get that. Readings not for everyone.

I don't know much about Guy Sebastian but I do like big fuzzy hair on some people. Did he look better with it short?
It's the clothes they dress them up in that make me squirm too. Youngsters in frocks you might expect your Aunt to wear at Christmas, killer heels they can hardly walk in, sexed up or trussed up like chickens, or ballgowns they look supremely uncomfortable in. The lads don't fair quite so badly but I do hate the ridiculous suits they rig them up in sometimes.

ROFL tell us what you really think! God I miss you when you're gone Fizzy!