The following post was written by Fizzfan, from the U.K. Thanks, Fizz!

RIGHTEOUS RULES AND LOONY LAWS.COME ON!

WE'RE EXPERIENCING A BIT OF A HEATWAVE AT THE MOMENT AND ONE PARTICULAR RECENT NEWS ARTICLE MADE ME RATHER HAPPY.

A group of teenage boys confounded the school rules of not being allowed to wear shorts by all turning up in skirts.

Slam dunk to the boys!!!

Things like this put a big smile on my face because I'm a bit of a rule breaker when it comes to utter nonsense and people in authority relying on them without sense or reason.

Latest update is that through media exposure of their incredibly unfair ruling, the school has decided to change the rule from next year!

WHY NEXT YEAR!?!  THEY'RE STILL BEING IDIOTS!!!

It would have been sooooo much better to have just smiled, congratulated the boys on their imagination and ingenuity and immediately given them the thumbs up to wearing shorts.

Anyway, it got me thinking about other stupid rules which led me to discovering these lovely laws of utter lunacy.

Persons may not live in a trailer as it is being hauled across the city.

Persons may not allow “attractive nuisances” to exist. ???!

In a place aptly named Tombstone, it is illegal for men and women over the age of 18 to have less than one missing tooth visible when smiling. 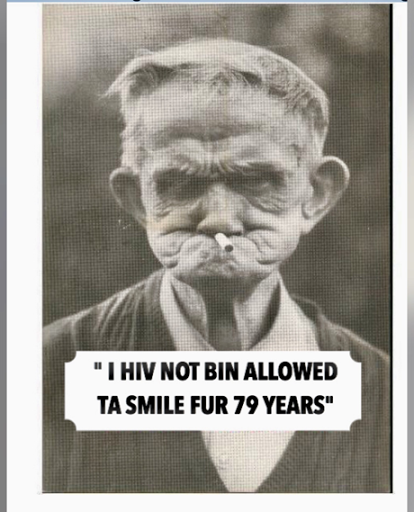 It is illegal to have a sleeping donkey in your bathtub after 7 pm. 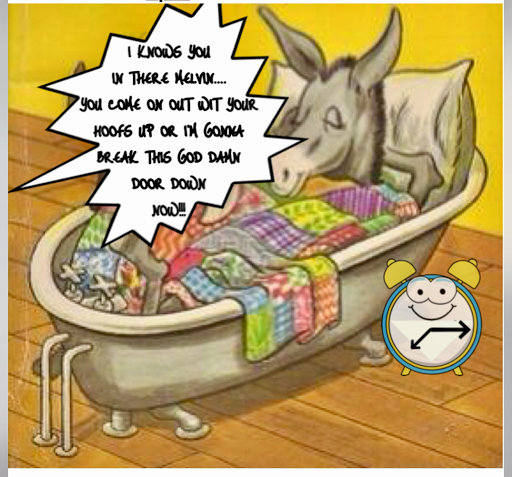 No vehicle without a driver may exceed 60 miles per hour.

Who exactly are they gonna charge if this law is broken???

It is against the law to eat in a place that's on fire.

Was someone once so enthusiastic about roasts they decided to experiment on themselves?

In order for a pickle to officially be considered a pickle, it must bounce.

Well that's a weight off my mind.

If an elephant is left tied to a parking meter, the parking fee has to be paid just as it would for a vehicle.

Did someone once dream up an excuse for not buying a ticket by writing, "But I couldn't get one, there was an elephant tied to the meter and it trumpeted at me and I had to run away!"........So the person reading this will have thought,  Phwrerrgghh, what nonsense, I'm going to double your fine for making up this ridiculous story........!???      But wait a minute, what if there are people with pet elephants parking them for free?......You can't be too careful, this could be a tidy little money spinner......."Maud! Make a note to bring elephants up at our next meeting".

It's illegal to fart in a public place after 6 pm on a Thursday. 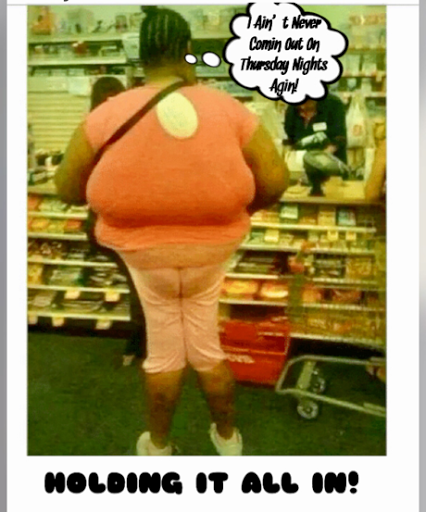 Having sexual relations with a porcupine is illegal!

Mind you, you can never be too careful. The numbing effects of a few Jaeger Bombs n Tequila Slammers and those old beer gogglescould make a mobile pin cushion look very attractive indeed.

Two drunk Russian tourists did try it out in 2009 and needed medical treatment to remove some quills that had become rather attached to them. They escaped the full force of the law by flying home where further treatment of soothing ointments was continued.

Only a qualified electrician is allowed to change a light bulb in Victoria, Australia

Apparently, rebels who defy this law could receive a fine of up to $10

Men are free to cross-dress, just as long as their dresses are not strapless.

(Yes, bare man shoulders should definitely be against the law and anyway a strap is always so good at drawing the eye away from all that stubble n hairy chests)

In Britain, it is illegal to import potatoes into England or Wales if you have reasonable cause to believe that they are Polish in case they have ring rot. 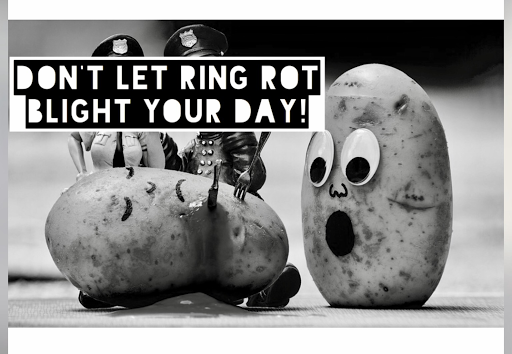 Fancy some Salmon for the Halibut? Well best Mullet over or you could get a visit from the Frying Squad because it's illegal to handle a Salmon in suspicious circumstances?

ONE FOR THE LADIES...

Since 1837 women have been allowed to bite off a man's nose if he kisses her against her will.

IF you're exercising your dog and some Royalty happen to stroll by with their pooches, head for the hills before your mutt sniffs any a romance in the air because a law enacted by George I states that: "The severest penaltys will be suffered by any commoner who doth permit his animal to have carnal knowledge of a pet of the Royal house."

AND LASTLY BUT VERY IMPORTANTLY, NO ONE IS ALLOWED TO DIE IN THE HOUSES OF PARLIAMENT.

(Thus far it has warded off all attempts for anyone to do this, but everyone is still eagerly awaiting the first corpses trial)

Fancy naming your child something unique? Well think again because you can only give your child a name that has been approved by the Ministry of Ecclesiastical Affairs. If your name isn't on their list you have to apply to them to get special permission.

In France those party poopers won't let you marry a dead person or name a pig Napoleon.

In Hong Kong there’s a law that allows a wife to kill her husband if she finds him cheating as long as she does it with her bare hands.

Flushing the toilet after 10pm in apartments is illegal.

I wonder if nearby house owners run emergency rental schemes?

AFRICAN POLICE WILL LITERALLY BELIEVE ANYTHING

2009 - Police in Nigeria held a goat on suspicion of attempted armed robbery.

Vigilantes seized the goat, saying it was an armed robber who had used black magic to transform himself into an animal to escape after trying to steal a Mazda 323.

No I kid you not (urggghhh) Belief in witchcraft is widespread in Nigeria and local residents even went to the police station to check the goat out.

It was also photographed in one nationalnewspaper on its knees next to a pile of straw. 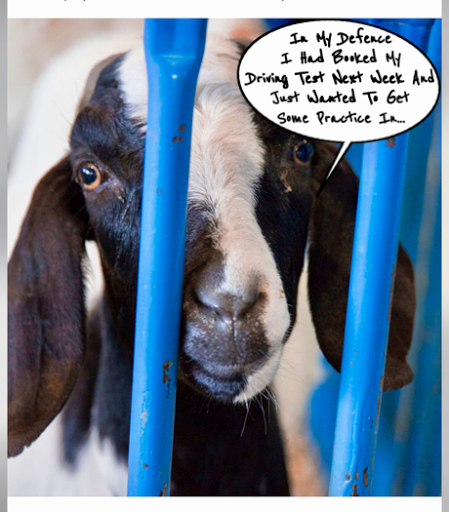 (Don't you just despair of kids these days)

AND FOR ALL THOSE REBELS OUT THERE, HERE'S THE FOO FIGHTERS WITH THEIR AWESOME 'THE PRETENDER'

Thank for the laughs with my coffee this morning.
The story of the boys reminds me that as a high schooler in the 50s there was an incident at school where a group of girls got sent home for wearing short shirts....in those days we called them kilt skirts and they were above the knee made from plaid pendelton wool, wrapped and pinned with a big decorative pin. We wore them with black tights and ballet type flats. Topped off with a furblend, or if you were really fortunate, a cashmere, crew neck, short sleeve sweater and pearls. It was the closest thing to a uniform worn at the Catholic schools today, yet all the girls were sent home because the skirts were above the knee and were considered indecent. To this day that is a favorite style as I look back over the years. Eventually the school relented and we were allowed to wear them. I can't remember why they changed the rule, but maybe it is because they were required to be worn with tights.
Listening to the Pretender prompted me to dance but watching the video started reminding me of our current President and I had to turn it off. The Pretender...how apt.
Thanks Fizz....enjoyed this

All acts of rebellion are memorable aren't they. The boys skirts looked remarkably like the ones you described by the way.

I never wore a full uniform from day one. It started with the tie and then quickly blossomed into the shirt and skirt. Best decision the school ever made was letting the girls wear trousers. This saved us the mad dash up the open staircases to stop the boys looking up our skirts from below.
The only other uniform thing I remember about school was the boredom. We had to create a bit of havoc to stay awake I think.

When I listen to The Pretender and watch that video I actually get chills. It's such an anti establishment anthem. Makes me feel about 20 again.
Sorry old Trunmpy sprang to your mind. What a downer to end up on!

Fizz...I was actually in a public high school...lol....but I see the Catholic girls now with pretty much the same outfit only the roll the skirt up so it barely covers...lol.
I was never anti-establishment...I married young and was too busy raising kids to get into the hippie scene. It's probably just as well I missed it. I would have been a wild child. Then once you have your own kids you do become establishment very quickly, just to survive and feed those mouths.
But I did go to my Jackson Brown music and listen to "The Pretender".
I still have to laugh visualizing those boys...

KE, who says you're not a wild child? It's one of the things I like about you!

My daughter rolls up her school kilt waistband, and ties the partial belt at the back tight on the Summer dress uniform. I'm gradually getting around to sewing the summer belt together. Next time I buy a kilt it will be long (to save money) so rolling it won't make it short. The latter is very expensive, like the bag, blazer and jumper. She lost so many jumpers they gave us one, which was nice of them. Then she left it screwed up in her bag with some old mouldy lunch and I can't get the stain out yet. I will have another go at it in the Winter vacation coming up.
Girls are not allowed to wear trousers there, unless for sport, then they have to change afterward. That was a problem with a transgender student, age 14, although the school was supportive, they would not allow them to wear trousers as they had been enrolled as a girl. The student then left.

I do hope the boys were all punished for wearing skirts. They should be there to learn, not to flaunt :)

That lightbulb rule is really most surprising.

Do you ever think of writing your own blog?


I agree, Fizz, but keep guesting on mine please, you too, Dan!

If anyone else wants to contribute a piece, you can through my email.

KE You're dead right about the having kids thing. It hit me like a sledge hammer. I suddenly had to be all responsible and normal.
Ewwwww.
Mind you I've never been able to shake off my mad Dads influence of being a hippy armchair radical who likes loud music and being a bit controversial.
Always happiest when I'm railing against 'bullshit' which was my Nans most favourite word and successfully ended a great many attempts at conversation. I loved her because she was funny, had no filter and had an hilarious dislike of men.

Thanks Dan.....I wouldn't have the first clue how to go about setting up a Blog and anyway I'm happy just pestering Cath now n then to accommodate my whimsies.


I am very grateful to you and all the other writers, Fizz!!