We need to prepare for it.

We need to fight for peace, while readying our defences. We need to do both.

On this 75th anniversary of the Japanese bombing of Darwin, Australia , in World War Two, we should understand, that Australia was not ready for that war. The difference was, that back then we had a manufacturing sector that could mobilise. Now, ours is being dismantled. (Who makes money out of war? The arms manufacturers. )

We need to be the peacemakers in the world, or we are stuffed.

" The attacks by Japanese bombers on February 19, 1942, devastated the US Navy and was the largest loss of life in Australian waters in history.
The most commonly cited figure is 243 killed and at least 500 injured or missing, but because many people were buried in hurried graves on beaches or at sea, it is unlikely the true number of dead will ever be known.
The attacks involved 188 aircraft launched from four Japanese aircraft carriers located in the Timor Sea, followed by a second wave of 54 land-based bombers, supported by more than a dozen ships, destroyers and submarines.
The attacks on northern Australia continued for almost another two years. " 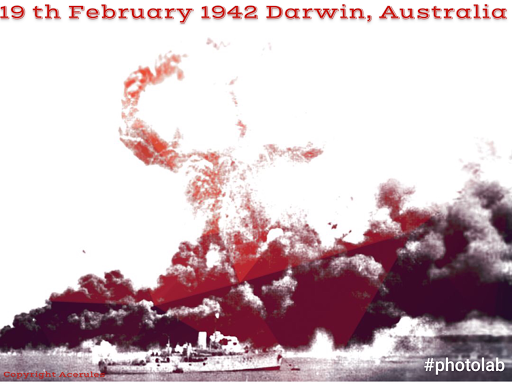 "Thirty aircraft were destroyed during the events of 1942, nine ships in Darwin Harbour and two outside were sunk, and some of the civil and military facilities in Darwin were destroyed.
The Japanese launched 77 attacks on the Top End until November 1943."  ABC News

More information on Wikipedia below. The book cited there, by Peter Grose , is very good, I have it.

safe link on the bombing of Darwin.
Posted by Running on empty at 16:22

So horribly tired of 'war' rhetoric. Despise everything connected to it. It shines a light on our species at its worst. Legalised murder. The horrors of it are not really examined and advertised enough. We should all be beside ourselves with total condemnation of it. How and why we have such a thriving industry connected to weapons is soul destroying when you consider what those funds could be spent on. I solemnly wonder just how much we've really evolved from cavemen whenever the subject comes up. Total sadness that we still haven't found a way to communicate effectively enough to make the whole subject obsolete. Please may it all be the mindless posturing of our politicians idiot mentality when we comes to not getting their own way.


Here in the West, most of the generation who knew war on their home soil have now passed on. We need to teach and study war history better so as not to repeat the mistakes of the past.