HELLO, HOW ARE YOU?

I was pleased to read this week that the two Koreas were talking on the phone, it’s a good start. Probably a lot of hidden diplomacy got them to that stage.
“South Korea Waited Two Years for the North to Call Just to Hear Them Say 'No' - “ Newsweek
http://www.newsweek.com/south-korea-waited-two-years-north-call-just-hear-them-say-no-770249
What if Australia was divided , Queensland and the Northern Territory had seceded , and the two halves called each other up decades later, it might go like this:
Bazza- G’day, mate.
Tommo- Yeah, g’day, we’ll see about the mate bit, that depends.
Bazza- okaaaay... how ya been?
Tommo- cant complain, same old. My Mum says to say g’day to your wife. Righto, shuddup Mum, I’m on the phone here.
Howyagoinmateorrite?
Bazza- Not too bad, not too bad.
how’s the weather up there?
Tommo- Only ten cyclones last month, you know, a bit wet. Yours?
Bazza- Flamin’ bushfires all over down here. Barbied Roos all over, saves cooking that night, anyways, haha. How’s that Trump guy, bit of an idiot, yeah?
Tommo- Oh, I don’t know, he’s in bed with Pauline, we got rid of all the Muslims, you know.
Bazza- hows ya boss man there, whatsisname
Tommo- bloody revered leader? He’s alright. Your’s?
Bazza- The President? She’s ok, they’re all pigs in the trough, know what I mean?
Tommo- Don’t I what. Bloody freeloading pollies.
Bazza- Yeah. So. What can I do ya for?
Tommo- well... its getting a bit flamin’warm up here, ya know? Too many mozzies. Some of our people, well, they’d like to pack a port, and shoot through down South.
Bazza- Oh, maaate, I dunno about that, I reckon you’ve got Buckley’s. You know the terms of the deal we made on Trivia Night at the Ettamogah. You stay up there with the bananas and mangoes, we get the cherries and apples. 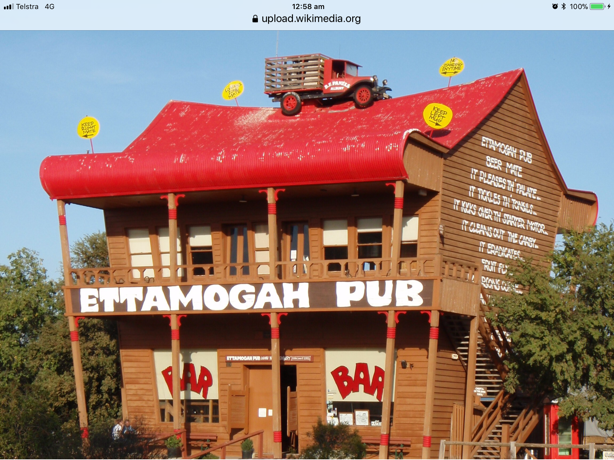 Ettamogah pub at Table Top, by Virtual Steve.
Tommo- Oh, give it a bit of thought, mate.
Bazza- I tell ya what, if ya want , you can send us your water. Build a mega pipeline down to here, throw in some rum and  pumpkin scones, and we could send you up some olive oil, potatoes and wheat and call it a day. Whadaya think of that? I tell ya what, second thoughts, we’ll do ya a favour and throw in  Canberra too, no extra charge.
Tommo, (shocked)- Canberra? Pollies ‘n all? What are ya tryin ta do, ya bastard, start a war? Send them, and we’ll send you cane toads by the truckload! That’s a deal breaker, piss off.
Bazza- Righto , don’t get ya knickers in a knot, see ya later.
Tommo- Not if I see ya first.
Bazza- You wish. You can keep ya pumpkin scones, we’ve got bruschetta!
Tommo- Wrack off ya hipster bastard, geeze, no more black market avocados for your avo toast!
Bazza- Up yours, ya drongo,  talk to you in another 20 years, maybe.
Wait! Me missus’ been on the blower with your Mum. She says they’re putting on a barbie in Tamworth this March, we are all going apparently. You’re bringing the snags, I’m bringing the piss, she says.
Tommo- You bloody beauty, she’s got her head screwed on alright, ya missus. See ya there!
Bazza- Not if I see ya first!
Glossary
———-
Mate- friend
Missus- wife
Howyagoinmateorrite - how are you? Well?
Barbie - barbecue, (they burned to death) as global warming is supposed to cause increased cyclones and mosquito borne diseases up North, and increased more severe bushfires and droughts down South.
Pauline- Senator Pauline Hanson, far right politician originally from Queensland.
whatsisname - I can’t remember his name
Pigs in the trough - common term for politicians getting taxpayer paid entitlements.
Freeloading pollies - politicians that do not earn their keep. Australians do not get jailed for complaining about politicians, which they do, alot.
What can I do ya for? - what do you want?
A bit flamin’ warm -  hot. Australians tend to understate the weather. Flamin’ is a substitute for a swear word starting with the same letter, so is friggin’
Mozzies - mosquitoes
Port - said in some parts of Aus to mean suitcase, or school case.  Short for portmanteau.
Shoot through - leave, travel elsewhere.
I dunno - I don’t know
I reckon you’ve got Buckley’s- short for Buckley’s and Nunn, or none, meaning no chance. It is an example of rhyming slang in this country. Was also the name of a convict from our history, see link below.
Trivia night - games testing participants knowledge of trivial history, usually held in pubs (hotels) or church halls , etc.
Ettamogah pub- is a pub from a cartoon. Was built as a real pub / tourist stop, now there are a few in Aus.
Call it a day - that will close it.
Canberra,- seat of Federal government as I write this.
Cane toads - a terrible pest up North
Piss off - go away
Don’t get ya knickers in a knot- don’t get upset
Bruschetta - tomatoes and olive oil on crusty bread, Italian.
Wrack off - leave
Hipster - a movement that combines modern ethics with some nostalgic practices.
Up yours , ya drongo - a disparaging phrase.
Blower- phone
Tamworth - would possibly be a bit South of the border in this hypothetical scenario.
Snags and piss - sausages and beer/ wine
You bloody beauty - enthusiastic phrase of approval
she’s got her head screwed on alright - She’s clever
Now go back and read it again, then feel free to comment.
Buckley’s chance link
Posted by Running on empty at 01:30

That was a good read, and I didn’t even need instructions.......I felt like a fly on the wall....can you expand that story? It could be a seller.

Love that. At least send it to one of the papers and get some dollars in the bynk.

Well I'm Buggared, you lot must have bin the first cocks to get to aus, I think the Brits shipped yer out of the countree to git rid of that com talk, good on yer shiela, yer had me in tears, love yer to bits,, Bazza.

Here’s some Norfolk sayings (like where I come from)