Excerpts from The Fear sung by Lily Allen

The basis of over spending or over saving, certainly is fear. Having the stuff, or the overflowing investments, are a security blanket.

“When avarice takes the lead in a state, it is commonly the forerunner of its fall.”
― Alexander Hamilton

I would agree with that. It was seen in Rome, before the fall of the Empire,  also the 1880s before the recession of the 1890s. Eerily that repeated one hundred years later. Before that, of course,,there was the Great Depression following on from the Stockmarket insanity of the 1920s.

In ancient times, the city of Troy was supposed to have been very wealthy, sitting as it did in a strategically good position to tax transport. When it's Greek enemies came to plunder, they killed or enslaved everyone.

The fall of Troy 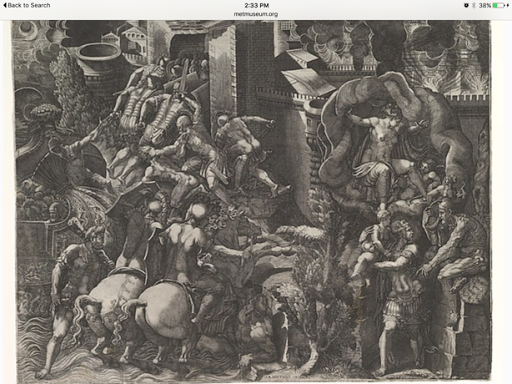 Question, for we in the Western World, are the huge influx of cheap manufactured goods , surplus to our needs, flooding into our countries and killing off our manufacturing, also a Trojan horse? Are we being lulled as we and our governments get further and further into massive debt?

"The greatest of wealth is the richness of the soul." Prophet Muhammed.

This is a great subject! I grew up being indoctrinated by my parents that debt = shame, and you must live to your means and work for whatever you want. Credit still seems very dangerous to me and other than a mortgage that I knew I could afford (fingers crossed I wasn't made redundant) I don't over indulge in anything, but thankfully I do have enough for treats like being able to go out for a meal maybe once a month. Successive governments have encouraged debt and I'm sure it's a form of control. I'm always very unimpressed with conspicuous consumption but love a bargain and people who buy second hand stuff and recycle. Youngsters are indoctrinated to be comfortable with debt now. You want to go to Uni, you have to take out a massive loan. You don't go to Uni, your chances of getting a good job is severely curtailed. When I grew up, you didnt pay to go to Uni but it wasn't necessary anyway, as you could walk into jobs from school that were pretty good and well paid. It's seems sad to me that I work with youngsters from Uni who are massively in debt and we're doing the same job. Much of higher education is completely unnecessary but again we've been brainwashed into thinking it's essential. Where are all the 'higher paid' jobs for all these extra students? They are non existent but let's not dwell on that as the government has done a fine job in supporting their 'dreams' and who cares if they're all trapped in debt for 30 years.


You always write well written comments, Fizz, shows you think a lot about the issues. It is harder for young people today here too, they have access to more technology than in my day, but less opportunities.

I just long for a realistic, responsible, balanced and fair society. That's why I have no faith in Governments. I have a huge sense that we've been drip fed utter nonsense for years and the only people that seem to have benefitted are the rich. When they are getting richer and the poor poorer, there's something deeply wrong. Going slightly off piste, I saw a doc on education in Sth Korea last week. They trounce us Brits in exam result grades so they sent some British teenagers over to see why. Well, they start school at 8am and when they finish @ 6pm they go on to after school clubs til midnight! No matter that their kids have astonishly high suicide rates, it's those grades that count! What the hell happened to common sense! Competitiveness has to be monitored. It's almost as if being No 1 is more important than life itself! We're nurturing a projection of perfection that only the few can attain and pressurising the young to think they must belong in that group. It's all such a house of cards built on toxic whispers of elitism. I can only hope we don't follow their example. We may as well give up being human and just get a micro chip inserted at birth that replaces our brains.


To fix governments we need to fix journalism.

The baby boomers are supposed to be the richest generation ever.

We have seen the same emphasis on academic achievement in Asian immigrants here. It seems to rely on the respect for parents, and the "tiger mum" concept, that has largely disappeared from Western culture.

I agree Fizz....Our government put the Iraq war on a credit card proving they don't care about debt..if they did we would have had to make sacrifices like they did in WW2...the thing is they wage wars because someone makes money from them. Eisenhower said "if we took the profit out of war there would be no wars" .

Couldn't agree more Kath. If there's an arms 'industry' worth billions I guess you have to utilise it somehow, even if the truth has to be massaged to get wars kick started. It's a hideous notion but I feel it's much closer to the truth then we're ever led to realise. If you isolated the expenditure on arms worldwide and switched it to being spent on construction, education, health and employment, who wouldn't want that? To me it's a grotesque monster that's been funded and allowed to flourish and is now totally out of control. It's one of the saddest aspects of the human condition that we've never fully recognised how horribly destructive and stupid war is. It should be ridiculed as utterly absurd but it's still glorified as heroic and honourable. Mind you, I do wonder if it's part of men's DNA sometimes. I used to help out in a nursery school and boys do love a toy gun and tearing around on machines. Is that taught or somehow innate? Is it really just a sad fact that human beings, however clever we think we are just cannot escape our basic instincts of aggression and need to dominate. Guess it used to come in handy for survival and hunting for food in prehistoric times, but now we have to channel it elsewhere.


Males have more testosterone, and have to be taught how to control themselves from a young age.

Thats the problem I guess. Even with our new age 'controlled' logic, intelligence and knowledge, we still just keep killing each other for land, oil, religion, domination, whatever....we just can't stop. It's built into us. It's such a basic and strong survival instinct that we just haven't evolved out of it yet. I think us humans are flawed by our capabilities of both intelligence and age old animal instincts. Even if we focused on the rational side of us we'd come up with excuses to harm, we'd just factor in revenge, or teaching those we differed from with a 'lesson', or even better, defending ourselves. Whatever we need to sell it, we will find a way to wage war. One of worst offenders of course is using religion. How on earth can something that's supposed to be about good be channelled into so much evil? We are bonkers. Sigh.