"Laziness puts one to sleep, and an idle person will go hungry." The Bible.

In "Madame Bovary" by Gustave Flaubert, the laziness of the title character led to her being bored enough to invent her own destruction. Her husband was very industrious, but she led a life of leisure. Homer Simpson is a cartoon character who parodies all those workers who sleep or otherwise waste their employers' time.

In the movie Wall E, which is excellent, I recommend it, the humans have forgotten how to do much for themselves and their every needs are serviced by robots

In Wall E, the humans have also made a wasteland of Earth, can you see how that goes together with Sloth? 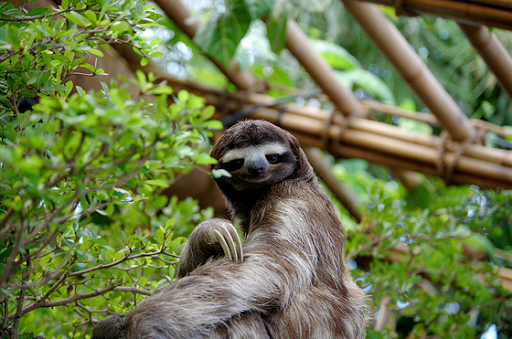 I do not know much about a sloth animal, but they sure are unusual looking creatures. Poor things are tied to a deadly sin. Perhaps they should take up drinking whiskey lol


Whiskey makes me funny, but I can rarely afford it these days.

Well, then not being rich has it's rewards;)

You are probably more right than you know. Not being rich forces people to be creative and inventive, though one could argue that being lazy makes people inventive.

One of my favourite sayings is 'Necessity is the Mother of Invention'. Who doesn't know that feeling of putting something off but then when it's been tackled and done, how good it feels. If everything is handed to you on a plate, or done for you, how can you learn the value of self achievement. Much as I love the Internet and all the convenience, entertainment and knowledge it provides, I'm pretty certain it's responsible for just as many negatives, if not more. I wonder if many of the modern day ailments of obesity and social anxieties and stresses would lessen if we went back to a time without computers and mobile phones. I'm guessing it would.


So true that work brings a sense of achievement.

They used to blame TV for obesity, now its the multi media. Parents need to enforce moderation.

Yes, I think the Internet has good and bad points. It's like real life but on speed. What I do know is I never would have made my wonderful international friends that I love, without the net. For that I'm very thankful. <3