Continuing my St Peter series, with the Miracle of the Loaves and Fishes.

What is a miracle? Do you have to be religious to see them? I don't think so. Seeing a baby born, watching a flower unfurl, all those cliché things, become magical when seen in actuality. The human body is a miracle. All of the resources of science still have not replicated what the brain can do. If you are down about anything today, watch this short video, and go for a walk among some kind of nature at your earliest opportunity.

So, in part one of my St Peter series, I discussed how Peter joined Jesus' group and walked around Israel witnessing Jesus doing miracles.

This miracle is described in all four books of the New Testament of the Bible. It occurs on Lake Galilee, again. Here is Matthew 14 : 13-21, from Bible.org. It is often called "THE FEEDING OF THE 5000", and follows the beheading of Jesus' cousin, John the Baptist.

13 When Jesus heard what had happened, He withdrew by boat privately to a solitary place. Hearing of this, the crowds followed him on foot from the towns. 14When Jesus landed and saw a large crowd, he had compassion on them and healed their sick.
15 As evening approached, the disciples came to him and said, “This is a remote place, and it’s already getting late. Send the crowds away, so they can go to the villages and buy themselves some food.” 16 Jesus replied, “They do not need to go away. You give them something to eat.” 17 “We have here only five loaves of bread and two fish,” they answered.
18 “Bring them here to me,” he said. 19 And he directed the people to sit down on the grass. Taking the five loaves and the two fish and looking up to heaven, he gave thanks and broke the loaves. Then he gave them to the people. 20 They all ate and were satisfied, and the disciples picked up twelve basketfuls of broken pieces that were left over.
21 The number of those who ate was about five thousand men, besides women and children.

Tonight for dinner, our family based a meal around five (Turkish) loaves, and two fish fillets. Acerules and I went to the bakery in the morning to get the "loaves" before there wasn't much choice left. The bakery was packed out. We thought that since Turkish bread was middle eastern, near enough. What we know from the Bible , is that it was not yet Passover, so we didn't need to get unleavened (flat) bread. Then I bought two fish fillets. Problem, there were three of us eating, but I remembered some vegetarian schnitzels in the freezer at home. You see, in my denomination, Catholic, we are encouraged to give up meat on Fridays during Lent. This symbolises that Jesus fasted in the desert for 40 days.  I forgot last Friday, but good today. I bought olives too, and olive oil for cooking and on the salad, as they were an important part of the diet in St Peter's homeland. We went to the park.
Fish cooking in foil with vegetarian schnitzels. The foil is open for the photo, but closed during cooking. 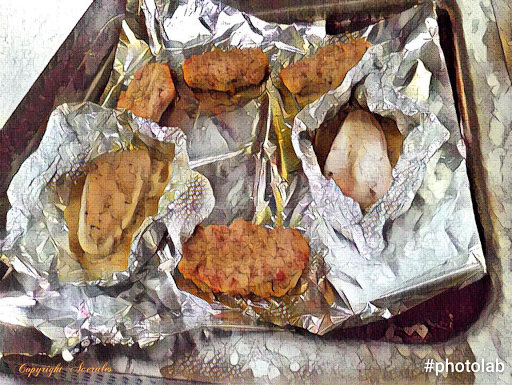 Maybe not that far off a meal in St Peter's day. We ended up making fish /schnitzel sandwiches with the loaves. Simple but tasty, and a fun exercise. There were not twelve baskets of leftovers, maybe because we forgot to say grace over the meal, like Jesus, but hubby will be taking a schnitzel and "loaf" to work for lunch. 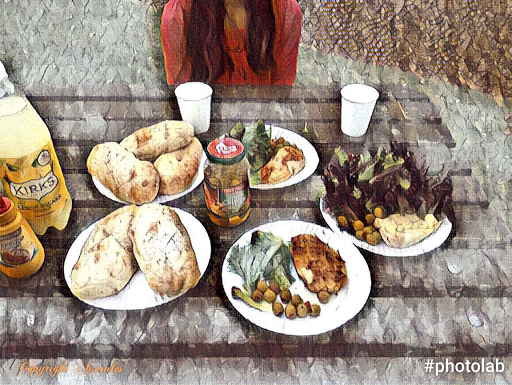 It was getting dark (beautiful red sunset, ) and I was getting bitten by mosquitoes, as being a lovely fine Autumn day, I was wearing a dress with bare legs and arms. It occurred to me that the mosquitoes on the shore of Lake Galilee might also have been  having a feast while the 5000 families ate loaves and fish that day!!
It is believed that the miracle occurred not far from Peter's home town.
Acerules went to a magician show yesterday with a friend. At the end, the performer described how to do three of his tricks. The Bible story doesn't. Over the centuries, various theories have been put forward as to how the miracle was performed, all falling into two camps. Either it was a supernatural work of God, or the outcome of sharing by the people. What do you think?

I went on Gofundme website, looking for a miracle. I found many, many, miracles. This one was appropriate as the half dozen of donuts was multiplied to $341,976 ( now closed.) I just love what human beings can accomplish if they work together. That is the real miracle. The link is at bottom of this post.

COMMENTS FROM THE APPEAL:
Linda Bridges
9 months ago

"What has happened here is nothing less then a miracle, this has 100% restored my faith in a Mighty God we have. To put you both in that same place at the same time nothing but God did this! I can't stop praying an crying. We as a Nation needed a miracle and we are watching it unfold before our eyes! Thank you all for bringing the light back we all needed it! I can't explain how much it means to me! #Onelove❤ Blessings and prayers to ALL!"

"Oh my! This made me cry. If had more than $1.08 in my account and i didnt have two kids to feed,I'd contribute as well. I hope Chauncy knows that many of us are pulling for him and his mama, and if it were possible, he would be a millionaire right now. What some of us lack in funds, we will make up for in prayers and positive thoughts for him! Keep up the amazing work, young man! You can do ANYTHING."

"Just goes to show us what a difference ONE person can make. God knew what he was doing when he allowed a determined young man (with the last name Black) to meet a compassionate young man (with the last name White). No coincidence there...so many lessons for us to glean from this. I am SO inspired and hope my donation helps on some small way. May God richly bless you both!"

"And to think...Matt only set this fund up for $250 to help buy a lawnmower. God works miracles when you least expect it. What a beautiful story ♥"

I'd love to read your views in the comments below. You don't have to be religious. St Peter part 3 is coming up soon.
Posted by Running on empty at 13:32

Email ThisBlogThis!Share to TwitterShare to FacebookShare to Pinterest
Labels: feeding of the 5000, Gofundme, leftovers, miracle of the loaves and fishes, ordinary miracles, Turkish bread, vegetarian schnitzels

I loved the song....I remember when my husband and I were younger and money was sparse...it seemed every time we were at the end of our resources we would get a surprise check or refund from somewhere. I don't know how that happened but I was always greatful and felt blessed. Now I feel blessed we can be the ones to provide the surprises...


Time and again I have seen how God works through people. Sometimes the most unlikely people too. It's good that you share with others. I'm sure they appreciate it.